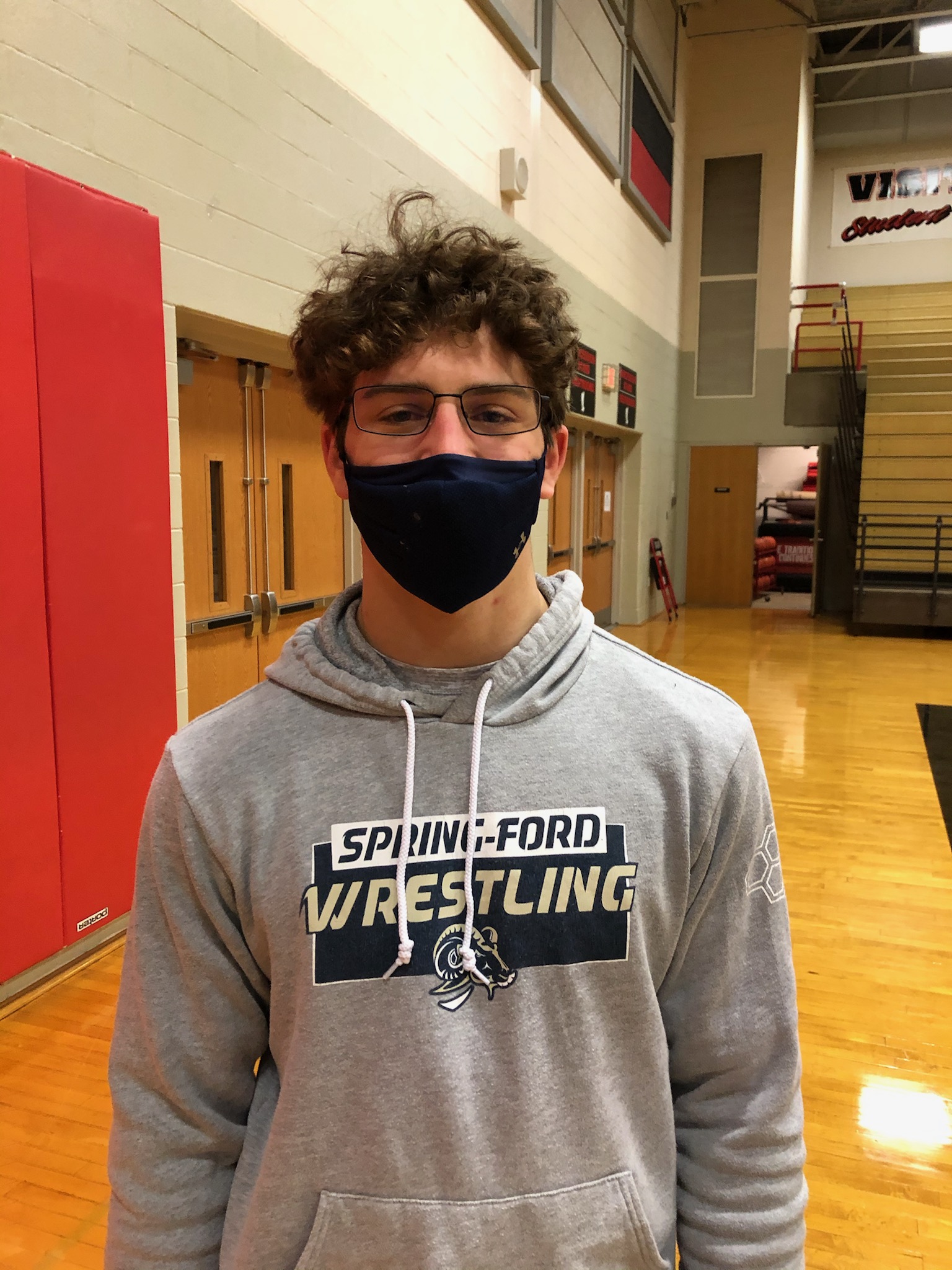 BOYERTOWN >> Under normal circumstances, the pairing would have the bleachers of the home team’s gymnasium filled.

Boyertown vs. Spring-Ford has traditionally drawn a spirited crowd for a competitive, hard-fought contest between the Pioneer Athletic Conference rivals. So it was a bit unusual Saturday morning to see the Boyertown gym devoid of anything more than the teams’ wrestlers, coaches and support personnel — a result of the ongoing restrictions imposed by the COVID-19 pandemic.

The duel did not lack the traditional intensity or level of participation, though. The Bears and Rams brought out full lineups for the Liberty Division tussle, a close one until Spring-Ford used a surge in the middle-upper weight classes to come away with a 40-20 victory.

A run of pins from 152 through 189 enabled Spring-Ford (2-0) to erase Boyertown’s five-point lead and secure the team victory with another pin and major decision over the final four weights. But the early action was very competitive: Decisions scored by margins of two to six points, evenly split between the opponents.

“It’s good to come on a Saturday morning to Boyertown and wrestle matches,” SF head coach Tim Seislove said. “For the kids, any time they get a chance to wrestle Boyertown, they want to do it.”

Boyertown’s “new” head coach — new in name only, with more than a decade of service in the program as an assistant — pronounced himself happy with his squad (1-1) being able to compete after pandemic-forced delays.

“Absolutely, 100 percent,” Tony Haley said. “Being back on the mats and wrestling Spring-Ford is great. They’re the best team in District 1 and probably one of the Top 10 teams in the state.”

The early momentum went back-and-forth, Spring-Ford opening with Dominic Ortlip’s 5-1 decision of Luke Heimbach at 120 and Gus Carfagno adding a 7-1 verdict over Hayden Stezenko at 132. The Bears responded with Julien Maldonado, two days removed from the 100th win of his scholastic career, topping Quinn Smith at 126 (4-2) and Dominic Sheridan prevailing over Ryan Lepore at 138 (6-3).

Needles’ fall started the pin run by Aaron Judge (160), Xavier Cushman (172) and Jack McGill (189), whose 24-second drop was the day’s fastest. McGill’s performance was notable in light of the revelation he moved up two weights, a potential difference of almost 30 pounds.

“We made it work out,” he said. “I made the weight in my class, then went out and wrestled the match.”

Anthony Bauer stemmed the Ram surge by shutting out Franny Undercuffler at 215, 3-0. But John Kaputa got the visitors the match clincher with his pin at 285: A 36-14 lead with the two light weights left to contest.

“Needles, McGill, Cushman and Judge got the job done,” Seislove noted. “Carfagno, at 132, had a nice win.

“It was just a team effort. Everyone did their jobs and took care of business.”

It was another split at the low end of the weight scale, Gavin Sheridan scoring a 54-second pin at 106 for Boyertown while Cole Smith closed things out for Spring-Ford with a 12-2 major decision.

“Sheridan is a solid kid, only a freshman,” Haley said.

Another point of satisfaction for Haley was seeing a full slate of bouts, at both the varsity and junior-varsity levels, take place.

NOTES >> McGill, whose plans to attend Columbia (N.Y.) University after graduation were announced at the beginning of December, said he actually made the decision during his junior year. “I wanted to get it out of the way,” McGill, who plans to study economics, said. “It (Columbia) gives me the opportunity to be my best.” … Seislove on the way his grapplers are responding to the requirement to wear face masks during bouts: “They’re used to it. They want to wrestle,” he said.