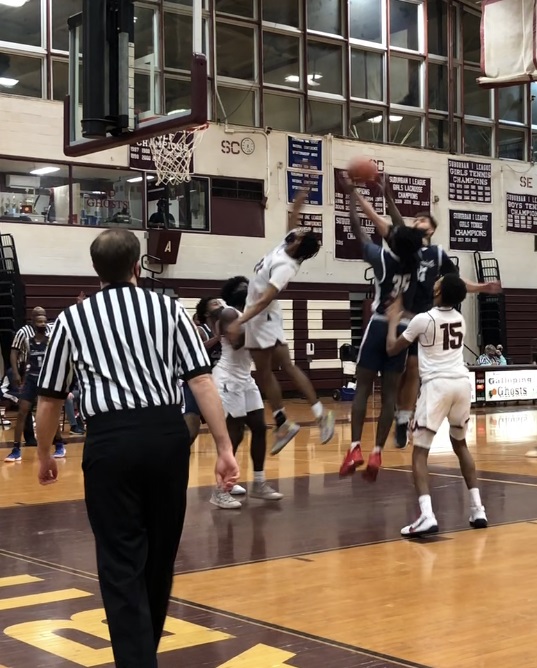 Plymouth Whitemarsh's Zuri Jerman (35) and Luke DiCianno (21) jump for a rebound against Abington during their game on Friday, Jan. 22, 2021. (Andrew Robinson/MediaNews Group)

ABINGTON >> In a flash, Plymouth Whitemarsh’s comfortable fourth quarter lead had been cut to single digits.

A year ago, it likely would have led to the ship capsizing and that entire lead slipping away into an eventual loss. But for the second time this week, the Colonials managed to plug the leak, didn’t fall apart and maintained their lead to the final horn of the game.

Behind a big first quarter run and plenty of timely defensive plays, the Colonials picked up a 62-50 win at Abington on Friday night to continue their unbeaten start this season.

“There’s teams that do everything right and then there are teams that know how to win,” PW coach Jim Donofrio said. “Our teams of the last two years did not know how to win, so to be 4-0 and you’re at Abington and at Upper Dublin, the kids know wherever we go, you have to play at a certain energy and if you don’t, you’re going to be in a war.”

The two programs, who have shared plenty of high-stakes games over the past half-decade, aren’t strangers to each other. This wasn’t a game for flashy gimmicks or a cadre of 15 different defensive looks but one that would get figured out in a span of 93 feet by whichever team had it most together.

BOYS BASKETBALL: @PWHSBasketball David Harris gets a steal then makes a great lead pass to @jaden_colzie who sticks the three Q4 at Abington pic.twitter.com/XCX2XwU2uk

For five minutes, it played out that way with each team trading scores up to a 9-9 tie with PW trying to pressure the Ghosts while Abington attempted to establish its physical play at its pace. From the 2:55 mark of the first quarter to the end of the frame, the visitors reeled off 14 straight points to take a 23-9 lead into the second.

“It was a lot of communication on our part,” PW forward Zuri Jerman said. “We had to be aware of where everyone was at and you do that by talking a lot and moving around. You just have to fight every possession, I’m not trying to give up on any play and you want to fight for your teammates as much as you can.”

Jerman, who had five points in the first quarter, along with senior Luke DiCianno played a key part in maintaining the big PW run with defense. The duo was very disruptive in the paint and around the rim, collecting a couple blocks, getting their hands in to dislodge the ball a few times and crowding any Abington players who got in the lane.

The Ghosts had five turnovers in the first quarter, which was a problem all game where they gave up the rock a total of 21 times. Abington coach Charles Grasty felt his players were actually getting too deep into the lane before picking up the ball and trying to make a decision, which put them in spots where they couldn’t make a clean pass out of it.

“When a team jumps on you like that, that’s what they want with their style, they keep coming at you and you can’t afford all those turnovers,” Grasty said. “The turnovers definitely killed us, you turn the ball over two or three times in a row and all of a sudden, you’re down nine.”

BOYS BASKETBALL: @PWHSBasketball @zende_hubbard with a burst down the lane for a layup Q3 against Abington pic.twitter.com/mhnAqLEaqY

PW only scored eight points in the second, but the Colonials kept Abington from getting much going and took a 31-18 lead at the half. The Colonials trio of guard in Zende Hubbard, Jaden Cozie and Qudire Bennett had turned in a strong opening quarter and came back strong in the third as PW built its lead up to 20 points with a 39-19 advantage.

Jerman found himself in foul trouble midway through the third, but the senior felt his teammates did a good job of showing the resilience he feels has been the Colonials’ calling card this season. A quick 6-0 burst gave PW its largest lead at 47-25 with 1:46 to play in the third quarter.

“We’ve been able to pick up a lot even over the past few games and we’ve all learned a lot from last season,” Jerman said. “It’s all learning the lessons from last year and trying to adapt a new mindset. We’re not accepting giving up wins because we’ve worked so hard to get in that position.”

Abington closed the quarter with a 6-0 answer but fell behind 52-35 with 4:53 to go on a trey by Colzie, who led PW with 16 points. Then, the turnover trouble that had plagued Abington caught on with the Colonials and spurred on by senior Rob Bell, the Ghosts ripped off 10 points in a 40-second span.

Bell, who led all scorers with 23, came up with three steals and seven points during Abington’s 10-0 surge with Karim Boyd converting an and-one at the back end to close within 52-45 of PW.

BOYS BASKETBALL: @goghosts @RobBell_ swoops in for a layup Q2 against PW
Bell led all scorers with 23 pic.twitter.com/jBjzoUVLOI

On Tuesday, the Colonials had to survive a late run by Upper Dublin that saw the Cardinals get within a layup of tying the game. Friday, facing another high-wire act, the Colonials didn’t have to do everything right but they had to do what we needed to win the game.

“That’s a loss last year, the last two years that’s been a loss either out of youth or some sort of mellow-ness,” Donofrio said. “No team, especially when you’re on the road, is going away. Really, you can assume no team is going away ever until it’s over so we’re trying to get these guys into the mindset of some our teams of the past that just loved playing the game past that 32-minute mark.

“Kids will make shots that normally they don’t make, but if you want to compete and come back, suddenly they’re making that shot. The goal is ‘can you play 32 minutes where you don’t give them a lot of hope?’ and I would say we did 28 minutes.”

Friday was just Abington’s second game of the season and the Ghosts had gone an entire week between contests. Grasty used 12 different players and he said that he’s still figuring out who can fill which roles on the squad as they start to pick up more game experience.

The Abington coach liked the energy his guys found in the second half and said their focus now is expanding it to an entire game start-to-finish.

“We’ll get this thing together soon,” Grasty said. “This game is going to help us understand that energy we had in the second half, we’ll need the entire game. Me as the coach, I have to realize these guys will go hard for two or three minutes so I’ll have to get them out and trust our bench and we all have to play harder.”

BOYS BASKETBALL: @PWHSBasketball @zende_hubbard drives then makes a nice dish to @ZuriZuriamir for a layup Q1 at Abington
The Colonials closed the quarter on a 14-0 run pic.twitter.com/eTXOx6mqgI

After the Ghosts closed within seven, the Colonials defense returned and the guards helped close the game out by forcing a handful of key turnovers. Hubbard and David Harris each had two steals in the final frame as PW disrupted Abington’s comeback bid.

PW will host Hatboro-Horsham on Saturday where the Colonials will honor their seniors.

“I tell them to just believe in themselves, they work hard so they should believe in themselves on every play just like we do,” Jerman said. “They love the game as much as we do. We can’t look back on any games now, it’s back to the drawing board. We can bring the effort, so we just have to keep executing.”