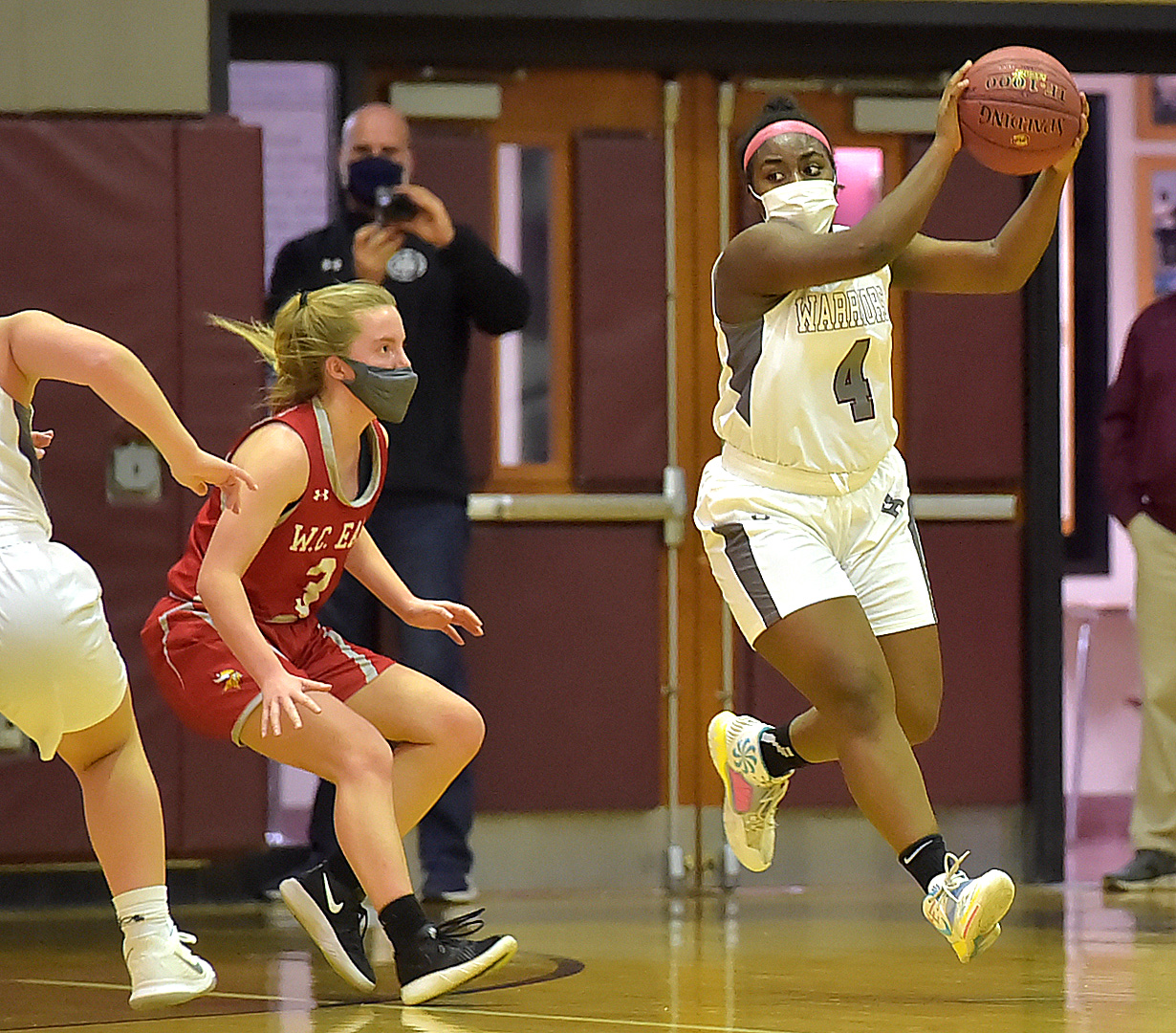 WEST CHESTER >> West Chester Henderson teamed its trademark tough defense with an explosive first half from freshman guard Whitney Evans for a 50-38 victory Friday evening in the season opener for both girls’ basketball squads.

Henderson head coach Greta Neff said, “I’ve been harping [in pre-season] on playing defense aggressively, making [the opponent] make a decision on offense, and tonight we did that.” The Warriors’ defense was red-hot in the second quarter, triggering a 19-3 run which gave the hosts a 36-19 halftime lead.

“We had a great second quarter,” said Neff. “Our players really worked hard tonight, had that ‘next play’ mentality.”

In the first quarter, Evans, the younger sister of former Henderson star hoopster Shante Evans, tallied a trio of treys to give the hosts a 14-9 first-quarter lead.

Then the Warriors’ defense turned it up a notch. In the last five minutes of the second quarter, Henderson forced several turnovers and held the Vikings to one field goal during its 19-3 run.

Just before Henderson’s red-hot run, East had cut the Warriors’ lead to 17-16 on a three-point play by senior standout Lauren Klieber.

Then the hosts took charge. Warrior freshman Jackie Shea started the run with a field goal underneath the basket. Following a couple of missed East shots, Evans was fouled and made both free throws. An East turnover was followed by a trey from Henderson senior guard Molly Manion to give the hosts a 24-16 lead.

After a Klieber free throw for East, the Warriors built their lead to 31-17, first with a trey from the right corner by senior guard Brittney Forcine, then a Manion basket underneath following a missed East shot, then two free throws by Evans following a Viking turnover.

East senior Katie Douglass came up with a steal and a layup to cut the hosts’ lead to 31-19, then the Warriors scored the final five points of the second quarter, capped by a trey from Evans from the left side. By halftime, the Warriors had converted six treys.

Evans scored 17 points in the first half, including four treys and a 5-for-6 performance from the free throw line. The Warrior freshman kept up her scoring in the second half, finishing with 24 points.

“Whitney plays aggressively, is offensive-minded and has lots of speed,” said Neff. Whitney’s older sister Shante scored 2,158 points during a sparkling four-year career at West Chester Henderson that culminated in 2009, when she was Daily Local News Player of the Year, Ches-Mont Player of the Year and a first team all-state selection.

In the second half Friday evening, East outscored Henderson 19-14 as the Vikings’ senior duo of Klieber and forward Megan Merten combined for 17 points. Klieber, a fourth-year starter who averaged 17.0 points and 7.7 rebounds per game as a junior, and Merten each finished with 15 points.

Meanwhile, Henderson maintained its double-digit lead in the second half, getting scoring from eight different players Friday.

“When East locked down on Whitney and Molly in the second half, [junior guard] Grace DePrisco handled the ball well for us, stayed calm and composed,” said Neff. “Both Sheas [Jackie and senior forward Ellie] had a nice night. Really, our whole squad played well tonight.”

Listrani, whose East squad returns five starters from a squad that went 18-10 last winter and earned the program’s first state tournament berth in 18 years, said, “I’m 100 percent confident we’ll bounce back. Our team has lots of heart and experience, and we’ve got to keep working. Each day that we’re out here [on the basketball court] is a blessing.”