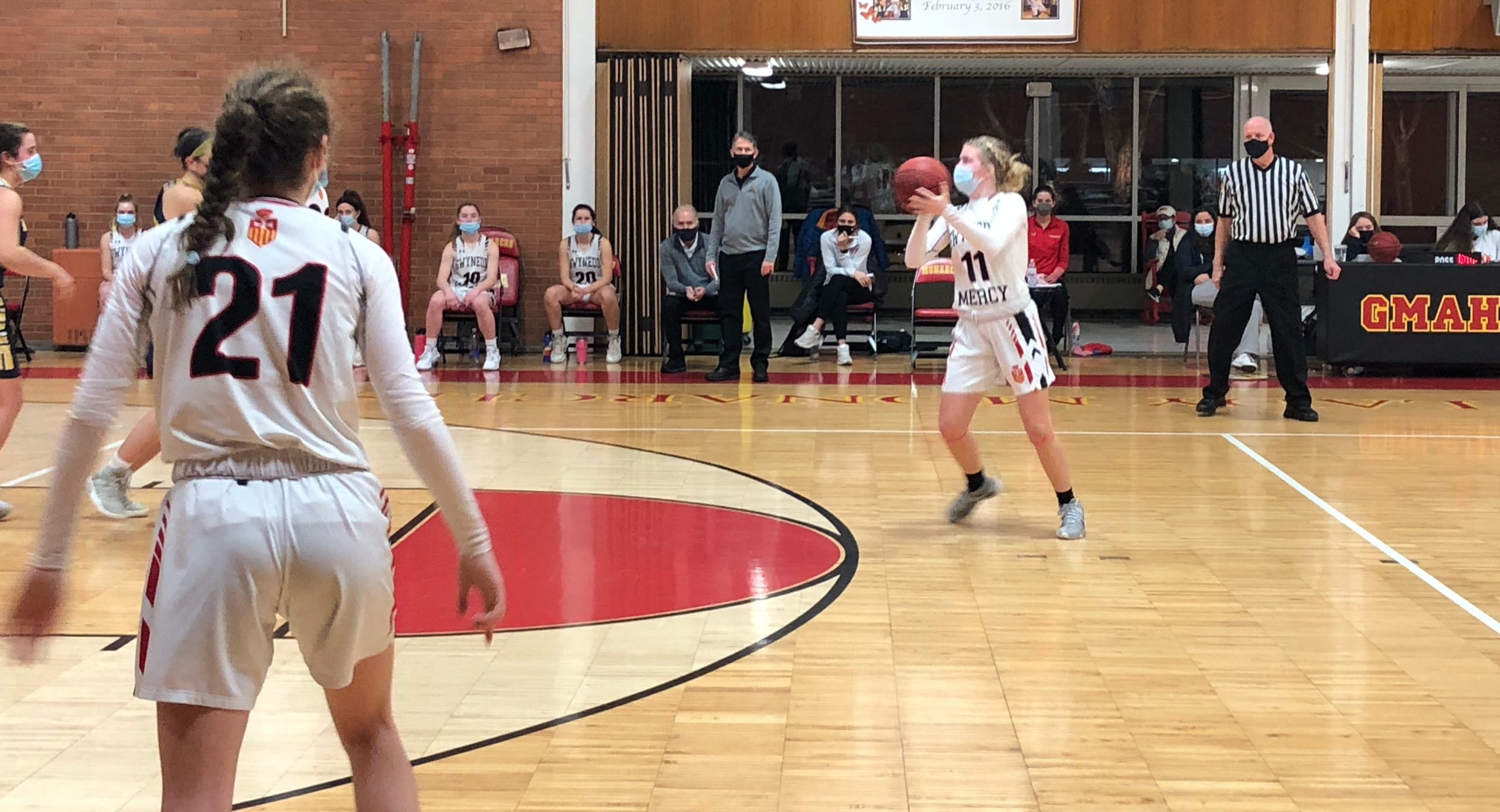 LOWER GWYNEDD >> It took just four passes and two dribbles to get Sofia Coleman a wide-open shot beyond the arc early in the third quarter Thursday evening.

It wasn’t a flash in the pan sequence either, instead it’s been the standard for Gwynedd Mercy Academy’s girls basketball team this season. The Monarchs have been crisply efficient on offense as they near the midpoint of their AACA schedule, owed up to plenty of willing passes and a lot of continuity.

GMA’s offense continued humming along on Thursday as the Monarchs assisted 14 of their 22 makes while improving to 5-0 after a 54-24 win over visiting Nazareth Academy.

“Our ball-movement has really been helping us,” Coleman said. “Most of our team can shoot outside, I think we’re a stronger shooting team this year and we can all pass well. If one of us is having an off day, we know someone else can have a good day and we all trust each other and are comfortable looking for each other.”

With three sets of sisters in the Griffins, the Colemans and the Newells on the roster, GMA has built-in chemistry but the Monarchs have taken it a step further applying it on the court.

“We have a lot of chemistry,” Hannah Griffin said. “Aside from those of us that are sisters, we’ve all known each other for a while and we have a strong understanding how we play. We stick up for each other, it’s not like we’re relying on one person because we have a good variety of players.”

Sofia Coleman led all scorers with 16 points on an extremely efficient 6-of-7 shooting and after her back-to-back threes in the first quarter put the Monarchs up 6-2, Gwynedd Mercy led the rest of the way. GMA fell behind 2-0, then ripped off the next 15 points with three of the six baskets assisted and the other three coming off defense-forced turnovers.

Like all other teams this season, the Monarchs had to deal with an offseason that saw two prolonged shutdowns. Griffin said the team bridged the game with Zoom calls and workouts but also cited their continuity from last season as a key factor in their strong offensive start.

“A lot of it comes from working during the offseason with our AAU teams and even that shutdown during Christmas, we were on calls as a team working out,” Griffin said. “We were getting our offense down while maybe some teams were sitting, we wanted to be working out.”

The Colemans and Kaylie Griffin play for the Comets AAU organization while Hannah Griffin competes with the Philadelphia Belles, two of the top local programs. Sofia Coleman said some of the Comets’ principles carry over to their high school team, especially the focus on ball movement, floor spacing and versatility.

“It’s just easy for us to play and trust each other,” Coleman said.

At the end of the first quarter on Thursday, Gwynedd Mercy had a 15-6 lead thanks to 6-of-12 shooting. By the end of the game, the Monarchs had hit on 22 of their 43 attempts, a solid 51.1 percent clip to go with their significant assist percentage.

Even with Nazareth Academy playing a zone, the Monarchs still found plenty of open shooters and connected on nine 3-pointers as a team. Just as important as their passing, with Hannah Griffin’s five assists leading the side, was the off-ball movement including screens, cuts and players re-locating with each pass.

“Offensively, they picked up a lot of things quickly and I think having a big nucleus of our team returning made a big difference,” Gwynedd Mercy coach Tom Lonergan said. “Some teams that are struggling, the common theme is they haven’t had much time together. Where in the same situation that we haven’t had that much time together, but we’re doing things they’re used to doing and have been doing over the years.” Despite the 5-0 start that has included wins over the AACA’s other top teams in St. Basil, Mount Saint Joseph and Villa Maria Academy, the Monarchs aren’t content to rest on their record. They still have one game with Villa Joseph Marie left to finish the first half of their season and expect their league opponents to have some adjustments ready for them the second time around.

On the defensive end, Gwynedd Mercy didn’t give up a made field goal in the entire second half and the Monarchs created 12 steals, led by four from Kaylie Griffin. While the Monarchs are usually a sound defensive team, they are once again on the smaller side so they’ll have to play their strengths on defense much like they have on offense.

“We definitely want to start fouling less, it’s something we’ve been struggling with,” Coleman said. “We’re lacking bigs, so it’s hard to rebound every miss when you’re tallest players are 5-(foot)-9 but that’s also something we can keep working at.”

Gwynedd Mercy opened the third quarter on a 9-2 run capped by Sofia Coleman’s three from the top of the arc that gave the Monarchs a 36-15 lead. The fourth quarter afforded a chance for some of the team’s reserves to get in, with Ellie Verill grabbing two baskets and an assist in that span.

With just 10 players on the varsity roster and attendance limited in some of the AACA’s smaller venues, the Monarchs are relying on their bench to bring some energy to otherwise quiet gyms. Lonergan said this team is the one of the closest-knit he’s coached and the players arrive at practice each day eager to improve on each prior game.

The Monarchs’ strong start is due in large part to their play as a group and it’s not a start they’re all that surprised about.

“When we came back to practice, we expected to have our skill there and be in shape,” Griffin said. “We weren’t coming back super-sloppy. Our shots are falling right now, which is always helpful, but we’re going to keep moving the ball and we’re very competitive, so we know you always have to go as hard as you can.”