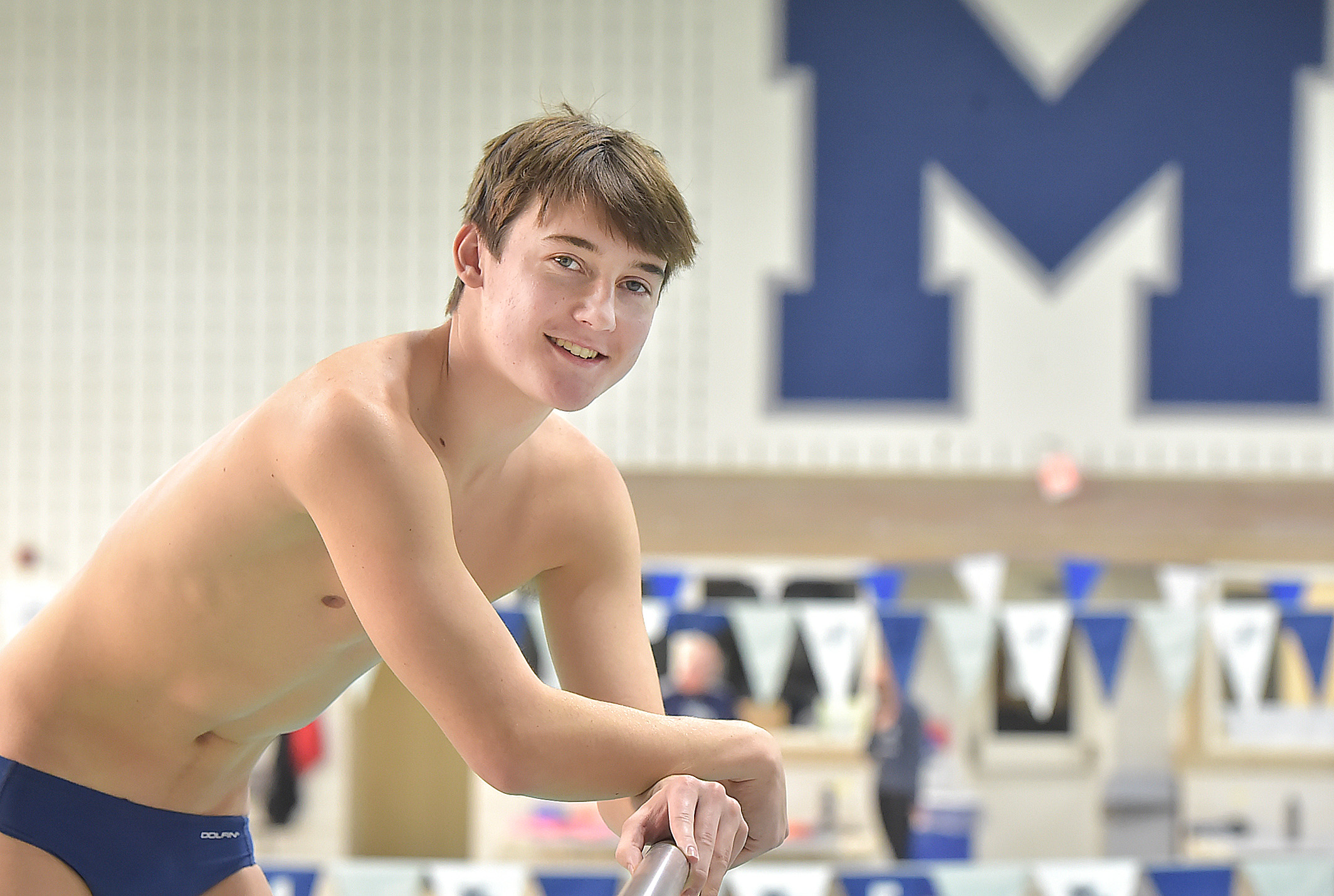 The Malvern Prep swimming team is preparing to dive into the pool for the winter 2021 season, led by All-American junior diver Nick Harris, who was the Inter-Ac, National Catholic and Easterns 1-meter diving champion in 2020.

Harris won by a comfortable margin at Easterns, compiling 567.25 points, comfortably ahead of second-place finisher Rowland Lawver of Hun School (442.45). His favorite memory of the 2019-20 Malvern Prep swimming season was at National Catholics. “I really enjoy that meet because the diving is at the same place as the swimming, and I’m with my teammates,” said Harris. “I also faced good competition there.”

Like his fellow Friar teammates, Harris had to deal with the unique offseason training challenges posed by the COVID-19 pandemic.

“Last summer, my USA team trained at a private outdoor pool on 1m and tower, and I was able to dive about 3-4 hours a week,” said Harris. “Normally I would be diving a lot more because that is when Nationals would be happening, but those were all canceled. I continued to dive outside up through November when the weather cooperated.”

Harris is already being heavily recruited by top Division 1 programs, including University of Texas, University of California and Ohio State.

Another key cog in the Friars’ lineup that winter is Malvern senior co-captain Ryan Durkan, who has committed to the United States Military Academy at West Point, was All American last year in the 100 yard breast and set the school record in that event. Durkan was also a member of Malvern Prep’s school record-setting and All American 200 yard medley relay.

“Ryan has improved significantly in the 200 IM and 100 fly events and could be a multiple event All American again in 2021,” said Malvern Prep head coach Jay Schiller.

Friar junior Kevin Cary is considered one of the top freestyle swimmers in Pennsylvania, and will compete in any freestyle event from the 50 free to the 500 free. He also will be the anchor of the Malvern Prep relays. Cary is already receiving interest from Division I programs across the United States. Malvern junior Alex Hamill, whom Schiller said has improved significantly over the summer and fall, swam the backstroke leg of Malvern Prep’s school record-setting and All American 200 yard medley relay last year, and should be one of the top backstroke and IM swimmers in the area this winter.

Sophomore Ben Kutufaris swam the anchor free leg of Malvern’s All American and school record-setting 200 yard medley relay and should be a top sprinter for the Friars. Senior co-captain Michael McMahon will add depth for the Friars in the backstroke, breast and IM events.

Here’s a look at the other local high school boys’ swimming teams:

Coatesville’s top returning swimmer this winter is senior Jacob Vannoy, who has qualified for districts in individual events the past two years. His best events are butterfly, backstroke and the Individual Medley.

Downingtown East is led by senior DJ Fechtman, the 2020 Daily Local News Boys Swimmer of the Year. The University of Delaware commit is a multiple PIAA Class AAA participant and state finalist for three consecutive years, with Top 8 state finishes in 2020 in the 100 back (50.25), 100 fly (50.33), and 200 medley relay. Fechtman helped D-East win the 200 medley relay district title in 2020, and he holds multiple team records at Downingtown East. Seniors Aiden Carroll, Will Thompson and Owen Wright and sophomore diver Mitchell Goldman also are important parts of the East team.

Downingtown West has a promising group of upperclassmen that include the duo of junior Brandon Ye and senior Steven West, who qualified for districts last year, and Tanner Peck, Asa Ernest, Tatum Grogan and Dhruv Pant.

“Our team has depth and we look forward to seeing how we match up with other teams in the Ches-Mont,” said D-West coach Eric Snook.

Kennett’s leading returning swimmer is junior Liam Simmons, who finished seventh in the 100 back (52.38) and 11th in the 50 free at the PIAA District 1 3A championships last winter.

“Liam is a powerhouse backstroker,” said Blue Demon coach Cindy Millison. “His butterfly and freestyle are also very strong. He has been working successfully to improve his breaststroke. Once again, versatility makes him a team hero.”

“Alex is a contender in any event, with his district qualifying times in all events last winter,” said Oxford swim head coach Chrissy Reinard.

“Ryan Topmiller, a junior, is always a top finisher in his events, and we have a few incoming freshmen who are hoping to put up some fast and competitive times, such as Chase Bearly, Noah Topmiller, and Paul Kellerman.”

West Chester East features a couple of seniors who were district qualifiers last winter – fourth-year varsity swimmers Jon Sherlock and Steven Grunza. Sherlock is a two-time district qualifier in the 100 breaststroke. West Chester East boys’ coach David McCormick said, “Jon’s experience and leadership will be invaluable to a young team. Steven is looking to continue improving in the sprint freestyle events and will be a big part of our relay teams.”

“Dylan is a very cerebral swimmer,” said Henderson head coach Jeff Bott. “He is very calculated in how he trains and this leads to him swimming smart races. He is consistently improving in both technique and strength and as a result, he is developing the skill to swim multiple distances and strokes very well. He is a great all-around swimmer.”

West Chester Rustin will be led by a trio of District 1 qualifiers – senior Ben Worsnup, senior Ben Kiddie and junior Adam Khatib. Rustin coach Mike Monaghan said, “We hope to build upon our success in individual events and relays at districts.”