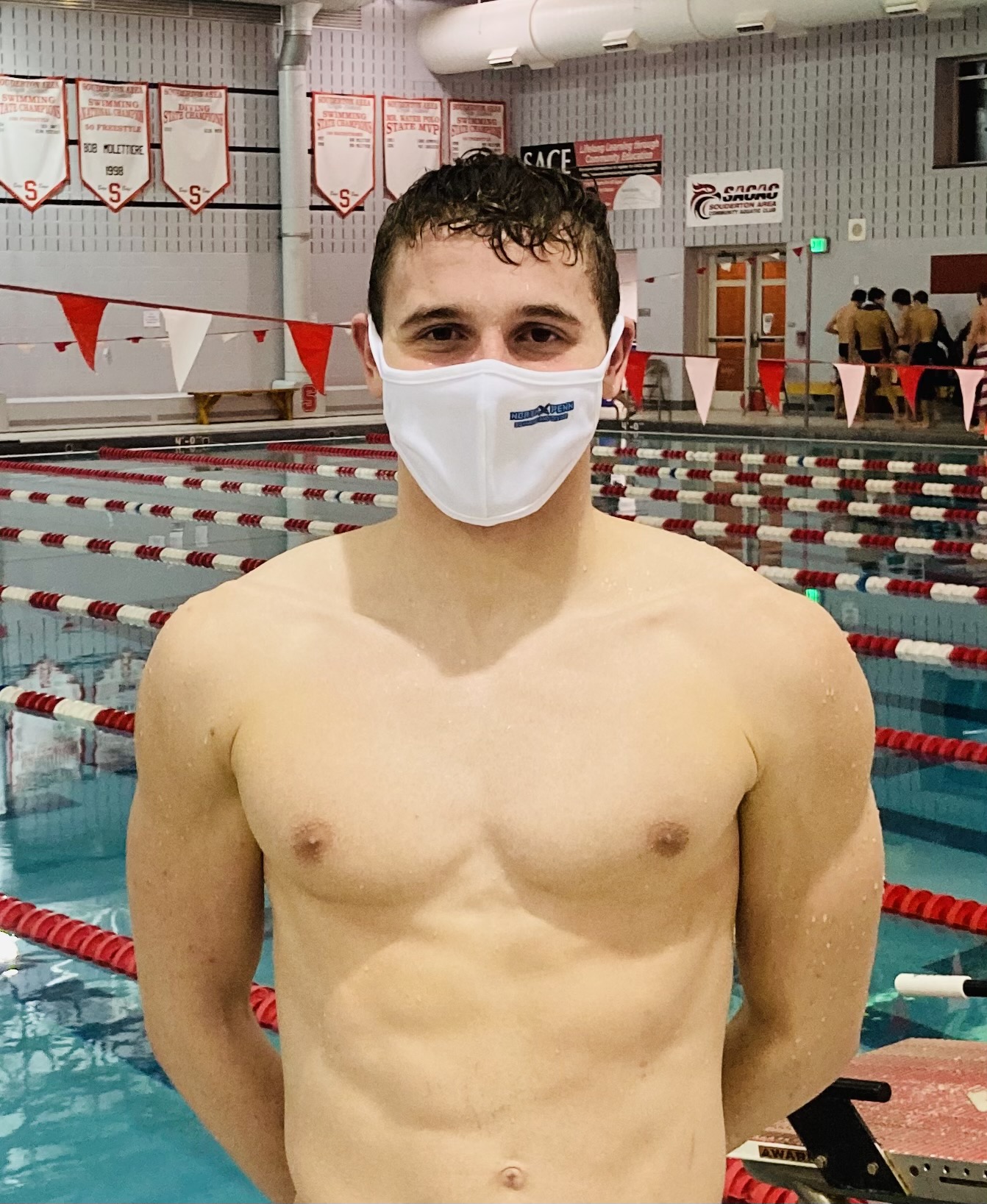 FRANCONIA >> Never before had the North Penn boys swim team faced such adversity before the season even started.
Having to postpone their first two meets due to a positive COVID-19 test, the Knights finally got to compete on Thursday, and it was a big one, against rival Souderton Area.
The Knights took the shutdown in stride.
“I tried to find places to swim,” senior captain Nick Clark said. “I swam at the YMCA. I swam outside. Honestly, that was cool. It was extremely cold but we got to swim in the cold, swam in the rain, and it was like a hot tub. It’s something to experience.”
The Knights finally got to come inside, swimming and diving to a 94-84 victory over Big Red, with the North Penn girls 98-88 winners over Souderton in the first half of the doubleheader.
“I would call it amazing given the circumstances,” Clark said of his team’s performance. “Given that we’ve had a week and a half of training, I think we swam really well.”
Clark won the 200-yard IM and also led off the first-place 200 free relay. He also swam the fastest 100 breast time and anchored the fastest 400 free relay team (NP swam the final three events as exhibitions). The North Penn boys won the first three events and six of the first nine to build a commanding lead.
“I felt pretty good today. I didn’t feel terribly off,” Clark said.
With each meet held separately due to social distancing guidelines, the events come at a rapid-fire pace. Clark did the 200 free relay, the breast and the 400 free relay in a tight window.
“That’s definitely the worst part about this,” Clark said, smiling, speaking of the format. “I warmed down from my 50, got back on the blocks for the 100 breast, got out from that and had to line up again for the 400. It was definitely a new experience. But I think that we dealt with it pretty well.”
It was a long time coming for the Knights.
“Every time we got shut down, you could tell the disappointment from all the guys on our team,” Clark said. “We’re all super excited and I think this was a very good foot to lead off on.”
North Penn began the meet – and the season – with a foursome of Matt Harkrader, Aidan Faikish, Kyle Stressman and Ryan Faikish going 1:42.52 to win the 200 medley relay.
“Beyond thrilled to be back in action with the kids,” Knights coach Jeff Faikish said. “It was a long layoff, makes you appreciate the time you really have. In years past, you sit there and you think about all the long hours and how hard it is. But I’ll go back to that in a heartbeat.”
Said Faikish of Clark’s performance: “He’s a great kid, excellent leader. It’s his turn to be the senior and be the team leader.”
Earlier in the evening, the North Penn girls got after it, raising their record to 3-0 in the Suburban One League Colonial Conference.
“Souderton’s got a really strong crew,” Faikish said. “We were down 16 after the 50 free and our girls fought tooth and nail to get back into it.”
Diving was key for the NP girls, as Madeline Zartman and Keira Allison went one and two. Charlotte Thamm powered to a win in the 100 fly and she also swam on the winning 200 free and 400 free relays.
“We love swimming against North Penn because we love to measure ourselves against the best,” Big Red coach Lou Williams said.
Robbie Ferlick continued his charge for Big Red, winning the 50 free and 100 free. Jess Burns won the 50 free and 100 free and also swam on the winning medley relay for the Souderton girls.
“I was impressed with the way our girls swam. We had some very nice races. The boys, similarly, but (NP) is just so deep,” Williams said. “But overall, I’m really happy about the way it went.
“We’re trying to make sure we’re keeping them moving forward and we saw some best times and some good swims so I think we’re on the right track.”