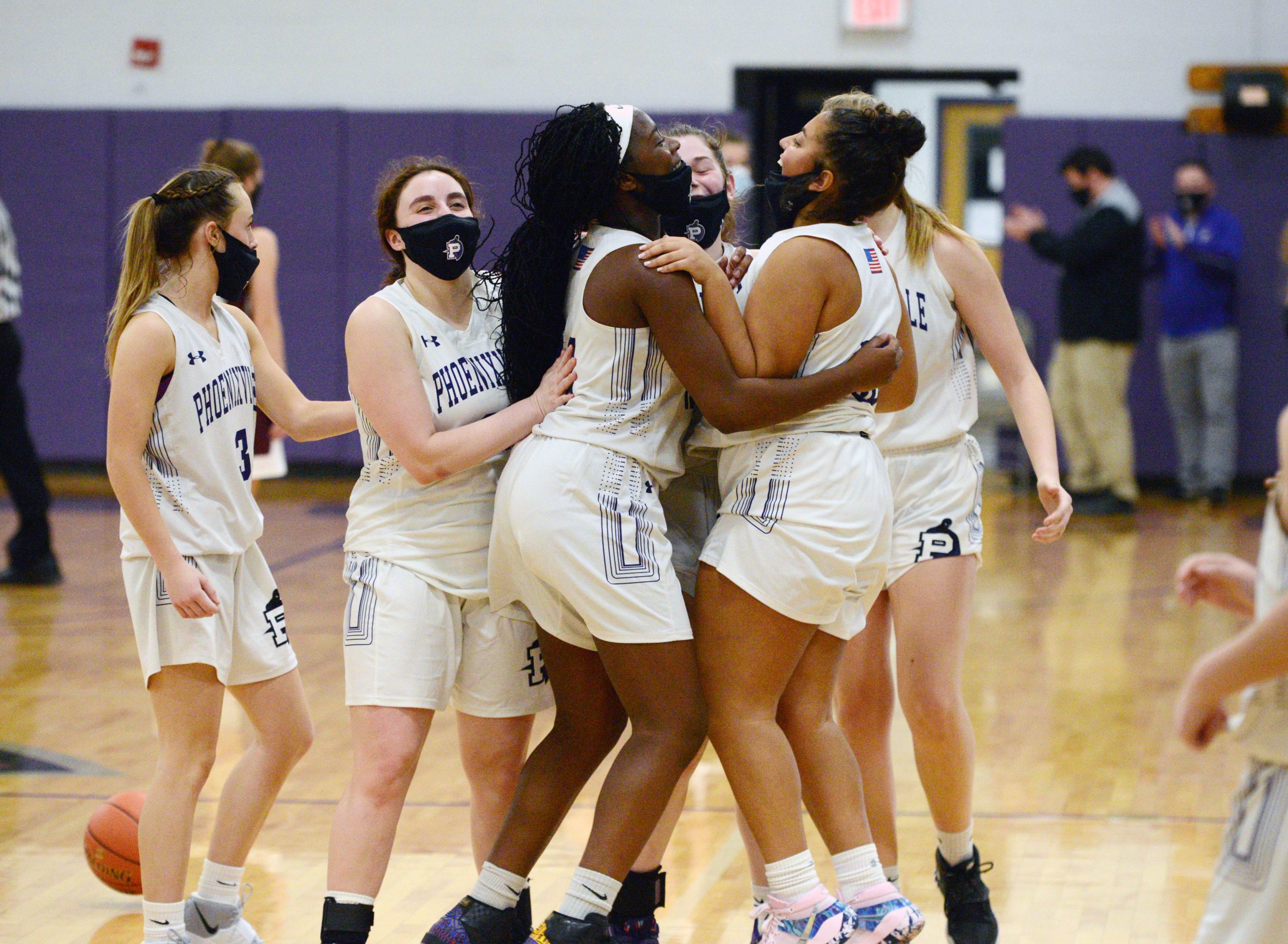 The senior duo — Aubrie Breisblatt and Nailah Green — made sure the celebration after the contest was just as special.

Breisblatt and Green combined for 17 of the team’s 19 second-half points as Phoenixville walked away with a 43-37 Frontier Division win over Pottsgrove. The victory broke a four-game losing streak against the Falcons that dated back to Jan. 30, 2018 during Green and Breisblatt’s freshman season.

Breisblatt led the Phantoms with 18 points, Green added 15 and junior Dylan McAleer scored 10 to account for all of Phoenixville’s scoring. Sydney Mowery led Pottsgrove with 15, while senior Riley Simon chipped in 11.

“It’s a big deal,” Breisblatt said. “They’ve overpowered us the past few years. They are strong. To get this win is big for us.”

“There’s two of us (seniors),” she added. “There’s not many leaders on the court. We have to bring it every game.” The Phantoms’ senior duo scored the first two buckets of the fourth quarter and after two minutes of scoreless basketball, McAleer scored off a feed from Jaime Michaud to put Phoenixville ahead 39-30 with 3:50 to go.

Pottsgrove’s pressure kept things uneasy for Phoenixville — a steal and fastbreak score from Riley Simon made it a 39-34 contest with 1:53 left — but the Phantoms’ seniors showed poise and grit down the stretch.

After McAleer found Green wide open down low for an easy bucket that gave Phoenixville a 41-34 advantage with 1:15 left, a couple of free throws and offensive rebounds by Green and Breisblatt wrapped up the win.

“Pottsgrove is our rival,” said Green, who also significantly contributed with her defense and rebounding. “We go neck-and-neck because we both are so high intensity. The fact that we beat them in intensity and beat them off the ball, that was really good.”

“We came into this game thinking, ‘You know what, we’re going to give our all,’ but we did that times a million,” she added.

Phantoms ahead 41-34 with 1:15 left after Dylan McAleer finds Nailah Green underneath. pic.twitter.com/U6tUOJa5Mz

After tying the game 15-15 early in the second quarter Tuesday night, Pottsgrove trailed the remainder of the contest, though they never let the score slip out of reach.

Phoenixville went up double digits early in the third quarter before Pottsgrove ended the period on a 10-2 run to cut the deficit to 33-30 heading to the fourth. The Phantoms held the Falcons to just four points in fourth quarter before a last-second three by Jaimi Makins with the game already out of reach.

Though their defensive pressure discomforted Phoenixville, the Falcons’ offense was inconsistent throughout, going through a number of long stretches without scoring. They didn’t help themselves with a 6-for-14 showing from the free throw line. The Phantoms went 4-for-16.

“I thought we played hard,” Pottsgrove coach Mike Brendlinger said. “I thought we had good shots throughout the game, but we didn’t finish. Our foul shooting was spotty. We had some opportunities we didn’t take advantage of.

“Phoenixville played very well, they played very hard. They hit the offensive glass and they hurt us off that. There were a lot of second and third opportunities, and Breisblatt played really well.” Phoenixville second-year coach Brian Grashof saw his squad let a few close contests slip away last season, including a 38-35 loss to Pope John Paul II in their regular season finale, which kept the Phantoms out of the PAC and District 1 playoffs.

The Phantoms dropped another tight contest Tuesday night against Owen J. Roberts, in which they led heading into the fourth quarter.

Grashof hopes Wednesday’s victory was a sign of more positive results to come in these marquee matchups — a result of experience gained from past defeats in similar situations.

“Winning that tonight was fantastic,” Grashof said. “It meant a lot to us just knowing the kind of program (Pottsgrove) is is huge. It’s very cool.”

“I think it’s them just wanting it this year and figuring out how to win that big game,” he added.

The two division losses coupled with Tuesday’s crossover defeat to PAC power Spring-Ford has Pottsgrove in unfamiliar territory with an 0-3 start. Brendlinger’s squad will face Upper Perk on Friday night, hoping to get its first victory of 2021 and turn the tide of its season.

Phoenixville ahead 39-34 with 1:53 left after Riley Simon steal and score. pic.twitter.com/iCsQEn7okB

The Falcons, who will face both Phoenixville and PJP again later in the season, have the personnel to do it with 10 seniors, including four starters back from last year’s division champion squad in Mowery, Simon, Sierra Potts and Rachel Ludwig.

“We have no choice but to keep looking forward,” Brendlinger said. “We can’t change what’s happened. Friday night we start again.”

“They’re good kids. They work hard,” he added. “I’m sure this is tearing them up as much as me, so I think they’ll be alright. We’ll come out Friday and hopefully get things started. We keep saying we gotta start a winning streak some time, so maybe Friday night.”

Phoenixville faces PJP on Friday night with a chance to become the early frontrunner in the Frontier Division. A season ago, the Golden Panthers won two games against the Phantoms decided on the final possession.

The Phantoms’ losing streak against PJP goes back even further than the previous drought against Pottsgrove as Phoenixville hasn’t beaten the Golden Panthers since Dec. 20, 2016 — when Breisblatt and Green were in eighth grade.

As the Phantoms look to break the seven-game losing skid to PJP Friday and win a couple of more ‘big’ games this season, their senior duo will continue to lead the way.

“(We have to) keep the same energy, keep playing as a team and bring everybody up,” Breisblatt said. “We’re going to come in as underdogs.”