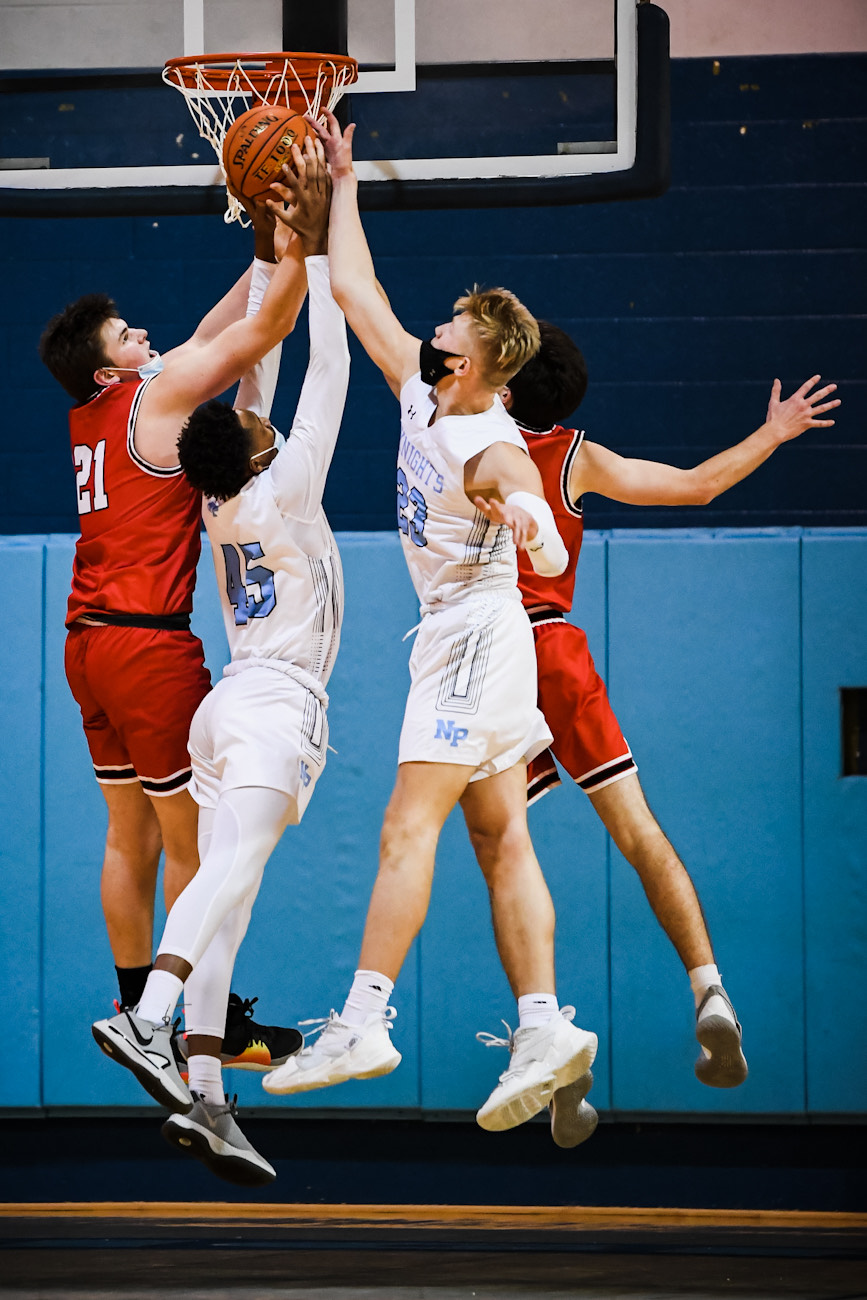 Souderton’s Aleks Smith (21) reaches up for a rebound with North Penn’s Tehran Wright (45) and Josh Jones (23) battling for position during their game on Tuesday, Jan. 19, 2021. (James Beaver/For MediaNews Group)

TOWAMENCIN >> Each time the ball came away from the backboard, a player in a white and blue uniform rose to push it back toward the rim.

Once, twice, three times, the ball would not go down but North Penn wasn’t giving up on it either. Finally, on the fourth try, Josh Jones converted the putback and gave the Knights a small battle won in the fourth on their way to winning the overall war on the glass.

Coupled with a resurgent defensive effort, North Penn rebounded from a pair of losses to topple visiting Souderton 56-44 in an SOL Colonial contest Tuesday night.

“We got key stops down the stretch, especially in the fourth quarter,” Jones said. “We’ve been giving up more points than we’d like in our first three games, so we made fixing  that our focus and that’s what we wanted to do tonight.”

Things hadn’t gone well for the Knights their prior two times out, getting beat on the boards in an overtime loss to Pennridge last Friday before their defense couldn’t seem to get its footing in a loss to Plymouth Whitemarsh on Saturday. With an Indians team eager to get its first win coming to their gym Tuesday, the Knights had to buckle down and get back on track. After a pretty even first half, North Penn (2-2, 2-1 division) began to grind its way to a win in the second half, punishing Souderton with 11 offensive rebounds after halftime and throwing a variety of defensive looks at the Indians to keep their offense unsettled. Coupled with Jones establishing himself down low and a couple key makes from the perimeter, the Knights started to pull ahead.

“We switched up our defenses to try and keep the ball out of the post and not let them get as many drives,” Knights guard Joe Larkins said. “The help defense has to be big. Guys are going to blow by you at times, but when our team is playing together, everyone’s on a string and ready to help.”

While his team still fell short of the desired outcome, Souderton coach Tim Brown saw strides from his group. At times flummoxed in the first half by North Penn’s array of zone looks, the Indians were able to figure some things out in the second half.

However, Souderton (0-3, 0-3) left the gym still looking for that first complete game performance.

“They dominated the offensive glass in the second half,” Brown said. “We did a good job boxing out in the first half, but they just out-muscled us when it got to winning time. We can’t have that, we have to match that intensity and match that physicality and these guys are still learning that.”

BOYS BASKETBALL: @npknightsbball @RZeltt cleans up the miss Q4 against Souderton
NP had seven offensive rebounds in the quarter pic.twitter.com/dtw3qVzGlv

Souderton led 22-21 at the break thanks to a well-executed play that led to a corner three from James Blair just before the second quarter ended. Sophomore Shaun Purvy had a good game, scoring 13 points to pace his team while Evan Kutzler netted eight.

“The fact they stayed with it, kept taking care of the ball and took shots we can make, that’s what I’m proud of,” Brown said. “The game is starting to slow down for them, they’re seeing what’s happening, thinking about what’s happening then starting to play basketball.”

A critical cold stretch offensively for Souderton to start the third quarter didn’t make the task any easier. The Indians only scored three points, all at the foul line, in the first six minutes of the second half before Kutzler finally bagged a field goal to break the spell.

Despite by six going into the fourth, Souderton had no answer for North Penn on the glass as the Knights collected seven offensive rebounds in the final period.

“That’s just a mentality of wanting it more than them,” Jones said. “In the game against Pennridge, we weren’t attacking the glass like they were and gave up a lot of offensive rebounds so we wanted to come out tonight and make a statement with that. I feel like we did because we scored a lot of second-chance points.” Souderton’s Shaun Purvy (2) drives the lane for a basket against North Penn during their game on Tuesday, Jan. 19, 2021. (James Beaver/For MediaNews Group)

Jones, who led all scorers with 19 points, had 15 after halftime as the Knights made a focused effort to use their size inside. The senior said the offense got too bogged down at times in the first half and settled for some bad shots, but pumping the ball into the post helped set up those offensive rebound chances.

It also got the Knights into the bonus early and set up a couple key shots outside. After Jones put the Knights up 24-23 with 4:31 left in the third, the Knights forced a turnover and on their next trip down, swung the ball around with an extra pass by Jones finding Larkins for a three and an advantage they would never give back.

“I’m just trying to make a shot for my team,” Larkins, who scored 13, said. “I’m playing off these other guys and if their energy is high, then my energy is high.”

It was a group effort on the glass, but Jones specifically pointed to the play of Ryan Zeltt, who brought a lot of energy on both ends that included nine points, three assists and four of his nine rebounds coming on the offensive end. Billy Coley and Milind Pulugura each had three offensive boards, Larkins had two and Jones the one on his fourth quarter, fourth-chance hoop that made it 46-37 with 4:28 to go.

The Knights are right in the thick of the SOL Colonial mix and have an important game with Central Bucks South on Friday.

“It was a major boost and now we’re ready for the next one,” Larkins said. “We’re ready to jump into practice and get better.”