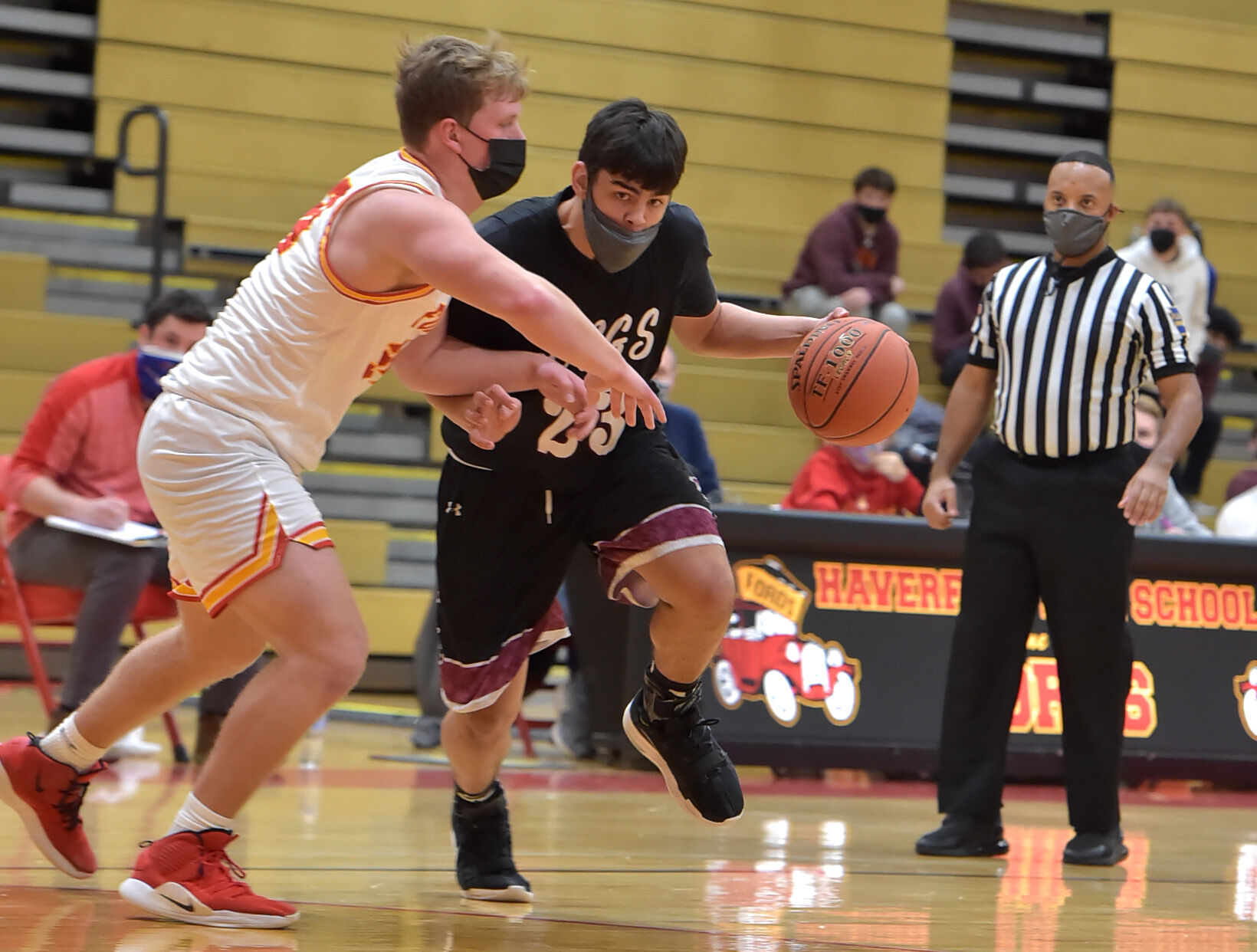 Garnet Valley's Justin Langan, right, drives past Haverford's Will Higson in the first half Tuesday night. Langan had 14 points in the Jaguars 54-44 win. (Pete Bannan/MediaNews Group)

HAVERFORD — Through the Mike Brown era of Garnet Valley basketball, the blueprint has been simple.

Usually, and fortunately, there has been a standout guard. Always, they have been surrounded by players willing to do the dirty work, to screen at will, and ever ready to shoot from behind the 3-point line when the ball finds them.

Tuesday, Justin Langan put on display his offseason growth, scoring 14 points to go with 13 rebounds in a 54-44 win over Haverford in a meeting of PIAA Class 6A qualifiers last year. Langan was a little used bench piece last season for the Central League regular-season champion, averaging 3.8 points per game and hitting 19 3-pointers. As players have moved on, through graduation or second-leading scorer Neel Beniwal’s transfer to Phelps School, others have assumed larger roles, as the older players did a year ago, and the generation before, and so on.

Langan showed he isn’t just able to fill Chris Coyne’s void in the lane in doing the dirty work on the boards. He can also create off the dribble, as in a blow-by at the first-half buzzer, and a catch and shoot off a slip-screen from Carl Schaller to end the third.

“My dad’s been on me about that one in the scouting report,” Langan said of working off the dribble. “Last year, I was in mainly to shoot the ball. So this summer, I was working on trying to get the ball to the rim so that it’s harder to scout me. I tried to add that in and keep the shot going as well.”

That last basket was particularly clutch. The Jags (3-0, 3-0 Central) led by eight at halftime, 29-21. But the Fords surged in the third to tie the game at 33, with a half-dozen chances to take the lead. Garnet Valley had just two points in the frame until Langan stepped out and buried his third of four triples on the day.

“Carl runs our offense, he’s obviously the guy who handles the ball,” Langan said. “And that creates opportunities for other guys, so no matter who we lose – obviously losing Neel was really big – but it’s the next-man-up mentality, and he motivates us every day and practice and keeps us going.”

That left the door open for Schaller to put his stamp on the fourth quarter. The All-Delco point guard had five points through three quarters, playing off the ball and deferring to his eventual replacement, sophomore Max Koehler. But he found Langan for a 3-pointer early in the fourth, then drove to the hole for an and-1 to make it 42-36.

Schaller scored 13 points in the final frame, including 7-for-9 from the line; the Fords scored just 11 points in the stanza. Given the way last year’s season ended, with two losses by top-seeded Garnet Valley to eventual league champ Haverford, there was a little extra in Schaller pressing the foot on the pedal late.

“It was a pretty sour feeling last year, with the season that we had, to go out like that, shooting horribly, putting up maybe 30 points,” said Schaller, who added seven rebounds and four assists. “I definitely thought about it going into tonight, but the ultimate goal is to win every game, and that’s what we did tonight.”

On both sides, it was very much an early-season affair, with rust befitting the topsy-turvy lead-up. It didn’t manifest in turnovers, the teams combining for just 12. But neither shot well: Garnet Valley was 7-for-25 from 3-point land, Haverford 5-for-30.

Carl Schaller … EARLY ONIONS
Garnet up 9, 2 minutes left. Schaller has 9 of his 14 in the fourth pic.twitter.com/QTQMNCO6n7

John Seidman, Haverford’s All-Delco guard, was aggressive off the dribble early. He led the way with 26 points, but it took 26 shot attempts, Garnet Valley staying compact defensively to harass drives in the lane. That tactic became more pertinent as the Fords’ misses piled up.

“I think it’s kind of just game-by-game, take what they give you,” Seidman said. “Tonight, they were backing off and I wasn’t hitting most of my 3s so I decided to take it into the lane more. But I think as a team, we should’ve been more aggressive from the start. It worked in the third quarter.” Garnet Valley’s Carl Schaller hits a basket in the first half against Haverford Tuesday. Schaller had 18 points in the Jaguars’ 54-44 victory. (Pete Bannan/MediaNews Group)

Hunter Kraiza was just 2-for-12 shooting with six points and seven rebounds for Haverford (1-1, 1-1). Nick Colucci didn’t score (on an 0-for-8 shooting night), but supplied seven boards, five assists and smothering defense on Schaller.

Koehler scored 10 points for the Jaguars. Gannon McKee shook an 0-for-7 showing from 3 to score six points with five rebounds and four assists. Ryan Wootten, another new starter, hit a pair of first-quarter triples.

As ever, as Brown has navigated multiple generations of talent with results that have hardly diminished, the early season provides proof of concept: Fill the roles and work hard like your predecessors, and the results will follow.

“You go by example,” Schaller said. “And as it happens in games, people start believing, and you move on from there.”

Strath Haven 54, Penncrest 50 >> Luke Edwards scored 20 points, and Matt Schuler was 10-for-14 from the line on the way to 17 points as the Panthers claimed the latest chapter of the Media Bowl rivalry in overtime. Carl Borgstom added 10 points.

Marple Newtown 52, Upper Darby 42 >> Ryan Straub scored eight of his 16 points in the fourth quarter as the Tigers (2-2, 2-2) overcame a sluggish third quarter to get the win. Eric McKee hit three 3-pointers for 11 points, and Owen Mathes (eight rebounds) and Mike Tansey added eight points each.

Shareef Jones scored 24 points for the Royals in their opener.

North Penn leans on defense, rebounding to topple Souderton
ROUNDUP: Springfield gets some payback on Ridley