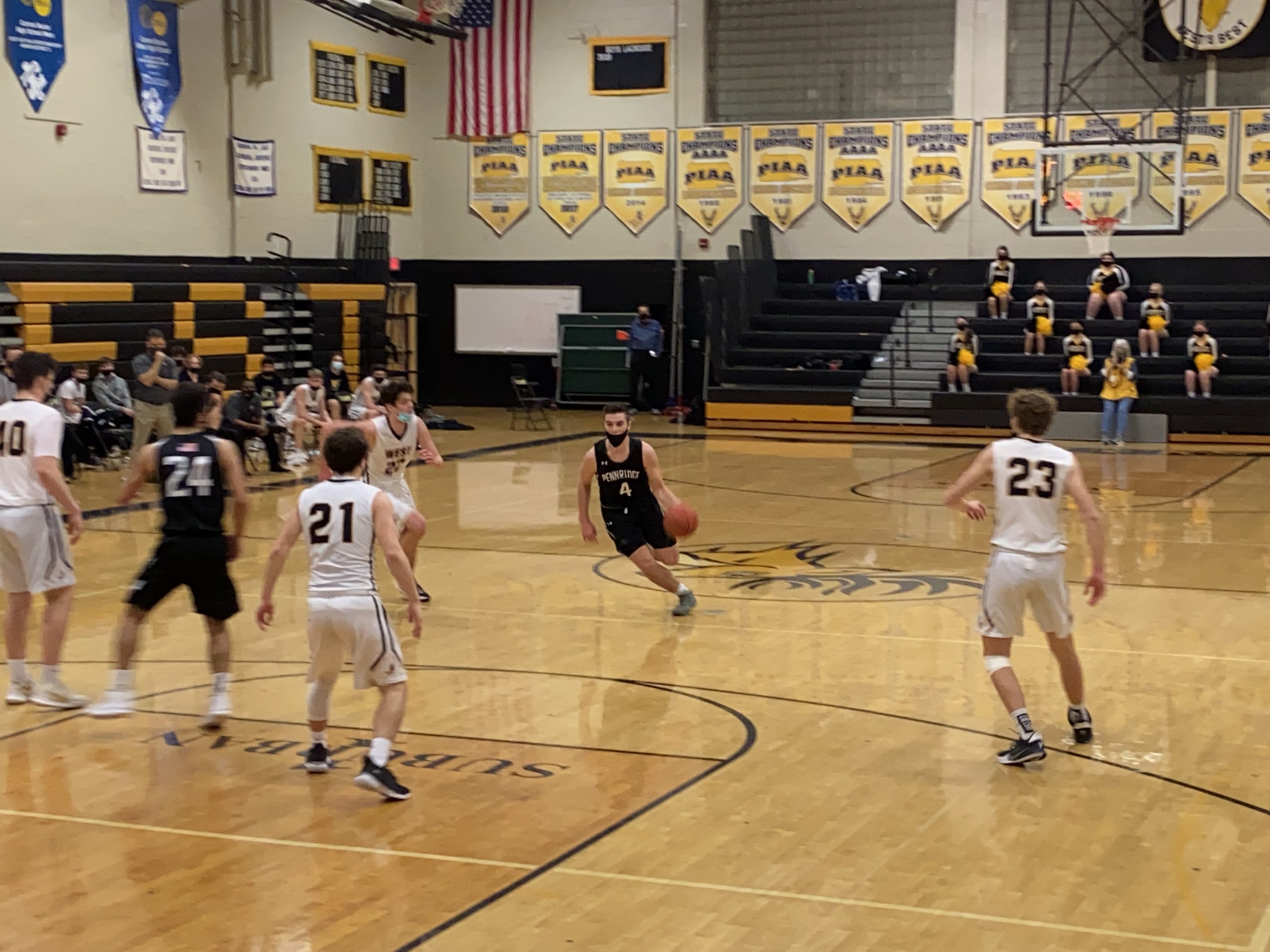 DOYLESTOWN >> Ten straight points to finish the first half sent the Pennridge boys basketball team into the break up by 14. Yet Rams coach Dean Behrens knew a response from Central Bucks West was coming.

“I kind of thought to myself we shot really well to end the second quarter and we held them to 17 points, they’re not going to shoot that poorly,” he said. “They came out and went on a, what, 7-0 run?”

The Bucks collected the third quarter’s first seven points, quickly cutting the margin in half. But the Rams made sure West’s rally would not pull any closer in Tuesday night’s SOL Colonial Division contest.

Luke Yoder found his scoring touch and Pennridge regained its defensive footing to push their lead back up to 14 by end of the third and kept the Bucks at bay in the fourth to claim a 55-40 victory.

“Defense was the only way we were going to win, to stop them cause again they’re a great team and coached by a great coach,” Yoder said. “So they knew what they were doing, coach knows what he’s doing so we just said we got to go one play at a time, got to get a stop and then we can do something on the offensive side.”

BOYS #BASKETBALL: @PHSRamsHoops’s TJ Grenda grabs an offensive rebound then finds Colin Monahan for a 3 from the top of the arc at the buzzer 🚨 at the end of the 3rd quarter vs. CB West. pic.twitter.com/CWGsuSgBQT

Yoder and TJ Grenda combined for the first eight points in the Rams’ 11-4 run to cap the third – Colin Monahan’s buzzer-beating 3-pointer extending the visitors’ edge to 46-33. The lead never dipped below 10 in the fourth as Pennridge (3-2, 2-1 division) won its second straight.

“I love it, this is great, we’re 3-2, we got blown out by [Central Bucks] East, we come back, we win two in a row,” Behrens said. “Everyone’s left us for dead. Hopefully we play again Friday. You never know, you get a phone call, you can’t play.”

Yoder scored nine of his game-high 18 points in the third while Grenda hit three 3-pointers in tallying 15 points – 10 coming in the first half.

“I thought TJ Grenda played outstanding tonight,” Behrens said. “He’s been giving us great minutes all year. So I give that young man a lot of credit. He had a track, cross country season – he’s really turned that in to a great basketball season. So his confidence is through the roof.

“I thought [Greg] Stumpo gave us great minutes, [Justin] Nichols is a younger guy playing for the first time, he’s played well. We finally got Colin Monahan back.”

BOYS #BASKETBALL: @PHSRamsHoops’s @lukeyo4 scores on a reverse layup & draws the foul 2Q vs. CB West. He made the free throw for the 3-point play. pic.twitter.com/hfpxBvPGWk

John Lee paced CB West (0-4, 0-3) with 14 points with Teddy Spratt scoring 10 of his 12 points in the second half. A Lee triple had the Bucks trailing 15-13 at the end of the first quarter but West tallied just four points the rest of the half – the last two on a Lee bucket inside that made it 21-17.

“I think it’s actually defense for us,” said Spratt, a Millersville commit. “I know that offense we’ve been struggling but if we just lock in defensively I think that the offense will take care of itself. When we give up buckets, we’re thinking about it and on the other end it affects us.”

“I think for both teams, one we’re playing – which is awesome, which is tremendous that we’re playing,” Behrens said. “Two both teams are pretty inexperienced right now. Obviously right now we have Luke and Colin [Post] and they got Spratt but most of the kids on the floor have not playing much varsity so it is a learning experience for both teams.”

Baskets from Nichols and Grenda had the Rams up 25-17 in the second quarter before Yoder’s three-point play off a reverse layup put the Rams up 28-17 at 1:11. Stumpo connected on a three from the wing to finish the 10-0 run and give Pennridge a 31-17 lead at halftime.

A Lee bucket, Payton Davis’ 3-pointer then two more from Spratt off a drive had the Bucks’ deficit down to 31-24 before Yoder snapped the 7-0 spurt with a steal and breakaway lay-in.

“Sherm [CB West coach Adam Sherman] made sure that we came out with some intensity,” Spratt said. “We were able to close the gap but not get the lead.”

West got within seven twice more in the third but Grenda drained a three to make it 38-28 and from there the Rams’ lead never dropped into the single digits.

Yoder followed with a jumper then after a Spratt bucket insider Yoder drained a three for a 43-30 lead.

“Just my guys on the team, they all said like we got your back, they’re there for me and if someone’s struggling they’re going to step up,” Yoder said. “So that’s what they did in the first half to get that huge lead so it was huge but then they give the confidence that I’m going to hit that shot.”

BOYS #BASKETBALL: @PHSRamsHoops’s Greg Stumpo knocks down a 3 from the wing off a Colin Post assist in the final minute 2Q vs. CB West. pic.twitter.com/s1lqYAhHVD

Spratt scored down low to make it 43-22 but in the final seconds Grenda grabbed an offensive rebound and found Monahan at the top of the arc for a trey as time expired in the third, giving the Rams a 46-32 lead.

CB West pulled within 10 twice in the fourth – the last time at 48-38 before a Grenda jumper and a Nichols gave Pennridge its biggest lead at 15, which the Rams matched with the final margin.

Grenda scored eight points in the first quarter, including the game’s first five points. After Lee’s three-point play at 51.6 seconds made it 12-10, Grenda hit a three but Lee responded with a triple to slice the Rams’ lead to 15-13 after the first eight minutes.