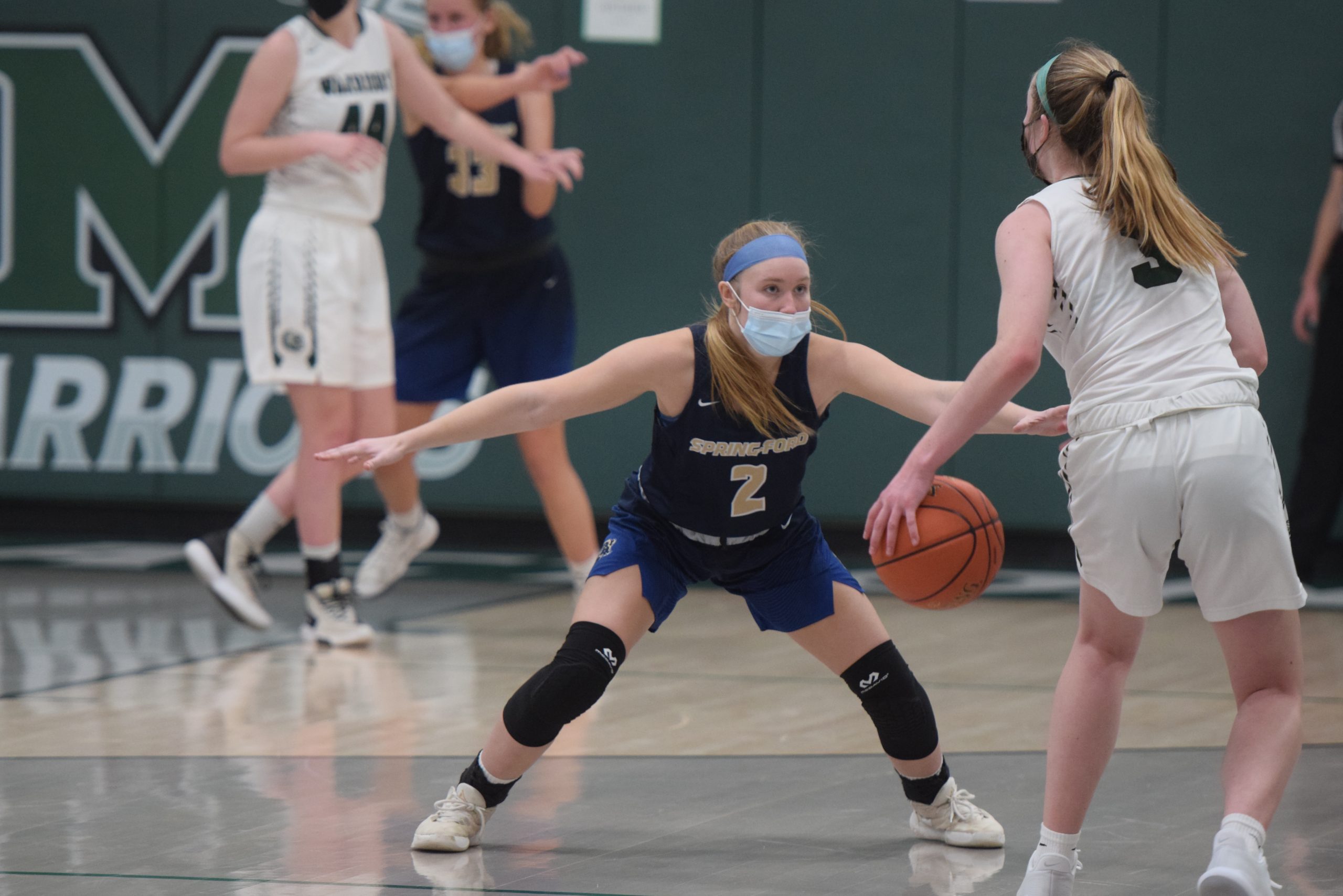 The Spring-Ford girls basketball team was at its point-scoring best Tuesday afternoon.

The Rams continued off their 2021 season by rolling Pottsgrove, 76-24. Three players combined for 50 points, all hitting double figures, as Spring-Ford bolted to a 48-15 halftime lead and sewed up the lopsided victory by playing shutout defense in the fourth.

Abbey Boyer led the way for the Rams with 19 points, 15 of them coming off 3-point baskets. Emily Tiffan was a close second with 17, and Lucy Olsen added another 14.

Mac Pettinelli chipped in with another seven in this non-divisional pairing of PAC schools.

Pottsgrove’s top scorer was Sierra Potts, collecting all nine of her counters off long-distance baskets.

Owen J. Roberts 35, Phoenixville 33 >> The Wildcats managed a come-from-behind victory in their season opener, earning a PAC crossover win over the Phantoms.

Avery White scored six of her game-high 18 points in the fourth quarter as OJR came back from a seven point halftime deficit (23-16). Gabbi Koury was OJR’s second-leading scorer with eight points.

Phoenixville’s scoring from only three players, getting 16 points from Dylan McAteer and 14 from Aubrie Breisblatt.
Berks Catholic 47, Daniel Boone 12 >> Keziah Brantley scored four of her game-high 11 points in the first quarter as the Saints breezed past the Blazers in Tuesday’s Berks League crossover game.

Santiago claimed game scoring honors with 20 points — 12 of them came off 3-point baskets — while Skrocki added another 18. For Pottsgrove, McMenamin Ryan had a game-high 16.

Spring-Ford 76, Upper Merion 0 >> The Rams opened the 2021 season by rolling over the undermanned Vikings in Tuesday’s non-divisional match between Pioneer Athletic Conference schools.

Alongside the eight forfeits it received, Spring-Ford scored four falls and a major decision. Franny Undercuffler had the fastest of the Rams’ three first-period drops, needing just 47 seconds to get the slap in the 189-pound finale.

Other falls were scored by Jeremy Wentworth (215), Ryan Lepore (138) and Zach Needles (152). Quintin Smith completed the hosts’ point production with his major at 126.

Boone splits >> The Blazers went 1-1 in Tuesday’s Central Penn League tri-meet with Wilson and Twin Valley. Boone was handled by the Bulldogs 113-63 but subsequently rolled past the Raiders 136-10.

Ty Czeiner gave Boone top honors in diving against Wilson with a score of 159.35 points.

Boone goes 1-1 >> The Blazers split Tuesday’s Central Penn League tri-meet with Wilson and Twin Valley. Boone was outswum by the Bulldogs 142-40, but it broke even with a 111-19 win over the Raiders.