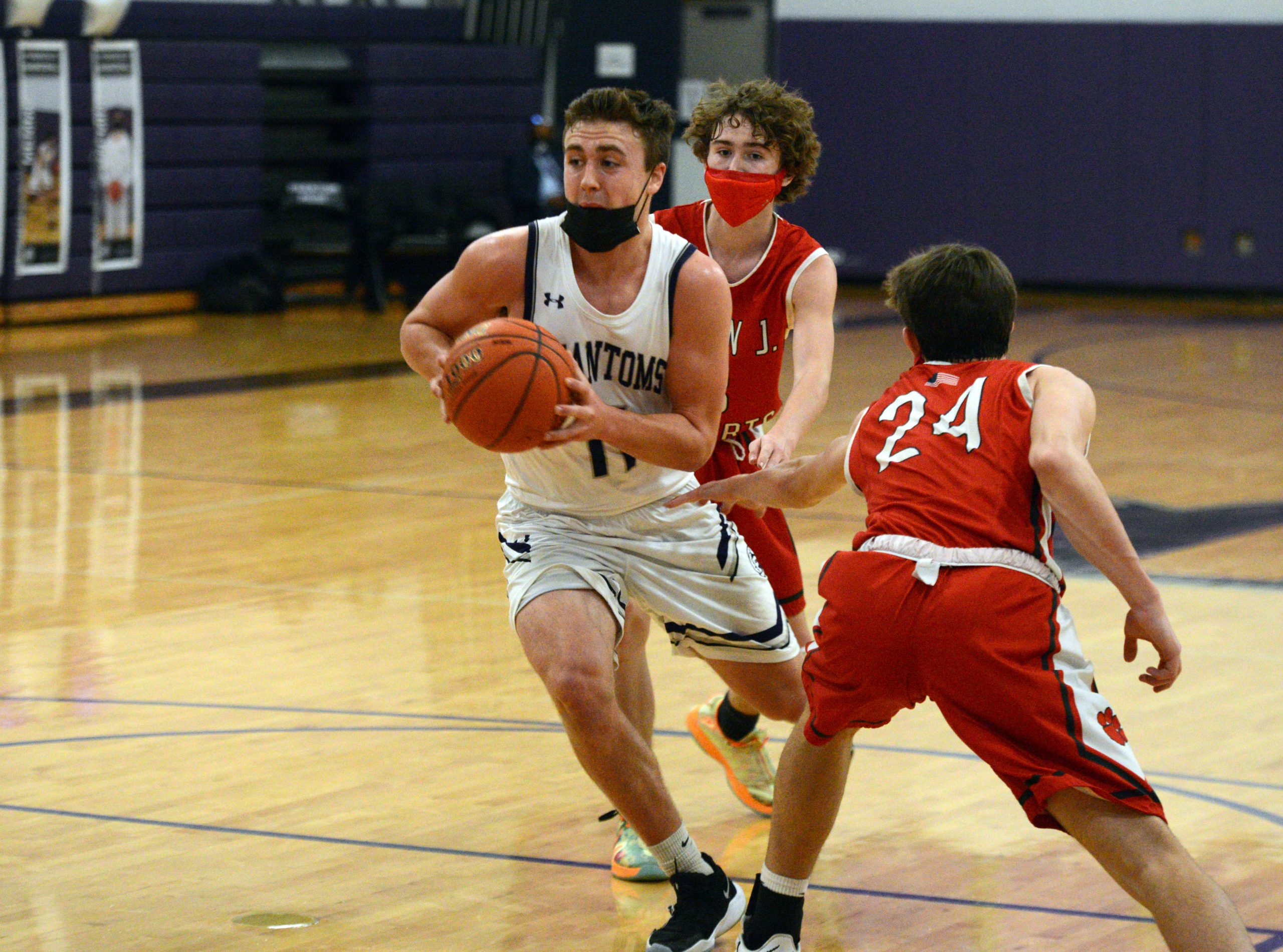 PHOENIXVILLE >> With Owen J. Roberts clamping down on Phoenixville senior sharpshooter Mike Memmo in the second half, the Phantoms needed to look elsewhere to turn the tide of Tuesday’s Pioneer Athletic Conference crossover matchup.

After Memmo’s torrid start put his team up by as many as 15 points in the first half, Phoenixville’s advantage completely evaporated early in the fourth.

Senior Kade Breisblatt answered the call, knocking down a three to give Phoenixville back the lead. Breisblatt scored eight of Phoenixville’s first 12 points in the final period and his triple with a little more than three minutes to play extended Phoenixville’s lead to seven, helping give the Phantoms some breathing room before they pulled away to a 68-55 victory down the stretch.

Memmo led all scorers with 26 points, 20 of which came in the first half. Senior Will Allain added 13 and Breisblatt finished with 11 for the Phantoms. Freshman Luke Fryer scored 19 for OJR in his varsity debut.

“I just found my rhythm. I just had to have a different mindset going into the second half,” said Breisblatt, who was scoreless heading into halftime. “I got my shots and just knocked them down.”

“Mike’s one of our biggest leading scorers, so others guys had to step it up,” he added. Kade Breisblatt corner three puts PHX up 60-53 with a little more than three to play. pic.twitter.com/KfJdvFiede

The Wildcats led twice in the third before trailing 48-45 heading to the final period. Fryer tied the game twice early in the fourth with two deep threes.

Senior Sam Cerimele followed Fryer with 12 points for the Wildcats, including a nine-point third quarter. Johnson scored 10 for OJR.

“It’s a mixture of old and new, but even last year we got bad experience I think,” OJR second-year coach Bill Detweiler said of his team’s experience level, alluding to a number of lopsided contests during a 4-18 campaign in 2019-20. “When you play an experienced team like this, they shot the ball really well out of the gate—and Eric does a great job; he’s a great coach—so we got a little behind there, but I loved the way we battled back.”

With offensive firepower like Memmo, Allain and Breisblatt back from last season, the Phantoms prided themselves on the defensive end in the preseason.

After his team allowed OJR to outscore them 19-12 in third quarter, Phantoms’ coach Eric Burnett made some lineup changes to help Phoenixville solidify itself on the defensive end.

Will Allain pull-up jumper puts Phoenixville ahead 55-51 with 5:26 to play. pic.twitter.com/vJKEikkxgp

Senior Jackson Brustche, who had all four of his points in the third quarter, was one of the main Phantoms to spark his team on the defensive end of the floor, finding a way to get his hands on the ball and cause havoc for OJR’s offense. Elijah Martin, Dallas Maloney and Jackson Kuranda were three others Burnett praised for their defensive play and ‘hustle plays.’

Phoenixville, which had given up a combined 36 points in the second and third quarters, outscored OJR 20-10 in the fourth to close things out. Along with the sharpshooting of Breisblatt, Memmo and Allain both had six points apiece in the fourth and went a combined 8-for-8 from the free throw line.

“Our identity has to be on the defensive end,” Burnett said. “We let up 19 points in the third quarter and that just can’t happen. We put some other guys in there, and it kind of looked like they had some fresh legs.”

“(Brustche) did so many plays diving on the floor, hustling back on defense, tips, deflections that made a huge difference,” he added. Fast Starters >> This was the second straight game Memmo and the Phantoms got out to a strong start. Memmo had nine first-quarter points to help Phoenixville jump ahead 13-4 after a quarter in an opening night win over Upper Merion.

Memmo scored 15 points in the first quarter Tuesday, knocking down six of his seven shot attempts, as the Phantoms jumped out to a 20-9 advantage after the first eight minutes of play.

“Our key was to set the tone on offense and defense,” Memmo said. “We did. We executed all our plays, found the open shots and started knocking them down.”

OJR hasn’t had a whole lot of practice time either. The Wildcats have been on and off the court this winter with OJR shutting down twice since returning for winter break. Coach Detweiler said with the high school closed this weekend, he found a gym with a half court to get some work in.

“Preparation’s so important. You’ve gotta get your guys in the gym,” Detweiler said. “It hurt us, but everybody’s got issues. This year I can’t use that an excuse. … I’m proud of our guys.”

Senior Celebration >> Phoenixville has nine seniors, the most Burnett said he’s had during his time coaching at Phoenixville. With the potential of COVID-19 canceling games in the future, the Phantoms celebrated Senior Night, usually reserved for the final home game of the year, a little early this season on Tuesday.

“We’re very thankful to have that opportunity,” Burnett said. “With everything going on it’s just uncertain. So for the Phoenixville School District and Mr. Don Grinstead to set it up at the beginning of the season and give these guys an opportunity to celebrate with their families was special.”