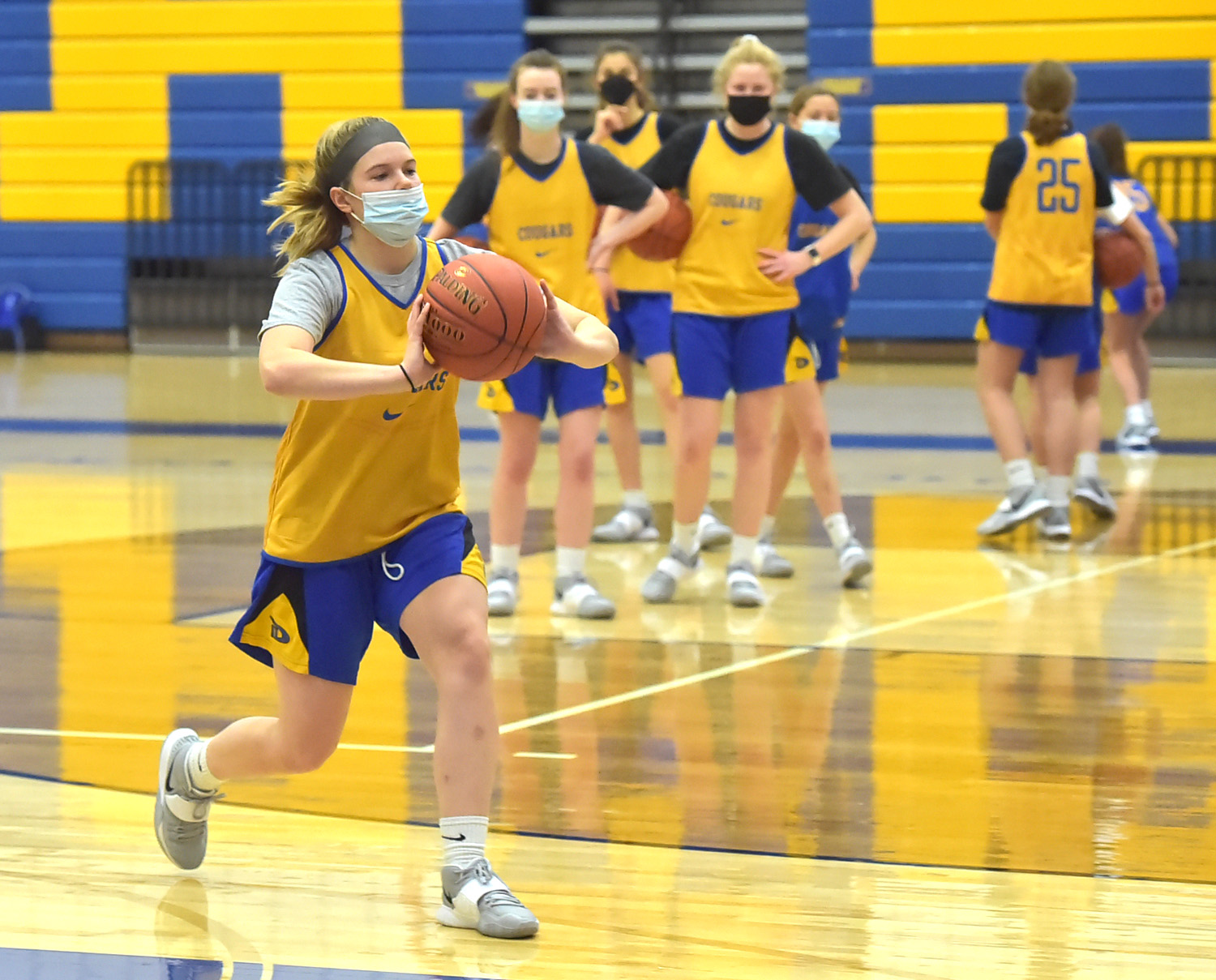 The winter high school season is going to be abridged, and there are no guarantees that it will avoid coming to a premature halt, as it did in 2020 due to the coronavirus pandemic. But on the basketball court, the intrigue for the Ches-Mont League girls’ title chase looks like the real deal.

The favorites in each division — Downingtown East in the National and Great Valley in the American — haven’t changed from a year ago. But the number of legitimate contenders has expanded.

“I think it’s going to be a tight race on both sides,” said Great Valley head coach Alex Venarchik.

His Patriots are coming off, perhaps, the greatest season in program history, but will be without the graduated Tessa Liberatoscioli in 2021. And Downingtown East won’t have dominant 6-foot-5 center Bella Smuda, who is now playing Division I college ball at Liberty.

Big shoes to fill, indeed. But the Pats and the Cougars both return the rest of their starters.

“While the loss of Bella will be impossible to ignore, our team would like to build on last season’s effort and intensity,” said Downingtown East head coach Tom Schurtz. Smuda was a four-year starter, scored more than 1,000 career points and rebounds, and guided the Cougars to the last two league crowns. East may have the area’s premier backcourt, however, with two-year starters Caroline Brennan, Mary McFillin and Lauren Kent back in the fold for a third. Cassidy Denning and Eileen Hewitt provide additional depth for the Cougars, who were 21-9 a year ago.

“Having experience at the guard position will be critical in this year’s shortened season,” Schurtz pointed out. “With speed and athleticism, we hope to build on a defense that only gave up 37.9 points per game during league play last season.”

The biggest obstacle in the National Division race is West Chester East, who returns all five starters, including star Lauren Klieber. The Vikings were 18-10 in 2019-20 and earned the program’s first state tournament berth in 18 years.

“Expectations are high — led by a talented and deep senior class,” said East head coach Erin Listriani. “We are looking to exceed last season’s accomplishments. I’m hoping for the opportunity to create more memories with this special group.”

Klieber is a four-year starter who averaged 17 points and 7.7 rebounds per game as a junior and knocked down more than 50 3-pointers. Point guard Mary Grace Kerns, guard Olivia McDonald and forward Megan Merten are all seniors with multiple years of starting experience, and sophomore guard Mikayla Kushner could be a future standout.

It may be a two-team scramble at the top, but the C-M National looks to be deeper from third place through seventh. And somebody (West Chester Henderson?) may step up and challenge.

“Downingtown East has a lot coming back, but so does West Chester East,” Venarchik said. “But (West Chester) Henderson is going to be tough every night too.”

“I expect this team to take lessons and experiences from last year’s 12-11 season and build on it,” said Warriors’ head coach Greta Neff. “We will continue to use defense to fuel our offense, and look to use our athleticism and size in any way possible.”

Bishop Shanahan finished in a third place tie in ’20 and boasts returning starters: senior guards Jacey Petruno and Cara Wankmiller, and senior forward Shannon Donahue. It will be difficult to replace the scoring of Kathryn Greenhut and Giana DeMarco, however.

“We will have to lean on Shannon and Jacey to provide scoring while the young kids work their way through,” said Eagles’ head coach Jim Powers.

Coatesville, Downingtown West and Avon Grove may not be in the title mix, but all three could be better and could play a role in who wins it. Coatesville was 9-13 last season and has a dynamic guard in senior Dasani Peoples, who led the Raiders in assists, steals, blocks and minutes. Junior Danae Ellzy is the top returning scorer (13.6) and sophomore Paityn Forest paced the team in rebounding (7.4).

Downingtown West looks to rebound from a 6-16 season with four starters back, including senior frontcourt player Shayla Johnson (12 points per game). Avon Grove lost 75 percent of its scoring, but is still looking to make strides under third-year coach Bart O’Connor. Guard-forward Annie Cavalier leads the way along with fellow seniors Kylie Norris and Molly O’Connor.

The Ches-Mont American is also expected to be competitive even though Great Valley starters Ashley Sullivan, Emily DuPont, Emma DeRobertis and Gracen Curley are back. The Patriots went unbeaten in league play a year ago, advanced to the district title game and went 23-5 overall.

“I think the (Ches-Mont) American side is going to be pretty evenly matched,” said Unionville head coach Fred Ellzy. “Great Valley and (West Chester) Rustin are always competitive and will probably be the top two teams to beat on our side.”

“We offer a great deal of athleticism and talent and these girls are anxious to get back out on the court to pick up where we left off last season,” Stackhouse said.

Unionville has a load of returning starters, including junior forward Anya Budow, who missed much of last season with a knee injury. Guards Emma Dempsey and Riley Angstadt, and forward Alexia Brown are the others. A year ago UHS went 14-9 overall.

All-league senior guard Cristina Fernandez leads the way for an Oxford team that went 7-14 last season. Similarly, Kennett has a proven senior in Ellie Matthews but she will need. The Blue Demons were 3-18 in 2019-20.

“On our side, Rustin and Unionville are bringing back a lot of offensive firepower,” Venarchik said. “But more so this year than any other, it’s going to be a sprint and the team that can find their winning ways quickest is going to have a shot at the title.”

In his first season at the helm in 2019-20, head coach Fran Burbridge guided Westtown to its first Friends League title in 23 years. Backcourt starters Alexzeya Brooks and Melia Van-Otoo are back, and so is 6-3 center Nzingha Rothmiller. Brooks has already signed to play basketball collegiately at Division I UMass.

“This year’s team should be an exciting and fun team to watch,” Burbridge said. “We should be a team that has the ability to score the ball.”

The lone returning starter at Villa Maria is guard Carina Chieffalo, but forward Faith Iacone is poised for a breakout season. Longtime head coach Kathy McCartney had the Hurricanes in the state quarterfinals when the 2020 season was halted.

“We lost four starters to graduation so we will have a lot of new faces in the line-up this year,” she said. “Our young players have shown very well in practice so far and that coupled with our senior leadership should really help us rebuild.”

Despite having a squad with no seniors among its playing rotation, Conestoga coach AJ Thompson believes his group can improve on last year’s 7-15 record. Sophomore forward Kate Galica and junior guard Katie Faith are returning starters.

“The last two seasons we have taken steps forward to compete each and every night in the Central League and I think this team will continue that trend and might even surprise a few people along the way,” Thompson said.