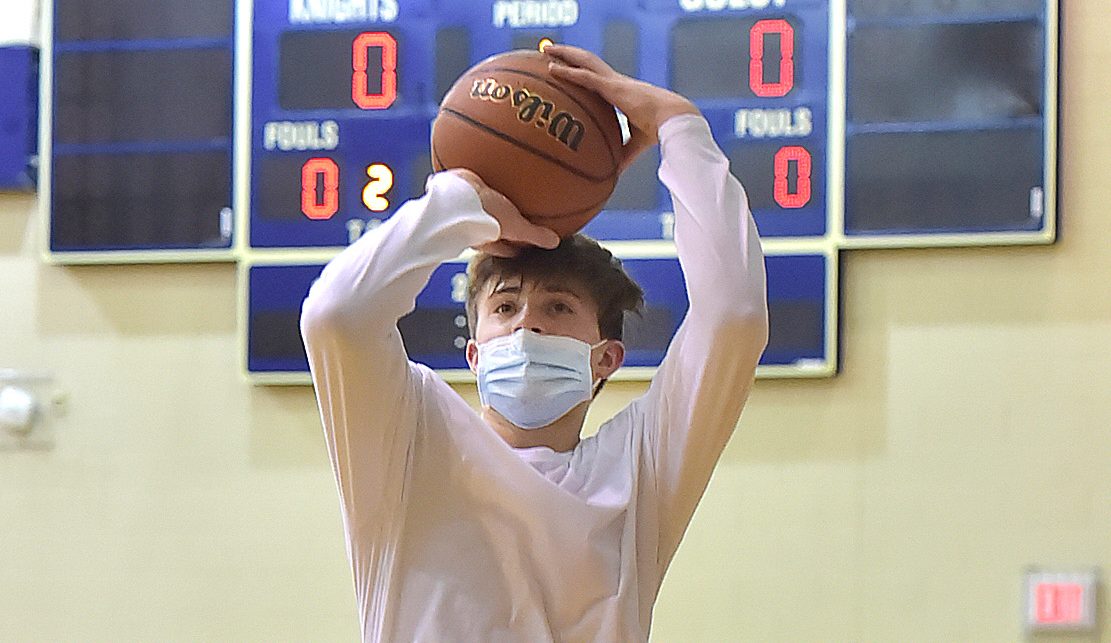 WESTTOWN >> It’s said that good things come to those who wait. And while players, coaches and fans are waiting for the 2021 high school boys basketball season to begin after a postponement due to the COVID-19 virus, West Chester Rustin senior star Griffin Barrouk is more than used to waiting to get on the floor.

Due to knee and hamstring injuries in his sophomore and junior seasons, Barrouk had to join the Golden Knights late in the year in both of the last two seasons.

As a sophomore, Barrouk came back to score 36 points in the Golden Knights’ PIAA Class 5A opening round playoff game against Mastery Charter. Last season, Barrouk came back late in the regular season and was a big reason Rustin advanced to the second round of the PIAA tournament.

Now completely healthy, Barrouk is raring to go as the Ches-Mont League season will finally starts this week. “I really think I can handle what I’m going through this season a lot better because of what I had to do the last two years,” Barrouk said. “Right now, I am just excited to be playing games and the goals here at Rustin are the same as every year. We want to win a state championship. We want to get the Ches-Mont title first and then districts, but the ultimate goal around here is the same as always, and that is to go all the way.”

One of the most accurate 3-point shooters in District 1, Barrouk — who has shot up to an impressive 6-foot-4 — says his decision to commit to Division I Hofstra University this past summer was based on him being viewed as more than a shooter and more of a complete basketball player and person.

“The reason I am going to Hofstra is that from the very beginning of them recruiting me, they viewed me as more than just a shooter,” Barrouk said. “They also really asked me things about how life was off the basketball court. They really made me feel like family. I put on a lot of muscle over the quarantine time and I feel I am a better defender than I used to be. Hofstra was just a perfect place for me.”

Rustin head coach Keith Cochran depends on his senior sharpshooter for more than just daring 3-pointers, and he feels that Barrouk is a complete player, and that Hofstra is getting a very talented all-around player.

“Griffin is definitely a complete basketball player,” Cochran said. “He can really shoot the basketball, there is no dispute about that. But he does a lot of other things on the floor that lead to wins. He is definitely a Division I basketball player. He can rebound, he likes to defend and he has sprouted up to 6-4 and he is a lot stronger than he was as a sophomore. He is also a real team player and a very good teammate. His basketball IQ is also very, very high.”

West Chester Rustin is always at the top of the Ches-Mont League standings, and a big player in the District 1 5A playoff scene. The Golden Knights, under Cochran, have developed quite a little rivalry with Unionville, which is coached by former Rustin guard Chris Cowles. Unionville knocked the Golden Knights out of the PIAA tournament last season, and Barrouk’s Knights expect Unionville to be Rustin’s chief nemesis again this season.

“We have a rivalry with them because we seem to be beating each other and matching up with them every year in the playoffs,” Barrouk said. “Those games are games I really want to win. They are very well coached and we like to play them.” Unionville should be the main challenger to Rustin in the Ches-Mont American Division. Unionvile graduated four of its five starters from last season but still features senior 3-point artist Sean Neylon and the rugged Jack Regenye, along with Sean Lenkitis, to keep Unionville near the top of the division.

After the top two teams, there is a lot of parity. Great Valley will be trying to bounce back from a disappointing season, at least by the Patriots’ standards. Junior Julian Steinbrenner is one of the best shooters in the Ches-Mont, and senior Will Fredrick can score inside. Senior Bryce Broxton will also help the Patriots try to get back to the district playoffs this season.

Kennett and Oxford both have second-year coaches and both the Blue Demons and Hornets hope for better things this season. For Kennett, coach Jacob Gray will be counting on senior Andrew Hertz, a three-year starter, and slasher Caleb Frazier to boost the Blue Demons’ fortunes. Oxford coach Brian Urig hopes to blend his returning seniors in with some talented former junior varsity players to improve on Oxford’s four-win season of a year ago.

In the Ches-Mont National, defending champion West Chester East lost a ton of points with the graduation of Andrew Carr and Tym Richardson. The pair accounted for an average of 45 points per game, but the Vikings’ cupboard is not bare. Seniors Mike Dedda and Kieran Hefferan can both light things up from the perimeter and sophomore Jack Kushner had a big year as a freshman.

Coatesville will be athletic and the Red Raiders will try to push the ball and play man-to-man pressure for 94 feet. Senior strongman Abdul Sabur-Stewart and junior Jaeden Brickus, who is one of the better scorers in the Ches-Mont, will lead the Red Raiders for coach Marc Turner.

Maybe the favorite in the National Division will be Downingtown West. The Whippets have exciting sophomore point guard Dylan Blair, to go along with 6-foot-4 Jake Warren and senior 3-point shooter Sean Kaiser.

Downingtown East will be led by Millersville University commit Jayden Rowe. Rowe can shoot from the perimeter, drive strong to the basket, and even get on the boards. Senior strongman George Bousum and shooter Joe Belbin will help the Cougars’ fortunes.

Three teams looking for better days are West Chester Henderson, Bishop Shanahan and Avon Grove. Henderson features senior point guard Shawn Fay and inside Ryan Kirby can do some damage. The Warriors will attempt to slow games down and win with defense.

In the Central League, everyone will be chasing Lower Merion and Garnet Valley. Conestoga coach Mike Troy has a very representative team of Pioneers that look up to the task. Senior guard Austin Fontaine can penetrate and is a good shooter. Pioneer senior Jack Liedtka is arguably the best 3-point shooter in the league.

The Inter-Academic League is tipping off in early February, and reigning champion Malvern Prep looks to be very tough again. Towson University recruit Rahdir Hicks may be the best on-ball defender in the league, and he also averaged 14 points per game last season as a junior. Big man Fran Oschell is a bull inside and the Friars also feature senior all-around start Lonnie White, who will help on the backboards.

If the Philadelphia Catholic League does have a season, Devon Prep has exciting West Chester Rustin transfer I.V. Pettit to run the floor and score in transition. Big man Eamon Walsh is also a mainstay for the Tide.

Westtown, Church Farm School and Collegium Charter have opted to not play basketball this season due to COVID-19.