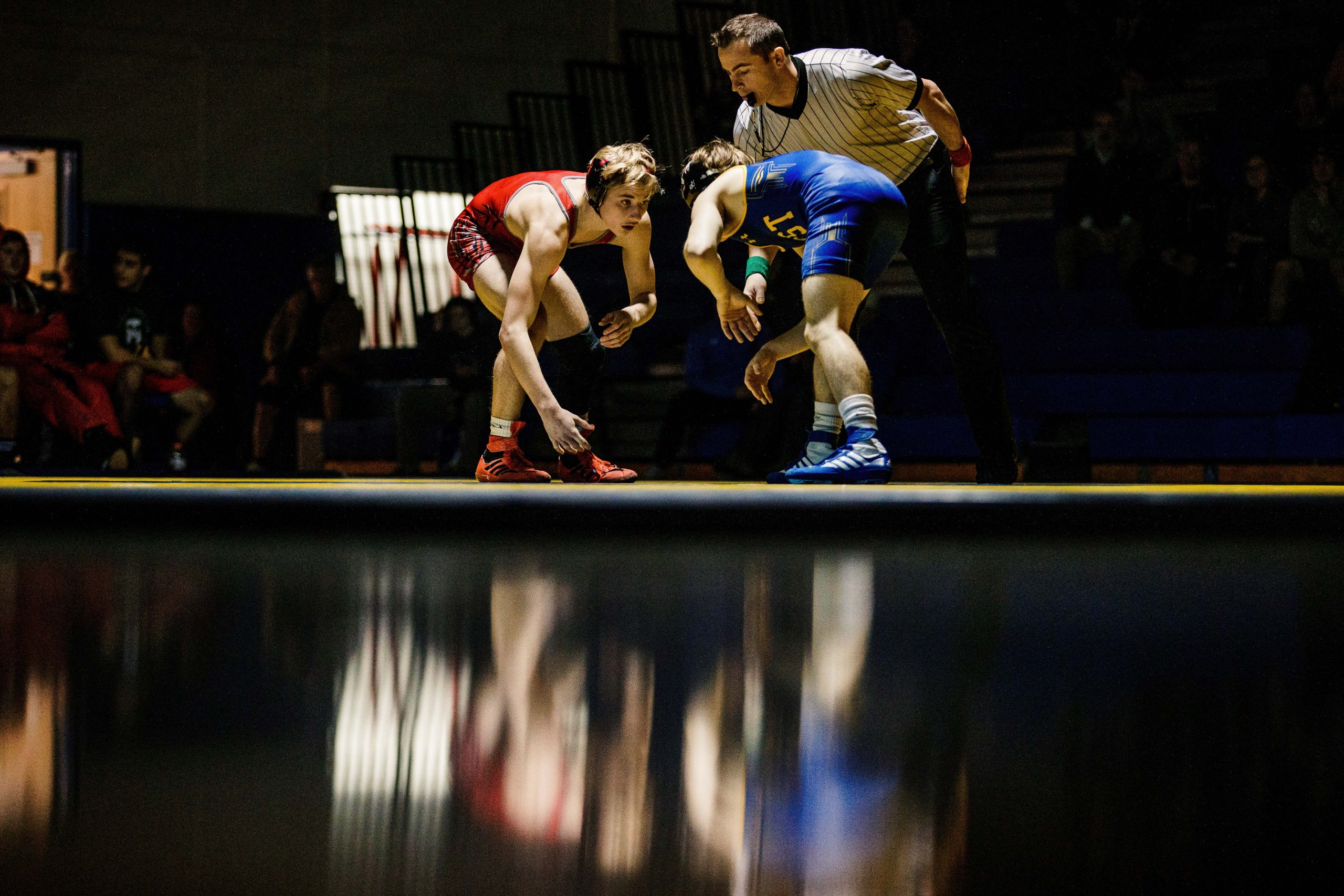 Despite producing six state medalists since 2014, Coatesville has never been regarded as a wrestling powerhouse.

Individually, though, stars have developed, and senior Nate Lucier is the latest.

Coming off a sixth-place finish at the Class 3A PIAA tournament, Lucier has had to wait an extra month to begin his quest to climb all the way to the top of the podium.

The COVID-19 pandemic has delayed the start, and threatened the feasibility of actually finishing the wrestling season, but the social distancing, restrictions and isolation hardly phase Lucier, who’s made a career out of finding ways to improve without marquee help in the practice room.

“Wrestling is a unique sport, where, if you set your work ethic and goals and priorities high enough, you can attain the same thing as anyone else,” Coatesville coach Jeff Bowyer said. “It’s not as convenient to find different partners and extra work, but if you’re driven and focused, it’s attainable, and he’s done that.” While the PIAA has delayed starts to the sports seasons and put limitations on competitions, clubs and individuals in all sports have been putting in the time behind the scenes.

Those are, at least theoretically, voluntary, but slacking off or self-pity was never an option for Lucier.

“There’s definitely been ups and downs,” Lucier said. “You get those low moments where you think there might not be a season. You have to keep grinding and keep practicing and lifting and treat it like you’re going to have a season. If you don’t, you’ll fall off.”

Coatesville’s Nate Lucier tries to hold in a 3-0 loss to Seneca Valley’s Dylan Chappell in the 120-pound semifinals. (Nate Heckenberger – For MediaNews Group)

After two very solid seasons, Lucier broke out as a junior, going 40-5 with his first sectional and regional titles at 120 pounds. He reached the state semifinals with a pair of wins, before dropping a trio of close decisions in the consolation bracket.

He’s now four wins away from 100 for his career, but going undefeated at states is the encore he’s set his sights on.

“As soon as I lost (in the semifinal), I just wanted to get the state finals and win it,” Lucier said. “Every day I couldn’t stop thinking about it. … A state championship is the goal, getting there and doing everything right, wrestling smart. I want to get to the finals and do what needs to be done.”

Malik Lavalais and Nate Meyer are tied for second on Coatesville with 22 career wins. Lavalais and Lucier sharpen one another in practice at 138 pounds, while Lucier works his way to 132.

In a day when families send their athletes to the greener pastures of more-renowned programs, Lucier’s outlook is refreshing.

“My partners have give the best looks they can,” Lucier said. “You just have to do more than expected. You have to do more reps and work your hardest. Other people don’t think it, but I still think they’re the best guys.”

Lucier is committed to wrestle for Binghamton University after high school, where he’ll get a familiar practice partner in Zack Trampe, formerly of Council Rock South.

The Bearcats will be getting a wrestler who’s gotten there on the back of an abundance of hard work and determination.

“Kudos to his support group and (Lucier’s) mother and father who have provided him the opportunity to be able to do that,” Bowyer said. “That’s one of the reasons he’s reached such high levels. People use (practice rooms) as a crutch, but you have to make your opportunities.”

Coatesvillle’s Nate Lucier eyes up Bellefonte’s Lane Aikey in a 1-0 win in the 120-pound quarterfinals. (Nate Heckenberger – For MediaNews Group)

Coatesville starts its season with a tri-meet against Downingtown East and West Chester Henderson, January 23. Along with Lavalais (138) and Meyer (189), Bowyer expects senior Brett Fick (215), a fifth-place finisher at the West sectional, to take the next step in his progression.

Evan and Jason Seagraves are also a couple names to watch around 145 pounds.

“We’re trying to figure out how will we use the opportunities to help each individual peak in about six weeks before the postseason,” Bowyer said. “The kids we have in there, they’re focused on how much better can we get.”

As for the COVID season/postseason, the Ches-Mont League plans to start competition January 23, utilizing tri or quad meets to knock out multiple duals in a day.

The District 1-3A Duals are tentatively slated for February 13, with just four chosen teams participating. The champion would be the only team to advance to the PIAA Duals, which are currently postponed until after the individual state tournament in March.

As of now, the 3A individual postseason will begin February 20, with two sectional tournaments in District 1. The hope is to allow 12 wrestlers per weight, which would be selected by a committee, with the top four finishers qualifying for the Southeast Regional tournament.

*In the Ches-Mont, it appears West Chester Henderson is the team to beat, especially in the National Division. The Warriors have won back-to-back division titles and bring back seventh-place state medalist, Sammy McMonagle (145), and five other regional qualifiers — Carmen Cortese (113), Max Jackman (120), Palmer Delaney (152), Bobby English (160) and Koh Bauman (189). Billy Wilson (126) was a regional qualifier two years ago, as well. The Warriors only have four seniors in the lineup, so any action they can get this year will help for one last stand next season.

*The two Downingtowns will be chasing Henderson with similarly constructed lineups. West has graduated a trio of state medalists the last few years, so the lineup needs to be built up from a depth perspective, but there is still some star power. Junior Dom Findora (132) leads the way in that department, as a two-time state qualifier. Sophomore Mason Hale (189) and senior Matt Micale (215) are returning regional qualifiers. Senior Dan Lilley (152) gives them experience in the middle and Ryan Gallagher (172) is a sleeper to keep an eye on. Freshman heavyweight, Troy Mack, was a Pennsylvania Junior Wrestling state qualifier.

*Downingtown East has its own star power, with a couple seniors, Keanu Manuel (126) and Matt Romanelli (189), hungry to finally find the state podium. Both were a win away from a state medal as juniors. Ryan Loraw (132) made an unexpected trip to Hershey as a freshman, and Bo Horvath (172) and Ray Wileczek (215) advanced to regionals last year. Much like last year, the Cougars’ struggle will be to find wins and limit points outside of their heavy hitters in the lineup. *West Chester East has no returning regional qualifiers, but that doesn’t mean the Vikings are bereft of talent. Max Parnis (120) led the team in wins as a freshman, with a 28-6 record, and is primed to make some noise. The Vikings have solid experience with seniors Sam Parnis (126), Andrew Luke (145) and Justus Lamb (160) in the middle of the lineup, and Connor Whitton (106) and Jefferson Cooper (132) boasted winning records last winter.

*Avon Grove is working on building up the program under second-year coach Bill Kirwin. Josh Reuter (285) made regionals in his first year of high school wrestling and is a strong, physical junior. Fellow junior, Dominic Osborne (189), and sophomore Garret Landon (152) took sixth at the West sectional last season and should be in the mix to advance further. The Red Devils are almost entirely underclassmen, and Christian Ford (106) is a talented lightweight as a freshman, so the squad will look to continue building for the future.

*In the American Division, there is some talent to go around, as multiple teams look poised to contend in the next year or two. Sun Valley is the returning champ and returns almost everyone, though one loss — two-time state champ Hunter Catka — was monumental. *Oxford will be right back in the mix, again, after losing to the Vanguards by two a year ago. Junior Cannon Hershey (120) was a state qualifier, and Cooper Johnson (145), Landon Meredith (152), Jeremy McKinney (172) and Kelvin Figueroa (215) reached regionals. Ben Smith (126) and Reiland Canaday (113) were 28 and 26-match winners, respectively. Oxford did not lose much to graduation, but the level of urgency will be elevated for seniors like Johnson and Meredith who have been on the doorstep multiple times.

*West Chester Rustin has been a mainstay at the top of the American, but for the first time, ever, numbers will be an issue. Former state qualifiers, Josh Viarengo (transferred to Malvern Prep), and Alex Pratzner (football injury) are missing, as well as a few opt-outs due to COVID. Those who remain form a solid core, however, with returning state qualifier, Jimmy King (126) and regional qualifier, Chris Yanko (172). Seniors Charlie Baldesari (138) and Matt Griffith (182) provide stability, and freshmen James Pizzi (106) and Drew Brown (172) could add some spark. Marek Seaman (160) is back on the mat after not coming out as a freshman, after a strong youth career.

*Kennett is a team seemingly on the rise, with some talent in the pipeline from a dedicated youth program. John Pardo (215), who was a third-place finisher at PJWs, and Michael Pepe (126) highlight an encouraging freshman class. While the future looks bright, it’s all about the present for senior Trent Kochersperger, who made states in his third trip to regionals. Paul James Pebly (145) was a fellow regional qualifier, and Josh Barlow (145), Josh Kochersperger (152) and Darrale Barrett (160) round out a formidable middle of the lineup. *Down route 82, it’s unsure if Unionville will wrestle, but if it does, there is some talent to display. Sam Elsen (172) leads the way as a two-time regional qualifier and has 32 pins in 46 career wins. Topher Tryon’s (132) promising freshman season was cut short due to injury, and he, along with junior Jackson Roberts (152), can give Unionville some wins in the middle. Mason Coursey (106) is a freshman with some prospects.

*Great Valley continues its quest to build a contending program in the second year with Bobby Lavelle at the helm. Lavelle has not had any star power as a foundation, so the process presses on, from the ground up. Nick Mort (152) finished sixth at the North sectional last winter and gives the Patriots some toughness as a junior. Senior Aidan O’Neil was 20-match winner and he sets the tone. *In the Central League, Conestoga got a later start than some of the other schools, but seven Pioneers with 22 wins or more last year, return. Junior Mitch Baker (126) and sophomore Hayden McLellan (152) reached regionals, and Morgan Lofland (160) sits 13 wins away from 100, as a senior. Lofland finished sixth in the region as a sophomore but injuries hindered him last winter and he placed fifth in the North sectional. Fellow seniors, Liam Walker (138) and Nick Arbes (172) set up Stoga with a competitive team. *The best team in Southeast Pennsylvania resides in Malvern, with national power, Malvern Prep. The Friars already wrestled a two-day duals tournament and are stacked again. Fortunately for Malvern, the prep ranks kept 14 weight classes. Nick Feldman (220) and Jack Wehmeyer (182) are ranked No. 1 and 2, respectively, in the country by MatScouts. Cole Deery (285), who reclassified as a junior, is ranked No. 4 and Caden Rogers (195) is No. 22. Tommy Link (120) and Andrew Connolly (170) are returning All-Americans, as is Owen Vietmeier (220), though he likely won’t have a starting spot. Nik O’Neill (113) enters as one of the top ranked freshmen in the state, and Nathan Rickards (132) and Nick Wehmeyer (152) aren’t far behind. Rickards and Josh Viarengo are battling it out for the starting spot, and another pair of locals, Cody Ford (106, Kennett) and Spencer Barnhart (126, Avon Grove) make this lineup deep throughout.

*Church Farm School and Westtown School will not be participating in wrestling this winter, due to the pandemic.