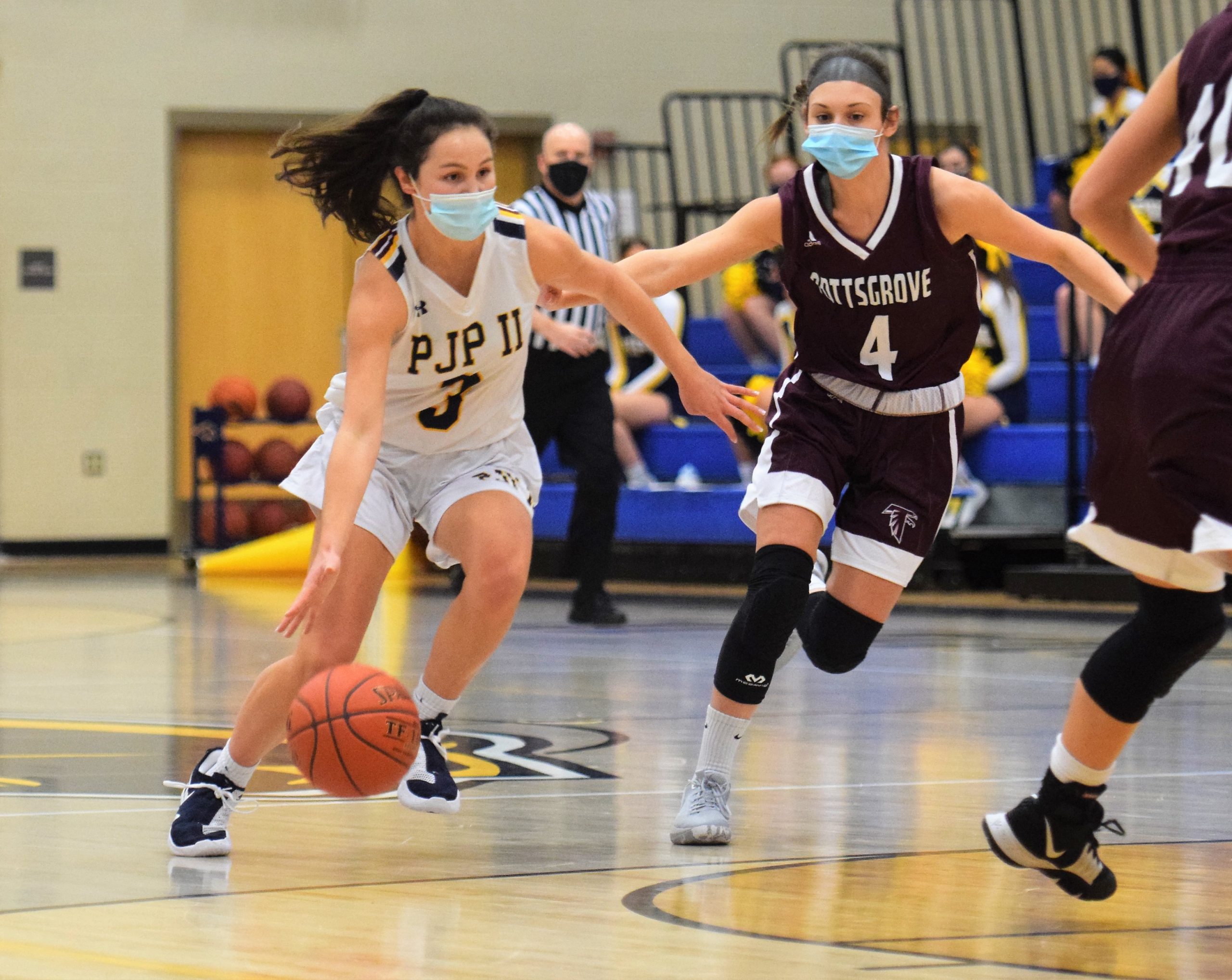 Everyone around area basketball has been eagerly anticipating the start of the season delayed by the COVID-19 pandemic.

But their wait has nothing on Kallan Bustynowicz.

While most players and coaches have experienced being sidelined by the season starting one month later than it traditionally would, the Pope John Paul II senior was sidelined considerably longer. Bustynowicz missed her entire junior year with a torn meniscus and double hamstring tear following a promising sophomore season.

The 5-10 forward’s return to the lineup was an early bright spot for the Golden Panthers in their season premiere Friday. Things were even brighter for them at the final buzzer as Pope John Paul II knocked off Pottsgrove, the reigning Pioneer Athletic Conference Frontier Division champion, 33-26 at Pope John Paul II. Pottsgrove had its 18-game Frontier Division winning streak snapped, a mark that dated back to Dec. 14, 2018 when PJP downed Grove 51-40.

“It was weird, but I’m more than happy to be back,” Bustynowicz said. “I stayed so disciplined with my physical therapy and stretching, icing, everything I can to get back out there. I feel good, it’s just the little things of getting back into it.”

She was with the Panthers every step of the way last season assuming something of a player-assistant coach role.

“It was fun because I got to see everything from a different angle,” she said. “Sitting on the bench you could see things that as a player you would never see. It’s different, but it was a cool experience to have.”

“She still always has advice for us and pushes us to keep being our best so nothing has changed,” said Crossan. Crossan, a three-year starter at point guard, looks to have gained some confidence getting to the rim since last season while proving to be the night’s most consistent scorer.

“I gained a certain level of confidence over the summer,” she said. “I was doing AAU and I played in a fall league and something just clicked in me. I realized not being confident wasn’t going to help me at all, that I am a good driver. I just have to know it in here (my mind) before I get on the court.”

The Falcons got six points apiece from Sierra Potts and Rachel Ludwig. Pottsgrove struggled on the offensive end after taking an 8-2 lead after one quarter. Its struggles from the floor were compounded by 6-for-15 free-throw shooting. PJP was 9-for-12 at the line.

“I think we had opportunities,” said Pottsgrove head coach Mike Brendlinger. “We got to the foul line but we didn’t make foul shots. We put them on the foul line at the end of the game and they made their shots.

“The people that were missing are normally good foul shooters. People I want at the line we had it the line, It was just one of those things where they don’t fall.” Pottsgrove is one of the most equipped teams to negotiate the delayed season and shortened, scrimmage-less preseason with an all-senior rotation, yet Brendlinger has lamented the lack of preparation time.

“The girls have been great. They work hard, but everything feels so rushed. We’re just not where we want to be,” Brendlinger said.

The Falcons started where they wanted to be, up 8-2 after a quarter, the notable moment coming when Potts blocked a PJP shot and hit a 3-pointer in the ensuing possession at the 1:31 mark.

“We were so excited early on. We were talking about getting out there for weeks and weeks and having those jitters and excitement, we just needed to chill, slow down and play our game,” said Bustynowicz.

PJP found its offense in the second quarter and took its first lead on a Bustynowicz driving layup for a 10-9 lead with 1:35 to halftime. PJP led 12-11 at the break. Pottsgrove regained the lead after three quarters, 21-20, getting five points from Jaimi Makins in the third.

The fourth quarter was all PJP. It matched Pottsgrove’s biggest lead by going up 28-22 on a Crossan driving layup with 2:21 left and kept their distance down the stretch.

Players are still growing accustomed to the face coverings while competing.

“It’s not the best, but it could have been worse,” Crossan said of how it was to wear a mask in a game for the first time. “It’s just like breathing your own air so it’s a little weird. We can get used to it; we’re just happy to be playing.” Reserves for Pope John Paul II and Pottsgrove, foreground, watch the game from the socially-distanced bench area during their game on Jan. 15. (Austin Hertzog – MediaNews Group)