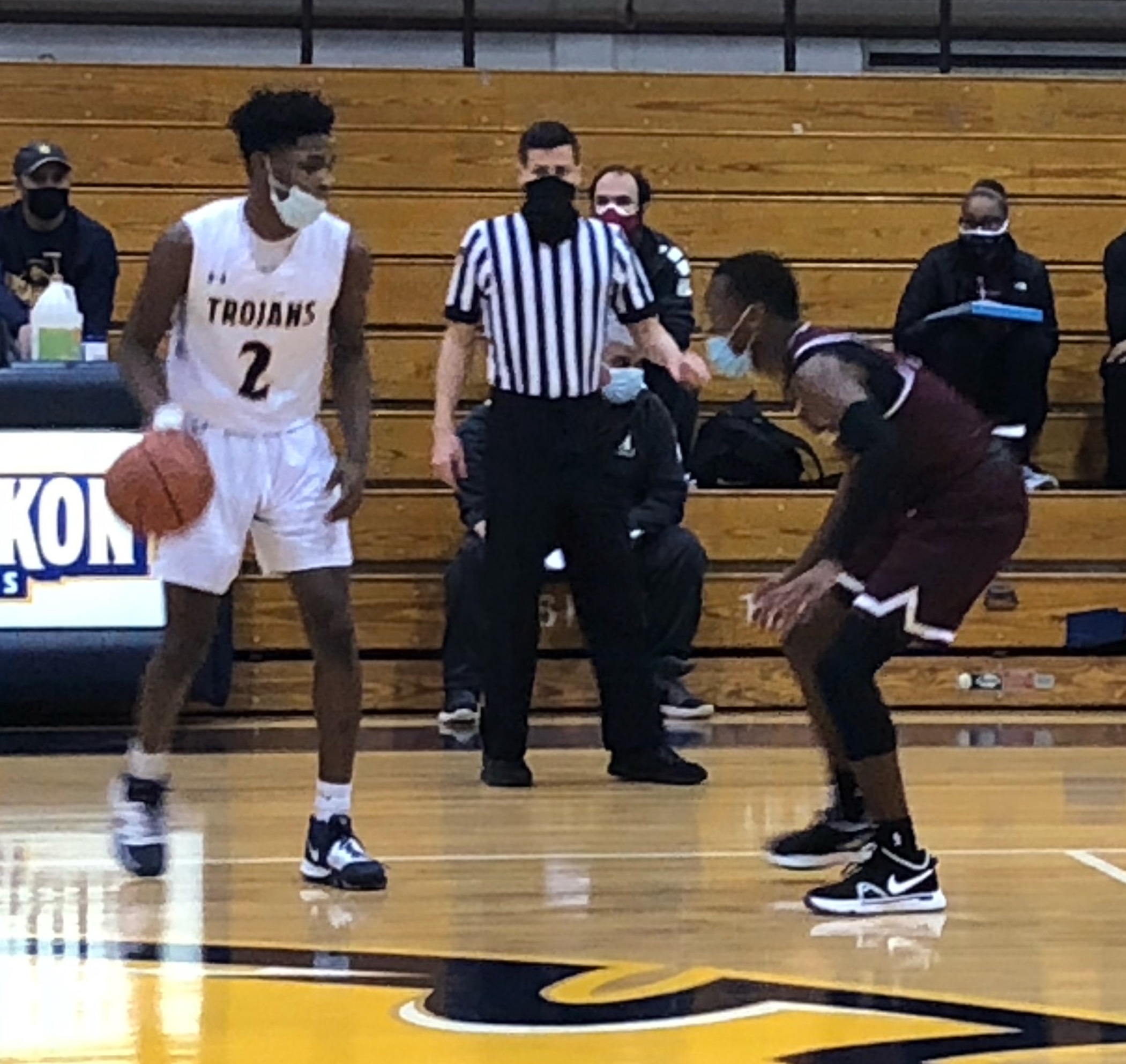 LOWER GWYNEDD >> Matt Compas is a potent scorer but he also knows when to give up the ball.

Twice during a pivotal third quarter run Friday night, the Wissahickon senior opted for a pass over a shot and both times, a teammate came through with a 3-pointer. That run, coupled with committed defense and a team-wide effort was the right mix to spoil Abington’s season opener.

The Trojans bottled up the Ghosts in the second half to claim a 51-38 victory in the SOL Liberty opener for both teams at Wissahickon.

“We just got after it, we knew it was a big game,” Compas said. “We prepped really well for it, coming in we were excited. It was a highly anticipated game and we wanted to come out strong.”

Compas was coming off an electric season debut where he posted 35 points in the Trojans’ win over Springfield Township but he knew the Ghosts’ defense would be keyed on slowing him down. Abington senior Rob Bell drew the defensive assignment and the two lead guards dueled through the first quarter as each scored six of their teams’ 10 points.

Abington leaned heavily on Bell and senior Oreck Frazier in the first half as the duo combined for 17 of the Ghosts’ 21 points at the break. Despite holding Compas to just one bucket in the second quarter, the Ghosts couldn’t pull away and went to the break tied when Wiss forward Stefan Lowry got a putback with 16 seconds remaining in the first half.

“There were some first-game jitters,” Abington assistant Gary Massey said. “The guys played hard for the most part. We had a lot of turnovers in the first half and only three in the second half, so I was pleased with that but I think we could have played harder.”

With Abington looking to capitalize at the rim, whether it was Bell going downhill on a drive or feeding the ball in to Harvard football-bound Frazier, Wiss coach Kyle Wilson knew cutting that would be the difference in the game. The Trojans leaned heavily on their 2-3 zone in the second half, trying to make the Ghosts an outside shooting team.

However, a defensive possession doesn’t end without a rebound and sometimes a zone limits a team’s ability to hit the glass. That wasn’t an issue for the Trojans, who got really strong games from Lowry (seven) and Josh Twersky (eight) snaring rebounds while Compas helped out with six boards.

“They’re a good team and athletic, so we tried to go off what we knew from last year,” Wilson said. “Bell is so tough when he gets downhill so we wanted to take good angles and not let him have an easy path to the basket and Frazier, he’s a man, so you have to move your feet and not let him get a full head of steam. If you give him space, he’s gone, so you plant your feet and hope he knocks you over.”

It took about 80 seconds for Wissahickon to break a close game open in the third quarter. Trailing 22-21, Twersky kicked the ball out to Morgan Wilson in the right corner for a three and the lead with 6:38 left in the frame.

After a stop, the Trojans went back to Wilson again. His first attempt was off, but the hosts grabbed an offensive rebound and recycled, with Wilson flipping corners and this time Compas found him on the left side for another trey.

Wissahickon buckled down again and as Abington turned its attention to Compas at the top of the key, he fired a pass to Jackson Intrieri on the right wing. Intrieri hit all cotton on his 3-pointer, capping the 9-0 lead with a 30-22 lead and an Abington timeout.

“That was one of the things that was disappointing for us in that the threes that they hit were uncontested,” Massey said. “They were wide-open and we talked about it as a team, we knew who the shooters were and a couple times, we didn’t locate those guys.”

Intrieri posted 16 points to lead Wissahickon and played an all-around solid game that included an assist on Twersky’s dagger three in the fourth quarter.

Abington recovered from the Trojans’ long-range run and cut the lead to 33-31 on a Bell trey with nine seconds left in the third. However, it was Lowry again scoring a clutch putback, beating the quarter horn for a four-point advantage going to the final period.

Compas scored on a tough drive to the rim making it 40-34 before Intrieri found Twersky in the left corner with 1:37 to go. From there, the Wissahickon zone held firm and the Trojans hit some foul shots, Intrieri broke free for a layup and Compas capped the win with a dunk.

“It was a good output by all of the guys for a nice, gritty win at home,” Wilson said. “Last year we started 0-5, so what a refreshing start being 2-0 out of the gate.”