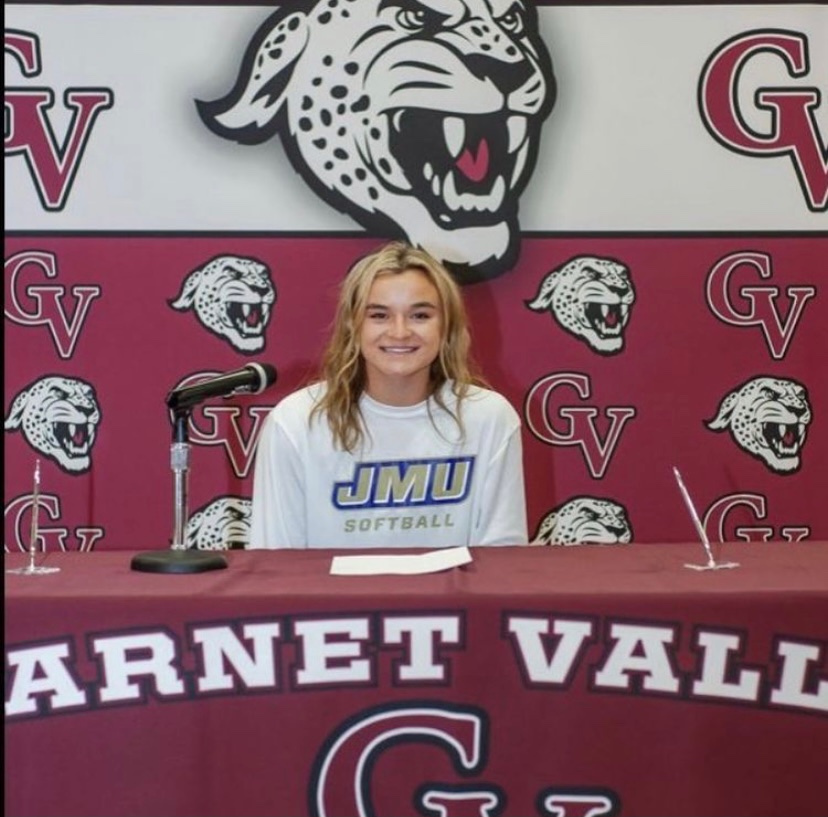 2016, Mesaros was on the elite 18-and-under team and being invited to Division I softball camps.

By the next year, when Mesaros was in the eighth grade, she received an offer from James Madison University and wasted no time in giving the five-time Colonial Athletic Association champion her verbal commitment.

Last November, the Garnet Valley senior finally made that official.

“It was a great feeling because I had been looking forward to it for almost four years,” Mesaros said. “It was so nice to finally do it, that this is definitely where I’m going, because JMU has been my dream for a while. It was an awesome feeling.

“I began the recruiting process early on, in the seventh grade, and I kind of knew what I was looking for but wasn’t completely sure. I went to visit a lot of schools and talked to a lot of coaches. And when I went to JMU, it was different from a lot of the schools that I had visited. The coaches are absolutely amazing. They’re so welcoming and they care about the girls themselves, rather than just the girls as softball players. The coaches care about them and how they are as people.”

Spending her early softball years playing up in age gave Mesaros the confidence to be a great player. At one time she was teammates with three-time Pennsylvania Gatorade Player of the Year and current San Diego State pitcher, Maggie Balint. According to ExtraInningSoftball.com, Mesaros is the No. 60th-ranked national prospect for the Class of 2021.

“Ever since I was younger, I worked with so many older girls and looked up to so many older girls,” she said. “It really developed me as a player early on. It’s such a family-like atmosphere throughout the Chaos program and they develop players really well.”

Mesaros went through her high school years fielding the same questions by friends and classmates about whether she regretted committing so soon. Because Mesaros is a nationally ranked talent, had she re-entered the recruiting pool at any point, any number of Division I programs could have targeted her to join their program.

But Mesaros was always content with her decision. Thrilled, in fact. She never had second thoughts about it. James Madison is and always was the place she wants to be, where she will pursue a degree in biology, and beginning in 2022, she will be an everyday starter for a softball team with a winning reputation.

“I totally knew. A lot of people have asked me that, too, like, ‘How can you be committed for so long?’ I tell them that I just knew,” she said. “It had everything I wanted softball wise and, on top of that, it’s just a great school that I would go to even if I wasn’t going to play softball.

“No school checked all my boxes like JMU did.”

Mesaros’ big brother, Mitchell, is a member of the Widener football team. So good young athletes certainly run in the Mesaros family.

Despite being a sought after recruit, as well as a star player for one of the nation’s top travel organizations, Mesaros has endured a lot of frustration during her high school career. Odd as it may seem, she’s yet to play a full season for Garnet Valley. Her freshman and sophomores campaigns essentially were cut in half due to injuries and her junior campaign was wiped out due to the coronavirus pandemic.

This spring, she expects to play every game and try to lead the Jags to a Central League title. Although injuries and the raging virus have thus far prevented her from making All-Delco first team, there is no doubt Mesaros has been one of the county’s premier high school-aged players the last four years. An injury-free season for Mesaros will make Garnet Valley a dangerous team in the state.

“I missed half of my freshman year and half of my sophomore year, then obviously I missed last year due to COVID. So, it’s definitely been tough, my high school career,” she said. “Whatever season we get in 2021, I’m going to do whatever I can to make sure we are prepared every day and play well. It’s been hard for me because, you know, every athlete wants to represent their school as much as they can and I haven’t really been able to do that as much as I would like to. But I’m hoping this season we at least have some games and we’re able to play well.”