CB West has plenty of energy in win over Pennsbury 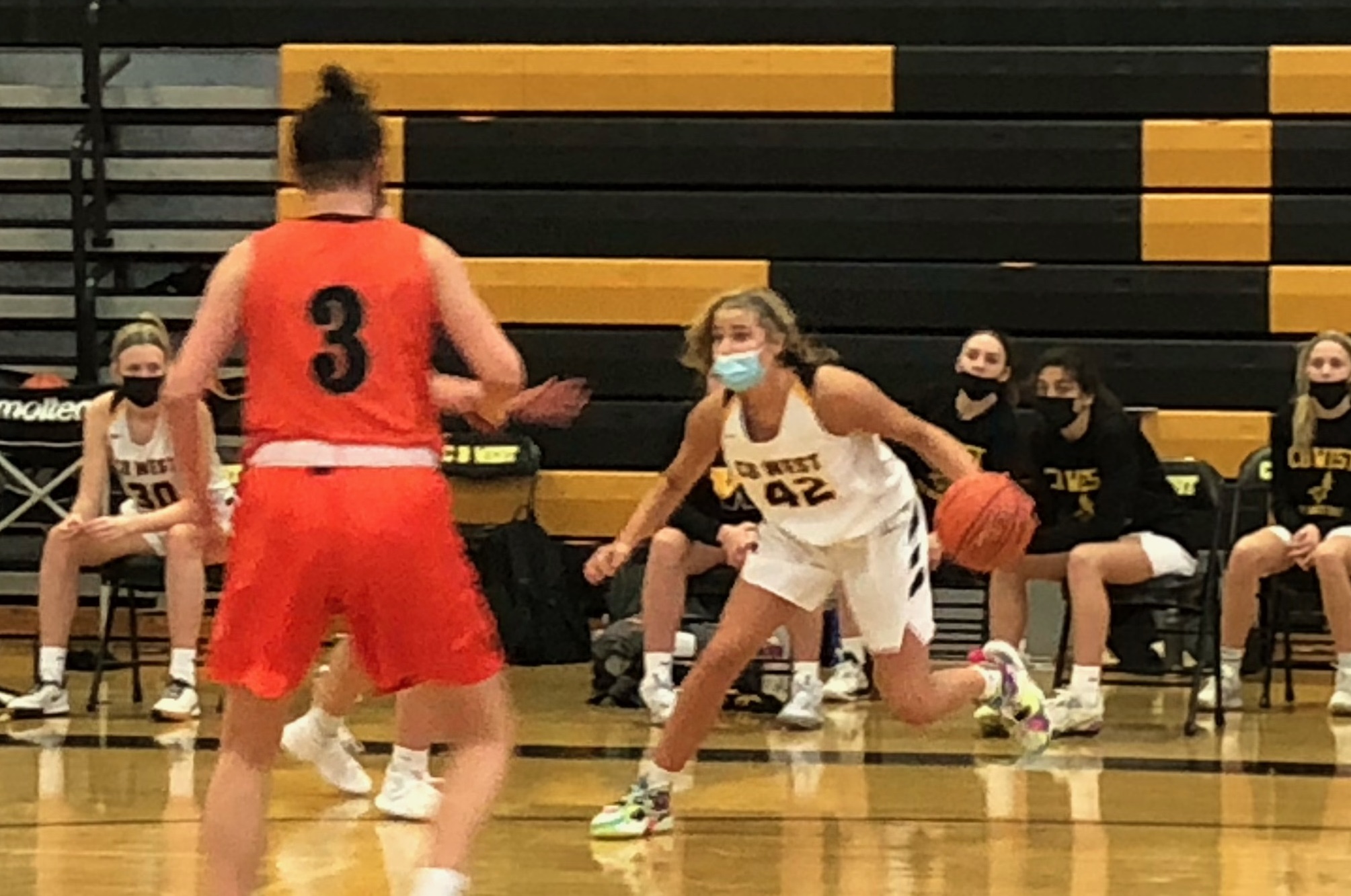 CB West's Paige Gilbert (42) looks for an opening in Pennsbury's defense during their game on Saturday, Jan. 16, 2021. (Andrew Robinson/MediaNews Group)

More than once on Saturday, the Central Bucks West senior threw herself after the ball trying to make something positive happen for her team. It wasn’t only Gilbert as energy and determination were in high supply from the Bucks, but also poise and calmness on offense.

Those factors all added up as West picked up its first win of the season, topping visiting Pennsbury 44-28 in a rematch of last year’s District 1-6A title game.

“We really wanted to redeem ourselves after losing (Friday night),” Gilbert said. “We have big shoes to fill, but we want to make the previous players proud and keep things going.”

The Bucks, who had to replace three starters including Pa. 6A Player of the Year Maddie Burke, weren’t happy about their performance in Friday’s 49-44 season opening loss against Central Bucks South. Knowing the Falcons were coming in off a difficult overtime division loss as well, West wanted to set the pace early.

Neither team started all that quickly, but once West senior Maggie McCusker drained a three to open the scoring, the Bucks slowly started to take control. A back-and-forth first quarter ended in a 9-9 tie when Pennsbury senior Bella Arcuri drilled a trey with three seconds left in the frame, but the West defense knew it was doing the right things.

“We didn’t want them to go on any runs like South did,” West junior Emily Spratt said. “Our focus was on defense but if they got a bucket, we wanted to get it back on offense.”

While the team’s individual defense was good, with Gilbert shadowing Pennsbury’s all-state junior Ava Sciolla, the key was in team defense. After playing the Falcons twice last year, the Bucks knew they’d have to match Pennsbury’s physicality but also use each other on defense.

“Our help defense was really good,” Gilbert said. “We communicated well, switched on screens, slid over on drives, things like that.”

Eight different players scored for the Bucks and they generated plenty of quality looks with their passing and off-ball movement. Even when shots weren’t falling, the next offensive trip saw West again work a few passes until it found an open shooter or player cutting toward the rim.

Playing from in front definitely helped, but the Bucks felt they played too fast on Friday and wanted to get back to a more team-oriented approach.

“We weren’t settling for bad shots,” McCusker, who had four assists, said. “We wanted the great shots; which meant making the extra pass. That’s kind of what we’re all about as a team.”

Spratt and senior Anna Blue paced the Bucks with 13 points each while Gilbert scored eight and ripped down 13 rebounds. The 5-foot-8 senior, a William & Mary recruit for lacrosse, grabbed several contested boards and on top of her defense, took a charge and made things happen with her hustle.

In the second quarter, Gilbert dove after a missed free throw, somehow saving the ball off the base line and finding Blue for a 3-pointer that gave West the lead for good. During the second half, the guard wasn’t able to come down with a rebound off the initial miss, but stuck with the play and ended up knocking the ball off a Pennsbury player to keep possession for her team.

“That’s a motor you can’t teach,” West coach Zach Sibel said. “You usually only get one or two, but to get all three of the energy, the effort and physicality isn’t common. I can’t wait to see her on a lacrosse field again because if this is her second sport, holy smokes what the first one must look like.”

West’s third quarter-ending run combined a little bit of everything the team did well on Saturday. Blue started it with a steal turned into a layup, Gilbert willed in a well-contested shot in the lane, Gilbert hit a three and McCusker made a great pass to a cutting Spratt to cap it off.

“It’s a lot of trusting each other and knowing everyone’s role on the team,” Gilbert said. “If each can person can do their specific thing, then we can all start to be comfortable doing more.”

Arcuri led the Falcons with a game-high 14 points and accrued three of her five steals in the fourth quarter but it wasn’t enough to spark a comeback. Sciolla tallied six points and nine rebounds for Pennsbury, which dropped its second straight game.

West, the defending district champion, isn’t a finished product yet but the Bucks felt they made steps forward on Saturday.

“We always say you can control your attitude and your effort and that’s what the girls were talking about this morning,” Sibel said. “We knew we had to get going early and keep that energy. We showed we can play with a lead against a good team and that’s going to help us down the road.”