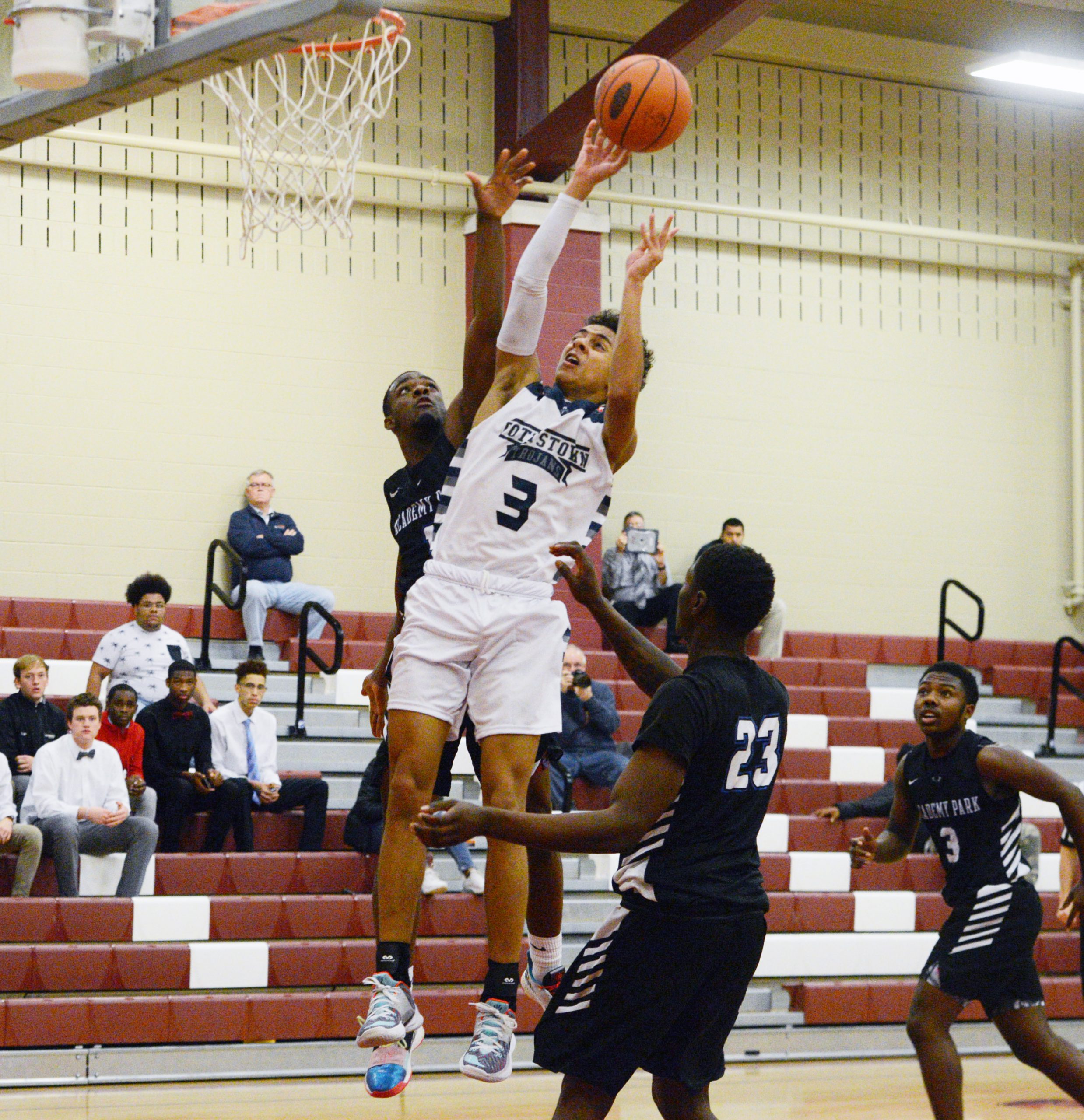 POTTSTOWN >> He made a name for himself this fall as the star runner for the Pottstown boys cross country squad.

This winter, Darius Smallwood is merging his skills in distance running — the ability to run a long stretch on often-uneven terrain at a steady pace — with those found on the basketball court. Friday evening at Pottstown High’s Strom Gymnasium, Smallwood showed his skills in finishing big after moving steady.

In helping the Trojans to a season-opening 43-38 victory over Upper Perkiomen, Smallwood sewed up

the win in this Pioneer Athletic Conference Frontier Division pairing at the foul line. The senior forward made three of six free throws inside the game’s final minute to put the game — Pottstown had a tenuous 40-38 lead with less than 1:20 remaining — out of the Indians’ reach. Ironically, Smallwood doesn’t consider that aspect of his game a slam-dunk, so to speak.

“Free throws aren’t my strength,” he admitted. “I missed it (a one-and-one) earlier, so I wanted to get it to redeem myself.”

That capper to a closing run of 15 unanswered points enabled Pottstown to overcome UP’s 38-28 advantage after Nick Aron (10 points) laid up a stolen ball and, drawing a foul, sank a free throw with 4:58 left in the game. The Tribe found itself unable to pad that spread down the stretch, getting no closer than Aron going to the line around the two-minute mark but unable to connect on a one-and-one.

“We let it slip and got into foul trouble,” UP head coach Brandon Hibbler said, a reference to his team’s 23 infractions and three players whistled a combined 14 times. “When you’re playing only seven and you’re a starter down, you can’t do that.”

Smallwood, finishing as Pottstown’s offensive leader with 12 points, got the stretch run going by making a layup before Terryce Phillips got the first of his five fourth-quarter points off a second-shot basket. A Corey Cottman three-point play and basket by Joneil Oister got the deficit down to a single point (38-37) before Phillips made the first of two free throws to knot the score.

The Trojans came up empty on their next three trips to the foul line, but Phillips got them back on track with a basket at 1:18. The final run was pleasing to head coach Scott Palladino, whose roster lists seven sophomores — Oister and Nyles Bunn-McNeil in the starting lineup — and one junior alongside seniors like Smallwood — runner-up in the District 1-AA race and The Mercury Male Cross Country Runner of the Year — and Jahzeel Watson (eight points).

“We’re playing a lot of young guys, but we’re not making excuses.” Palladino said. “We played better and got turnovers.”

Working through the recent three-week shutdown in December, Palladino and his staff tried to check in with the players but found it challenging.

“It’s hard to do around the holidays,” he said. “Families are doing all kinds of things. With no off-season, we’re going to be a work in progress.

With his team’s first game in the books, Hibbler expressed satisfaction with its defensive play. The Indians limited Pottstown to a combined 26 points through the first three quarters, and their offense used an 11-point run at the end of the third — a run capped by 3-point baskets from Adam Shaak (game-high 13 points) and Aron to reverse a 24-22 deficit into a 31-26 lead.

“We played good defense in holding them to about 40 points,” he said. “We have to get better on offense, spread the floor more. But we’re thankful to get the opportunity to play.”

NOTES >>To become acclimated to wearing a mask the entire game, Smallwood displayed a special plastic nose cover under his mask. He reported it being more comfortable than performing without it.

“We’re fighting through with the masks,” he said. “We try not to bring them down from our noses.”