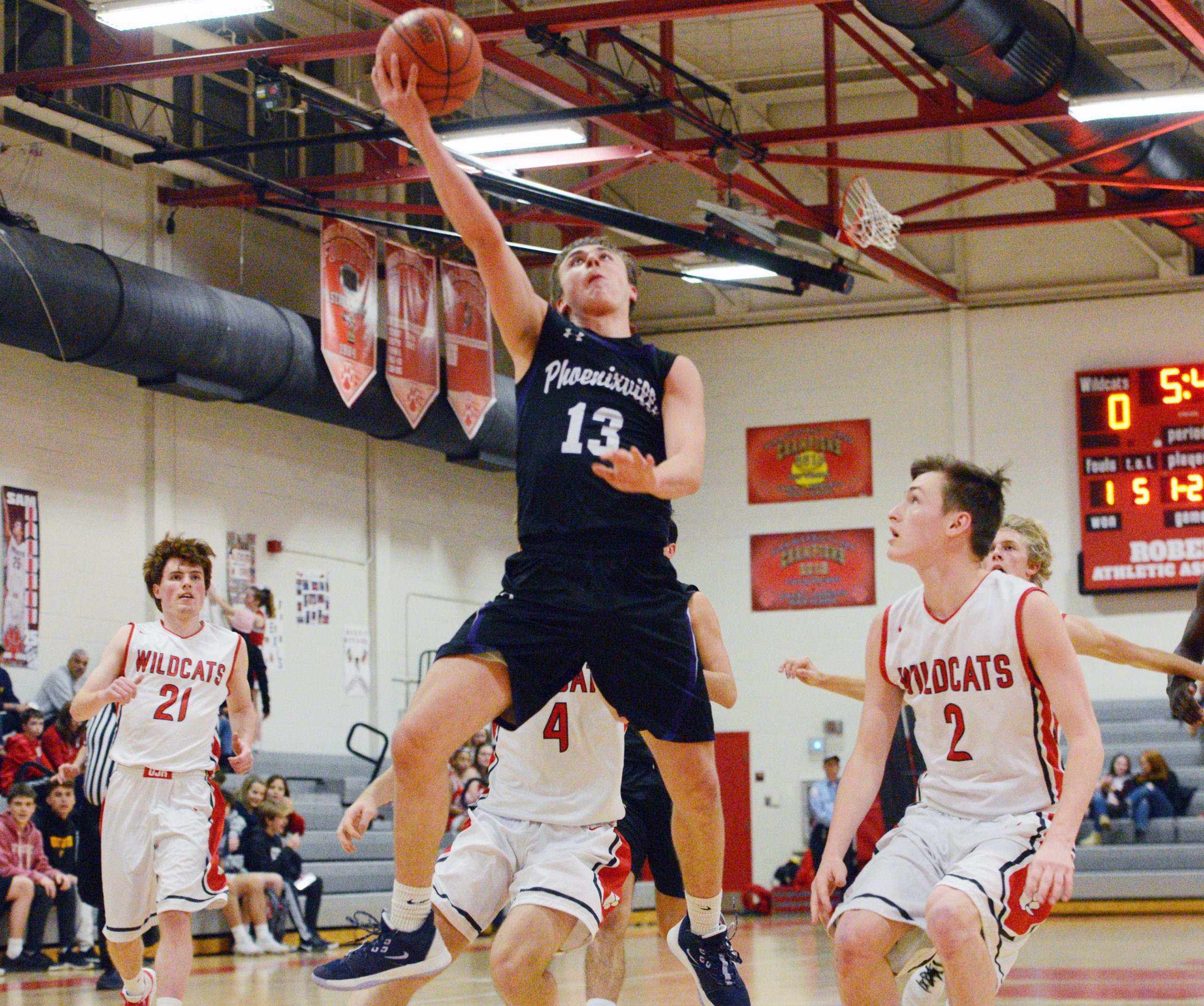 The Phantoms certainly checked that box, scoring the game’s first seven points and holding a nine-point lead at the end of the first quarter. They maintained a lead for the rest of the game and held off a late Upper Merion rally to pick up a 43-35 Pioneer Athletic Conference Frontier Division win Friday night at Phoenixville Area High School.

Mike Memmo was a key to the Phantoms (1-0) fast start. The 6-foot-4 senior scored nine of his game-high 12 points in the first quarter to give his side a comfortable lead.

“One of our goals in the locker room was set the tone,” he said. “We knew we had to do that. It’s a big game, division game, had to come out fast, couldn’t be slow, had to get a lead.

“I was excited to get out there and shoot the ball, they were falling for me. I was hustling for rebounds. It was working.”

Will Allain and Josh Warren each added baskets in the first quarter to help Phoenixville jump out to a 13-4 lead after eight minutes.

“Our number one key was set the tone,” Phoenixville coach Eric Burnett said. “Every player on my team knows that. We talked about setting the tone right away – managing first-game nerves and excitement and just setting the tone. It started with a really good JV game – those guys all practice together. JV started it and varsity came through and set the tone for a win.”

Upper Merion (0-1) trailed by multiple possessions most of the rest of the game, but never went away before making their run in the fourth quarter. The Vikings defense kept them in the game, forcing 10 second-half turnovers, while the offense was struggling to hit shots.

“That’s the kind of intensity we wanted from the start,” Upper Merion coach Jason Quenzer said. “That’s what we need to be our identity, especially early in games when shots aren’t going in. We need to be able to play that way and you saw how we got in transition off of it, too, getting down the floor. That’s how we can win some games, but unfortunately we didn’t do that early enough.”

The Vikings used a 10-1 run, keyed by six points from junior forward Kareem Abdussamad, in the middle of the fourth quarter to get within three, 37-34, with 2:20 left.

That’s as close as Upper Merion would get. Phoenixville closed out the game with a 6-1 run to win the season-opener, 43-35.

“We huddled up, talked and knew we had to knock down free throws at the end of the game,” Memmo, who went 3-for-4 from the charity stripe in the fourth quarter, said. “Don’t turnover the ball – we had a few jump passes that didn’t work. They had a good press we just had to beat it.”

“I’m proud of our guys,” Burnett, who credited Upper Merion for battling back in the fourth quarter, said. “Obviously we haven’t had any scrimmages or time to practice a lot of those types of situations. We have some inexperienced players mixed in with good experienced players and they handled it very well. A three-point game went to an eight-point game with some foul shots down the stretch. I’m happy with the way they responded to that big run Upper Merion went on.”

Memmo was the only Phantom to score in double figures. Dallas Maloney chipped in seven points and Jackson Brutsche and Warren each had six.

“We just didn’t play well enough to win a game from start to finish,” Quenzer said. “You saw the way we shot the ball and they were just letting them fly from the perimeter and they weren’t falling. I didn’t love the shots in the first half. I thought we were more aggressive in the second half. You just can’t sit back against a zone and let them sit there – you have to make them work and we didn’t do that. If the shots go in, maybe I’m talking a little different, but they didn’t.”