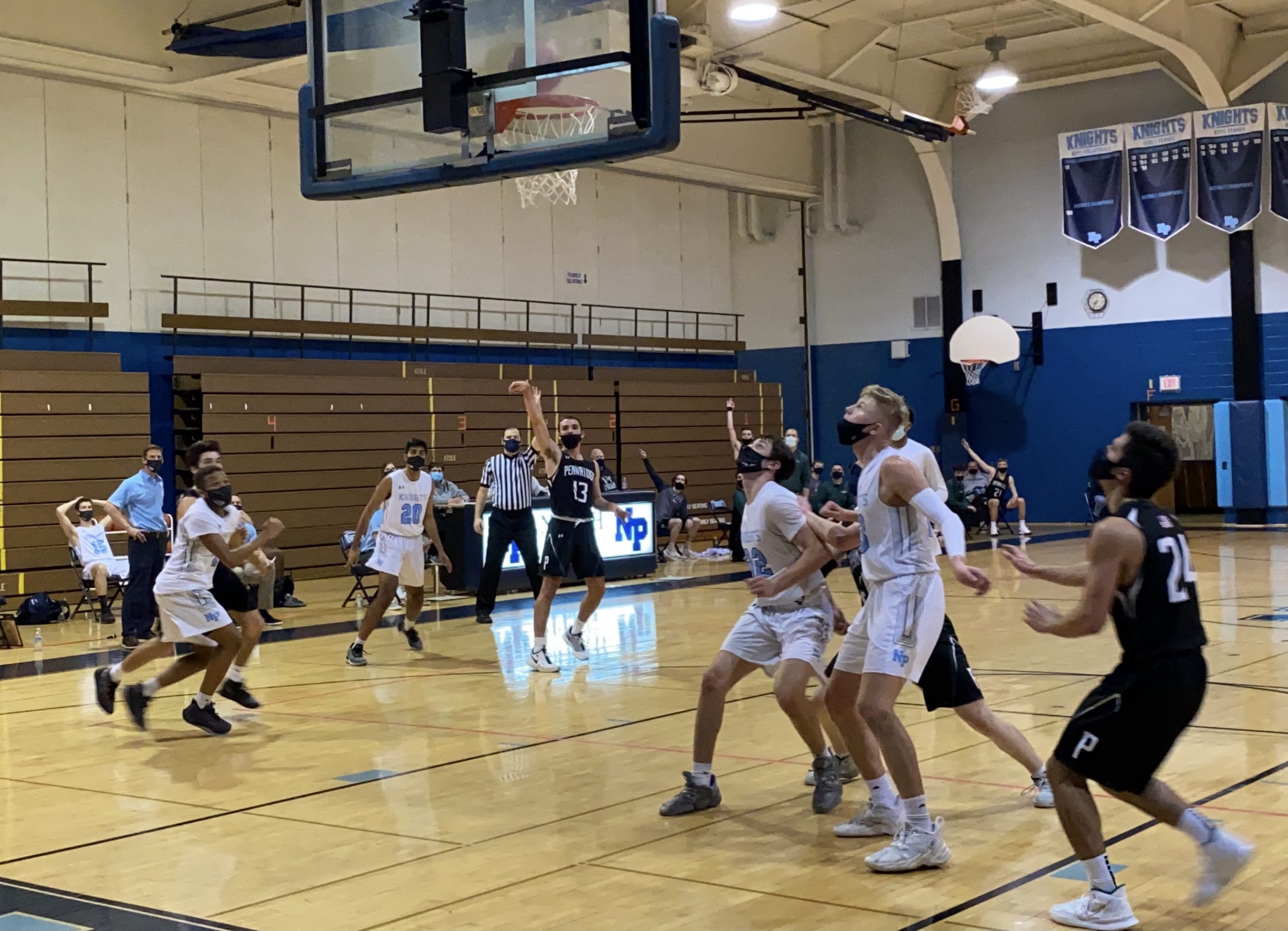 TOWAMENCIN >> A nine-point lead slipped away from the Pennridge boys basketball team late in the fourth quarter.

And when Colin Post’s shot to break a 52-52 tie in the final seconds of regulation hit off the front of the rim, it meant overtime with host North Penn Friday night.

But the senior guard and the rest of the Rams were not going to let those missed opportunities carry over and ruin their chances in the extra session.

“We’re still learning,” Post said. “I have to be better with the ball but I missed that shot and I was a little down on myself. But we got to the sideline and we all got together and we we’re like ‘You know what, we can get this win.’”

Pennridge got a two clutch 3-pointers from Greg Stumpo and Justin Nichols to build a 58-54 lead in OT then held on from there, overcoming a superb 34-point effort from the Knights’ Josh Jones to snap a two-game losing skid with a 64-56 SOL Colonial Division victory.

“I talked to some guys and I was like this is a must win because we don’t know how many games we’re going to play,” Post said. “So we really needed to win this cause you don’t want to be down two in the division.”

Post finished with a team-high 22 points for the Rams (2-2, 1-2 SOL Colonial), collected 13 of those in the second half after hitting a trio of threes before intermission. Luke Yoder added 11 of his 16 points in the first half while Nichols scored six of his 12 points in overtime.

Jones, meanwhile, scored 20 of his 34 after halftime and went to the foul line a total of 19 times (making 14) as the 6-foot-6 senior – a Louisville soccer commit – battling inside throughout the night trying to taking advantage of the shorter Rams lineup.

“We saw that I kind of had a little mismatch and I could use my height and length and they could throw that pass over,” Jones said. “We had turned it over a couple times in the beginning but then it started to work in the second half so we just kept at it.”

A steal by Mario Sgro led to Sgro’s three from the top of the arc that took a high bounce off the rim and dropping in, pulling the Knights within 51-48. Billy Coley connected on a three off a Joe Larkins assist and the Knights down just a point at 52-51 with 49.9 seconds left.

BOYS #BASKETBALL: @npknightsbball’s @joshjones023 scores inside & draws the foul 4Q vs. Pennridge. He made the free throw for the 3-point play. pic.twitter.com/yoyy2qLz4O

North Penn forced a turnover in the backcourt and on its ensuing possession Jones was by foul inside by Yoder for his fifth foul at 28.1 seconds. Jones made the first to knot the game at 52. After Pennridge grabbed the rebound off the miss on the second, Sgro poked the ball away but the Rams regained the ball and called time out at 22.5 seconds.

“We were sending three, four guys at him and he played really well,” said Post of Jones. ‘But we made some huge stops on him at the end, guys came and helped and pulled off the win.”

Off a sideline inbounds with nine seconds left, Post got into the lane and put up a jumper, but his try hit the front of the rim and the buzzer sounded with the teams still scrambling for the ball.

“We were definitely really pleased going into overtime,” Jones said. “We had some of the momentum after getting that last stop but we just couldn’t hit shots, they hit two big threes which kind of killed us a little bit and then we were just never able to really recover.”

Stumpo gave the Rams the lead for good with the first basket of OT, draining a trey from the left side off a Post pass from the right block.

“Greg was struggling early in the game but we kept telling him keep shooting with confidence cause he’s going to hit it eventually,” Post said. “Hit it at a huge time and it was great feeling as a tem to see him hit one.”

BOYS #BASKETBALL: @npknightsbball’s @joshjones023 scores inside & draws the foul 4Q vs. Pennridge. He made the free throw for the 3-point play. pic.twitter.com/yoyy2qLz4O

Jones scored off an offensive rebound to make it 55-54 but TJ Grenda drove into the lane then kicked out to Nichols for a three from the left wing and a 58-54 Rams lead.

Up 59-54, Pennridge missed the front end of a 1-and-1 with 37.5 seconds, allowing the Knights to pull within three when Jones hit two free throws at 25.7 seconds. However, Grenda made one-of-two at the line at 22.6 seconds to make it four-point game, North Penn came up empty and the Rams tacked on four more from the line.

“It feels great to finally get back at it, playing basketball,” Jones said. “It’s a little different with the mask but something’s better than nothing so we’re all very thankful that we’re playing.”

Pennridge’s next game is 7 p.m. Tuesday as the visit Central Bucks West for a division matchup.

“It feels amazing,” said Post of the season getting underway. “A lot of guys haven’t played a game since last high school season. A lot of guys’ AAUs got shut down so it feels great. We’ve been waiting so long. We got shut down for three weeks. It was hard getting on our feet at first cause we only had a couple practices but we’re still going to get a lot a lot better.”

The Knights jumped out to a quick 7-0 lead after a long two from Jones only for Pennridge to respond with a 10-2 run to grab a 10-9 lead after a Nichols free throw at 3:25 in the first quarter.

BOYS #BASKETBALL: @npknightsbball’s Mario Sgro with a steal then gets the friendly bounce to connect on a 3 from the top of the arc 4Q to pull the Knights within 51-48 4Q vs. Pennridge. pic.twitter.com/pOYgoNCVqB

A Jones basket off a give-and-go with Tehran Wright had NP up 13-11 but Jude D’Agostino’s three from the top the arc gave the Rams a 14-13 edge after the opening eight minutes.

The game stayed close in the second quarter – the period’s largest lead was just three, which came after a Jones reverse layup off a baseline drive made it 17-14 Knights.

A three from Post put the Rams ahead 26-24 but a pair of free throws from both Wright and Jones in the final minute had North Penn leading 28-26 at the break.

Four straight points from Jones had the Knights up 38-35 in the third but Yoder hit a jumper then found D’Agostino for a right corner trey to give Pennridge the 40-38 advantage after three.

Back-to-back buckets from Nichols and Post to open the fourth stretched the Rams’ spurt to 9-0 before Jones’ 3-point play made it 44-41 at 4:42. A basket inside from Post followed by a Nichols three had Pennridge up 49-41. Post gave the visitors their biggest lead at 51-42 before the Knights’ 10-1 run sent the contest to OT.