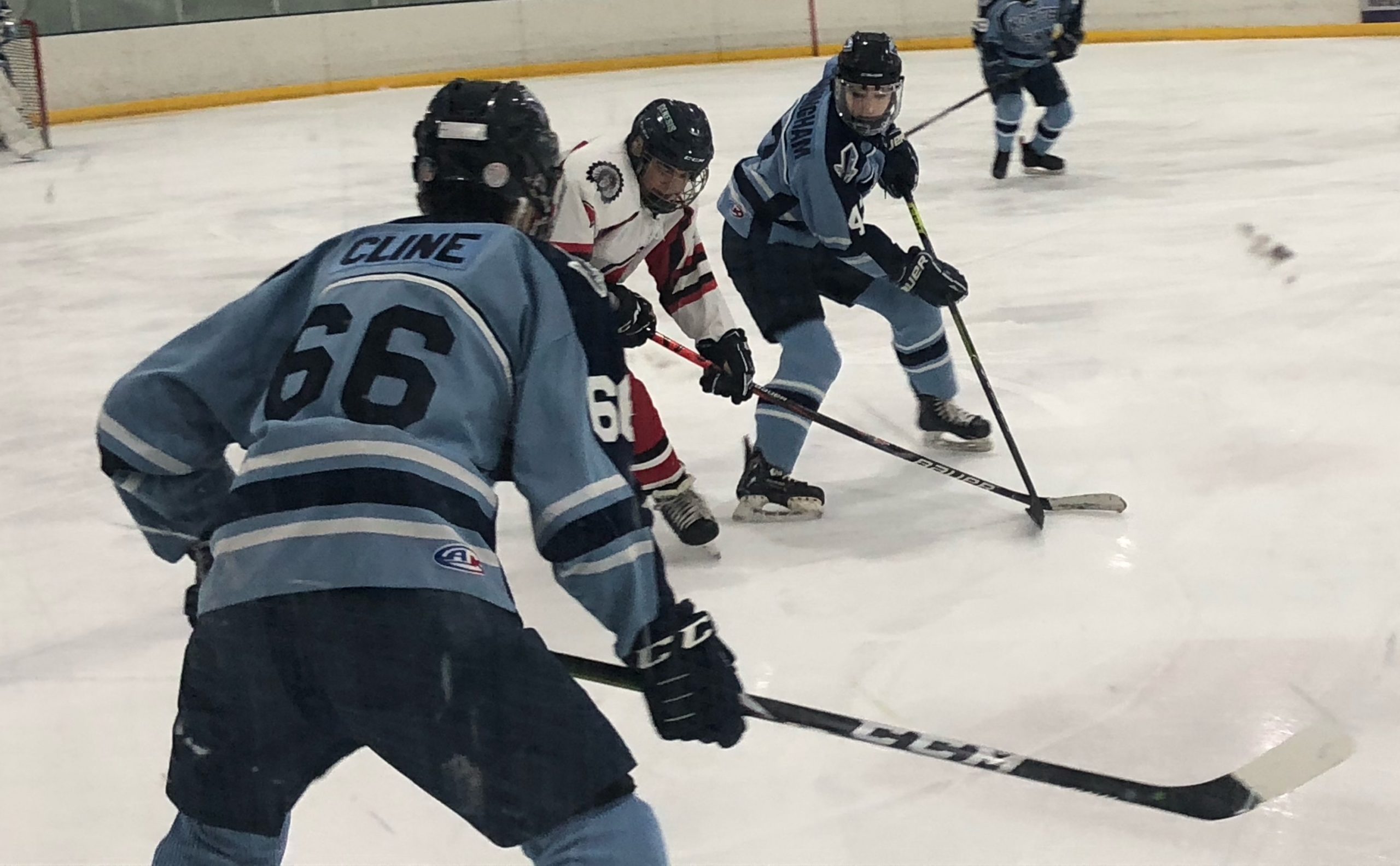 North Penn's Ryan Cunningham (47) and Zachery Cline (66) attempt to trap a Souderton skater and win the puck during their game on Thursday, Jan. 14, 2021. (Andrew Robinson/MediaNews Group)

HATFIELD TWP. >> North Penn certainly didn’t look like a team that had skated together just three times since the new year.

Making their season debut against Souderton on Thursday, the Knights looked quite sharp on both sides of the rink at Hatfield Ice. The puck moved, the shots came by the bushel and the defense limited opportunities in front of goal.

Eight players scored as North Penn topped Souderton 10-0 in the first night of SHSHL play for both programs.

“This has been a crazy season, practicing then not practicing so we’ve only been back on the ice three times,” Knights coach Kevin Vaitis said. “For our first game, winning 10-0 and putting up 48 shots, we did a lot of things well defensively; it’s all we can ask for.”

North Penn established control early and made it nearly one-way traffic going toward Souderton’s net as the Knights posted a 20-6 shot advantage in the first period. It still took a few minutes to actually cash in, but once Ryan Kaufhold’s wrister off a turnover found the back of the goal, the Knights were rolling.

Souderton spent most of the game on the defensive and didn’t generate a ton of offensive opportunities but goalie Amanda Kaminsky posted a convincing case for first star of the contest. The netminder turned away 38 shots and despite a continuous barrage, kept coming to her team’s aid with a bevy of stops.

“She played an unbelievable game,” Vaitis said. “She played well across all three periods and really kept them in it.”

North Penn extended its lead to 4-0 after the first period and put away any lingering doubt early in the second. With the Knights fighting off a power play, defenseman Ryan Cunningham picked off a pass at the Indians’ blue line, drifted in front of net and snapped home a short-handed goal for a 5-0 lead 30 seconds into the period.

Cunningham, who had a couple rockets denied by Kaminsky’s quick glove in the first, said it was a matter of improvising after the turnover.

Overall, the North Penn captain was pleased with his team’s performance in their season opener.

“It’d been probably nine or 10 months since we’ve played a high school game so it was nice to put on the school jersey again,” Cunningham said. “A lot of us play travel, so we had some extra skating and we put in the time and effort to do the running and extra workouts when we weren’t able to skate.”

Cunningham cited the team’s puck movement as well, although he felt there were a few too many instances of guys trying to do it all on their own. Still, the team’s energy was good and the Knights crashed the goal well as a group, getting two goals off rebounds.

Kaufhold and Jeremy Porubski each scored a pair of goals, but the Knights got plenty of contributions from a number of players. Tony Tuozzo had a goal and two assists, Cunningham added a helper, Chase Mueller and Zachary Cline each tallied a goal and assist while John Stinson and Joseph Silvotti each scored once.

“We got everybody involved and scoring across all three lines,” Vaitis said.

Defensively, the Knights were also quite sharp. The unit killed three Souderton power plays and held the Indians to six or less shots on goal in each period.

“We talk about trying to maintain seven shots or less in a period and we did that tonight,” Vaitis said. “We played strong in our own zone. We have to make sure we’re trying to improve every shift of every period and tonight was a great start for us.”

“We were having fun out there,” Cunningham said. “We had good spirits on the bench, stayed positive and enjoyed the game as we were playing it.”