Methacton kicks off PAC wrestling season with win over Phoenixville 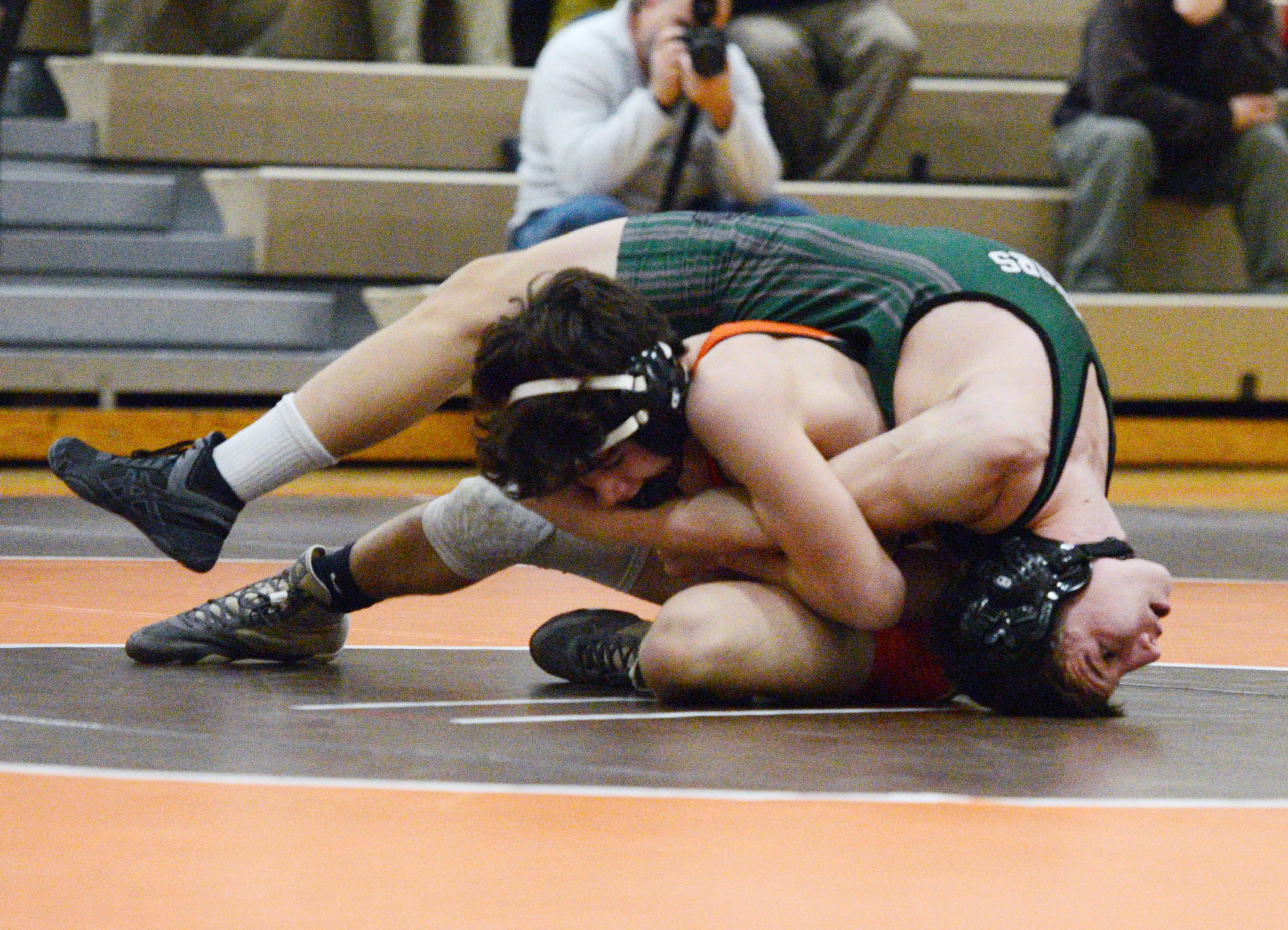 PHOENIXVILLE >> It was a different look for Mark Harner.

Accustomed to wearing Norristown blue for the past 16 seasons, Harner, befitting his new status as Methacton wrestling’s new head coach, was decked out in Warrior green for Thursday’s match with Phoenixville. He did it in style, a large part of his wardrobe sporting the color scheme.

Harner got his first win at Methacton in quick order, his team rolling to a 54-22 victory over the undermanned Phantoms. Bigger in his mind, though, was putting this non-divisional matchup of Pioneer Athletic Conference member schools in the scorebook.

“I was glad we got this one in,” Harner said, a reference to the 2021 mat season’s start being delayed by the COVID-19 pandemic.

While Methacton was able to put wrestlers in each lineup spot, Phoenixville ended up forfeiting seven weight classes. Though that situation made the Warriors’ team victory academic, the Phantoms were consoled by winning four of six contested duels, posting a 22-12 point edge.

“We’re grateful to be on the mat,” Phoenixville head coach Brandan Clark said, “With COVID concerns, we went from 25 kids to 12. So we want to keep positive.”

Forfeits in the first four bouts (215, 285, 106, 113) staked Methacton to an initial 24-point lead before Justin Meyers got Phoenixville on the board with a second-period pin at 120. Another pair of forfeits at 126 and 132 preceded Grant Baker’s match-clincher, the Warrior junior’s first-period fall at 138 upping his team’s lead to 42-6 with five weights left to be contested.

Phoenixville closed out the brief duel by taking three of the final bouts. John Volpe got a second-period pin at 145, and the card was closed out by Kael Gilbert beating the clock for a 5:56 drop at 189. In-between, Owen Koch posted a 17-5 major decision at 172, the night’s only pairing to go the entire six minutes.

At 152, Methacton’s Levi Borkowski had a first-period pin at 152 before Brody Borkowski accepted the seventh forfeit of the match at 160. Levi, a freshman, impressed Harner with his showing.

“He ran the (arm) bar really well, the right way,” Harner noted. “For young kids, it’s not that simple.”

One closely-watched aspect of the match had to do with mask wear by the wrestlers. It was a point of attention for both teams in their pre-season practices.

“It’s difficult,” Harner said. “Doing stuff in the room, and wrestle-offs, they have to reset the masks. They don’t want to stay on.

“It’s been harder with the masks on,” Baker added. “With our conditioning, we’re getting acclimated to them.”

Clark, in turn, has the Phoenixville wrestlers focusing on getting in wrestling shape as opposed to running.

NOTES >> Also accepting forfeits for Methacton were Joshua Cancro (215), Damian Moser (285), Joshua Retzlaff (106), Axavier Damavandi (113), Joey Simko (126) and Matthew D’Orsogna (132) … Prior to the match, a moment of silence was observed in memory of Barry Sankey. The well-known and well-liked sports editor/writer for the Evening Phoenix/Phoenix newspapers and The Mercury — among others — for more than four decades died Dec. 21 at age 66. … In keeping with COVID social distancing practices, no fans were allowed in the Phoenixville gym and the seats on both sides of the mat were spaced out in rows of three. The pre-match introductions and post-match interface between teams were also not done. … As a result of the numerous forfeits, the match was completed in approximately 40 minutes.