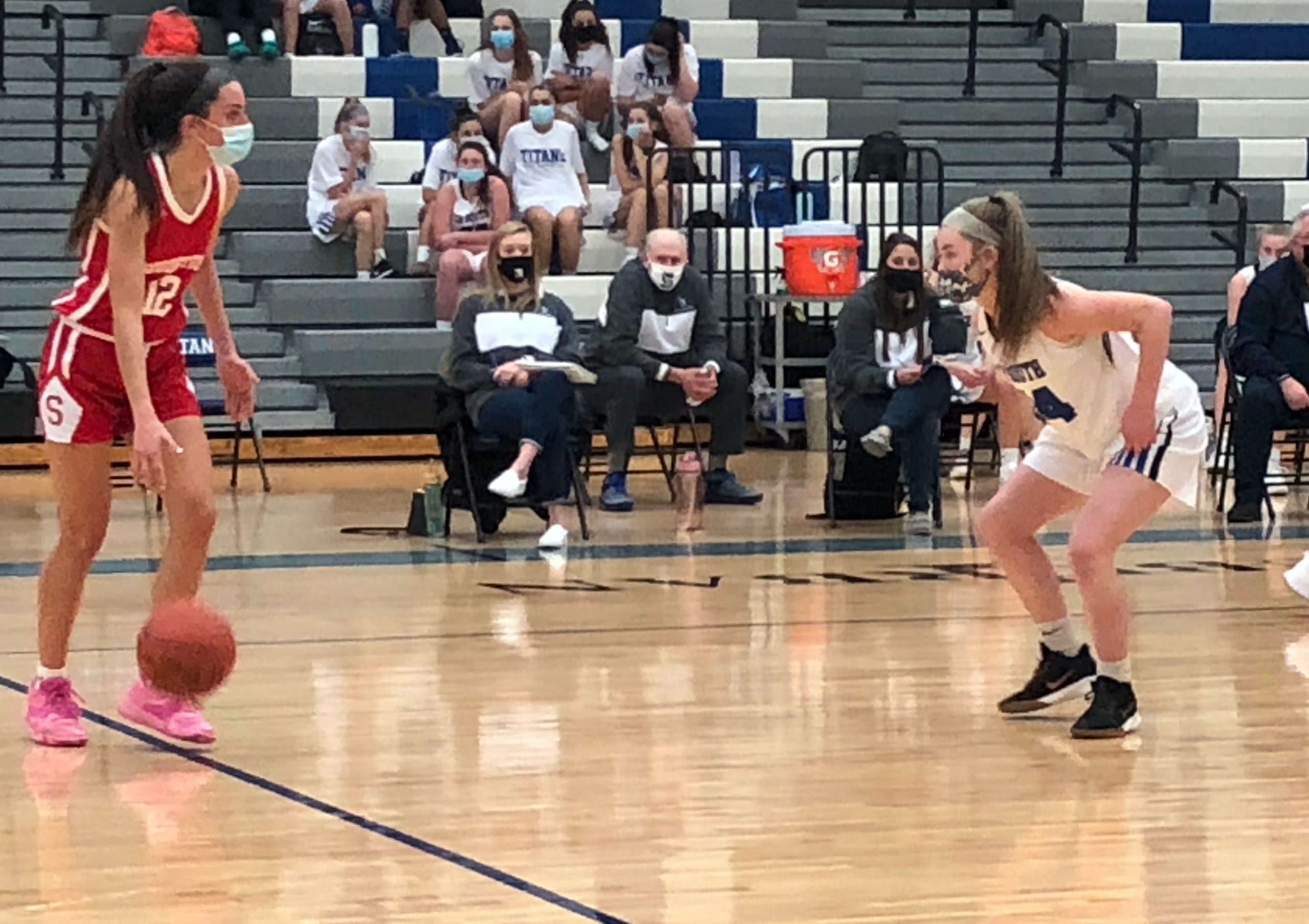 WARRINGTON >> Casey Harter’s legs felt like they wanted to give out under her, but she had enough for one last burst to the hoop.

Trailing by a point and fighting cramps in both legs and one foot, Harter ambled back on the floor late in overtime, waited for the right moment then surged down the lane for a layup. After a final look by CB South didn’t go at the buzzer, Harter and her teammates could enjoy a hard-earned season opening win.

Harter’s hoop with 7.1 left lifted Souderton to a 40-39 overtime win against the Titans on Tuesday.

“I was sitting there stretching my legs with about 30 seconds left, Erin (Bohmueller) got hurt and I had to go in,” Harter said. “We were planning to run a play and if things broke down, I would go in for a shot. There were 10 seconds left, I had to go, saw one of their girls but just kept going, stuck with my gut and it went in.”

Both teams showed signs of it not only being the season opener, but one coming off a couple shutdowns during the preseason. A slow start turned into quite a good finish however and the Titans showed a lot of resolve by putting together runs at two key junctures.

South, which missed out on the District 1 playoffs last season, had gone nearly a year since it last played so junior Taylor Hinkle said it was just good to be back on the floor. Hinkle, who scored a game-high 19 points, felt her team kept a positive energy throughout the contest.

“We kept our energy up and it’s a team sport, so we had to stay together,” Hinkle said. “If one of our teammates made a mistake, we just had to clap them on the hand, tell them to keep their head up and move on to the next play. It showed and reflected, we’ve been putting all that work into practice and it paid off.”

Harter, who paced Souderton with 12 points, gave the Indians a 10-8 lead after one on an end-to-end layup. The visitors would take a 19-13 lead midway through the second on Jordan Zimmerman’s free throws.

Souderton brings back four starters including Harter and Zimmerman, but the Indians are also relying on some new players to step into the rotation and contribute. Teya McConnaha, who got spot minutes last year, came up big for the Indians with eight points and 10 rebounds off the bench.

“We set the bar high and we want to keep going and know we can keep going,” Zimmerman said. “We have a lot of returning players but we also have a lot of new players. Michaela (Reese) was a big part of what we did last year but Teya and Mikayla (McGillian) filling her shoes, they did really well.”

Down six in the second, Mackenzie Erb and Hinkle strung together eight straight points to put the Titans up 21-19, but another last-minute bucket by Harter sent the teams to the break tied up. In the third quarter, Souderton built a 27-23 advantage but the Titans again put together a run to take a 29-27 advantage into the final frame.

“For 11 months off, it was a pretty competitive game that came down to the last shot,” South coach Beth Mattern said. “I was happy with our energy when we went on those couple runs and at times, I thought we looked pretty good. Other times, it wasn’t exactly how we wanted it go, but that’s why you keep working.”

A major focus for Souderton during the various shutdowns the last two months was conditioning and virtual workouts. The Indians even enlisted a couple of alums who know a lot about high-energy play in Tori Dowd and Alana Cardona to lead the current team through some workouts and the payoff showed in the extra period on Tuesday.

Zimmerman said she noticed a difference on a play where she fell down but was able to get a hand on the ball and force a tie-up call. Souderton also had plenty of hands on the ball during the game, blocking shots or chipping passes to disrupt the Titans.

“Our girls put in work during the shutdown,” Souderton coach Lynn Carroll said. “They were at it six days a week. You’re limited what you can do basketball-wise but they came in the gym last week and looked like they were in shape. You can’t get a team in shape in seven days but very few times did someone ask to be taken out and that’s a credit to them.”

The fourth quarter saw each team hit significant shots, with Zimmerman staking the Indians to a 33-32 lead on a short jumper and McConnaha extending the lead to 35-32 with 1:22 to play. Hinkle, who converted a traditional three-point play earlier in the quarter, stepped up again in the last minute of regulation.

Getting a step on a defender, Hinkle powered to the rim on a baseline drive, drawing contact and willing the shot in. The junior wing connected on the free throw and after each team got a defensive stop, the game went to extra time knotted 35-35.

“I wasn’t looking for it as much in the first half and didn’t see it as much but in the fourth quarter, I finally saw it,” Hinkle said. “I just tried to drive baseline a bunch and draw that foul on an opposite-hand finish. They had foul trouble so we kept driving and driving and we’re really good at foul shots.”

Harter cramped up with about two minutes left in overtime, putting the sophomore on the sideline and taking her defense off the court. Hinkle, who was shadowed by Harter much of the game, took advantage with 45 seconds left, taking another baseline drive and putting in her own miss for a 39-38 lead.

Souderton called a timeout with 32.3 left and once it ended, Harter came back out but clearly still fighting the cramps. With 12 seconds to go, Harter got the ball at the top of the arc, split a double team by putting the ball over her head before going off-glass for the finish.

Hinkle still managed to get off a good look, but her shot hit off the back iron at the buzzer to keep Souderton in front.

“There was a good chance she wasn’t going back in, she was probably still in some pain and she did that real minor thing of winning the game,” Carroll said of Harter.

“I’ve been working on driving,” Harter, who plays AAU with the Comets organization, said. “I noticed she was there but it didn’t look like she was going to step all the way in, so I moved the ball over out of the way and I was open.

“It’s really exciting, we’ve been working for I don’t even know how long hoping it would come. Our goal before the game was just to have fun and go play because we don’t know when it will be done.”