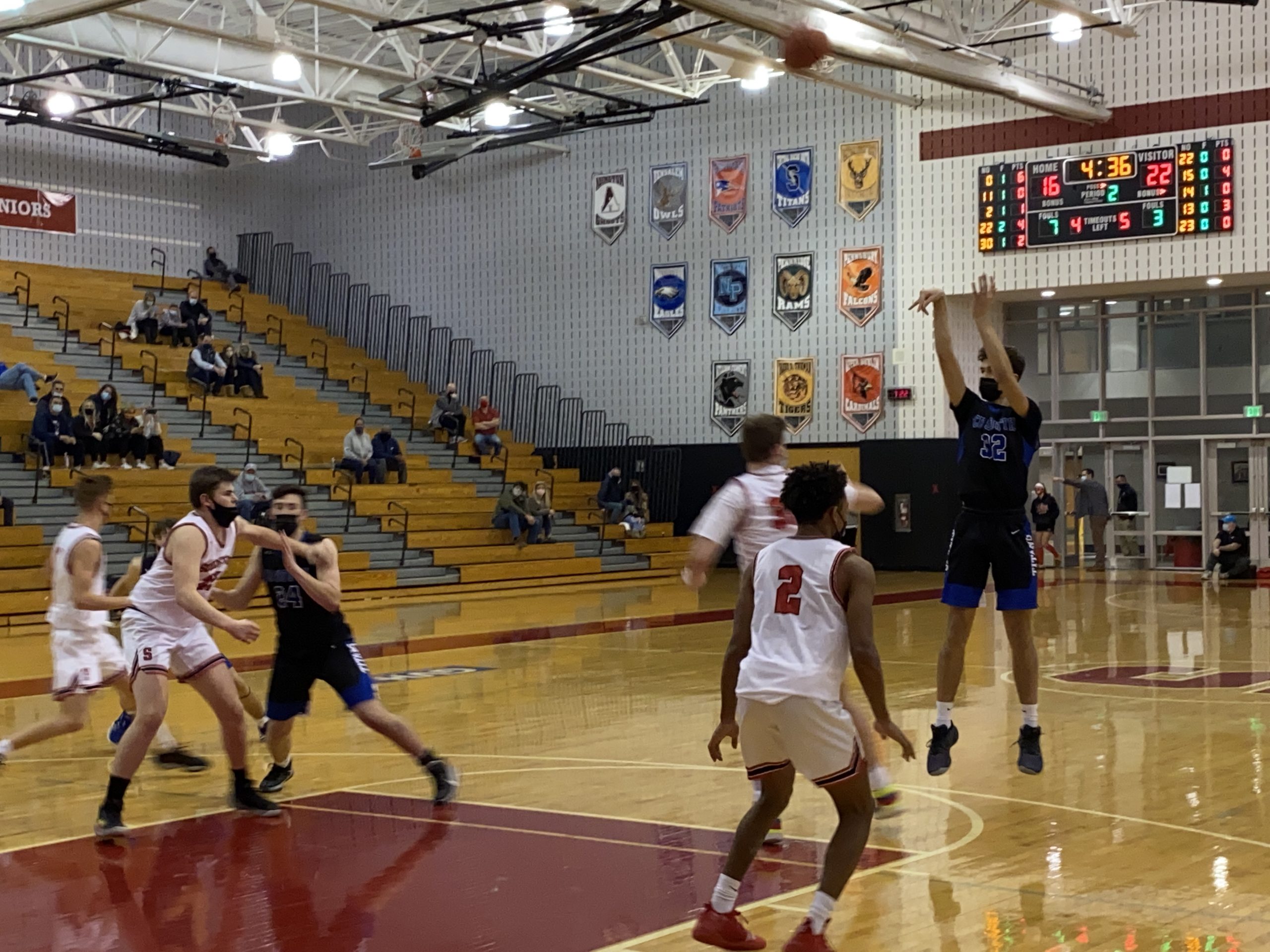 FRANCONIA >> Central Bucks South boys basketball coach Jason Campbell wanted to make sure his players took a moment Tuesday night to let the start of a season sink in.

The Titans then went about sinking their early looks from long range, knocking down four 3-pointers to end the first quarter against host Souderton with a 19-12 lead.

Tyler Meinel provided the offensive spark over the next eight minutes, the sophomore – playing in his first varsity game – scored 11 of his team-high 18 points in the period, helping to send South into the break ahead by 15. The Titans held off the Indians from there and earned a 62-43 SOL Colonial Division victory.

“It was definitely the threes that helped us open up, open up the middle for us,” Meinel said. “And we got easy looks off of that as well.”

It was the opener for both South and Souderton, with teams last Monday resuming practices after a three-week pause ordered by Gov. Tom Wolf with this week seeing Suburban One League sides finally getting regular seasons underway.

Souderton qualified for the District 1 tournament for the first time since 2015 last year but is light of experience this season. Evan Kutzler, one of just two seniors on the roster, paced Big Red with a game-high 19 points.

CB South never trailed in Tuesday’s contest, taking the lead for good on an Evan D’Orazio’s three that made it 7-4 in the opening quarter. Nate Macalindong’s triple had the Titans up 16-8 before four straight Souderton points cut the margin in half but a Jesse Rotunno corner three had South leading by seven after eight minutes of play.

“It was 4-for-5 from three-point range in that first quarter,” Campbell said. “And we had really good looks cause we moved ball around and we touched it in and touched it out.”

Kutzler connected on jumpers to twice pull Souderton within five early in the second quarter before Meinel put together a personal 6-0 run – a three-point play at 4:18 following by a two in transition giving the Titans their first double-digit lead at 27-16.

“Tyler was really solid and as a sophomore to come out and that’s your first career varsity game, that’s a heck of a game to have,” Campbell said. “Something he’ll never forget and I’m certainly never going to forget. I don’t remember the last time I had a sophomore that put up 18 points or so in a game.”

A Kutzler 3-pointer and James Blair free throw made it 27-20 only for South to answer with the next seven points – the last four by Farley to push the visitors’ advantage to 34-20.

Aleks Smith’s basket inside made it 34-22 but Meinel drained a three from the wing in the final seconds to make it a 15-point Titans lead at intermission.

Consecutive baskets by D’Orazio and Jay Macalindong to begin the third extended South’s lead to 19 but Souderton ripped off the next seven – a Chris Towsen three, two free throws from Smith and a Kutzler bucket getting Big Red within a dozen at 41-29.

“They did a good job of staying energized, staying together throughout the entire game,” said Brown of his team. “Coming back here, they’re all figuring it out and they’re going to stay together – they’re family, they’re brothers so we have faith that they’re going to do that. And most positive is they got a taste, they got a taste of what is really is. So that’s probably the biggest thing.”

But 12 was as close as Big Red could get while Colin Mauz’s corner 3-pointer gave South a 46-30 edge going into fourth. The Titans’ lead never dipped below 16 in the final quarter as got as large as 22 twice under two minutes.