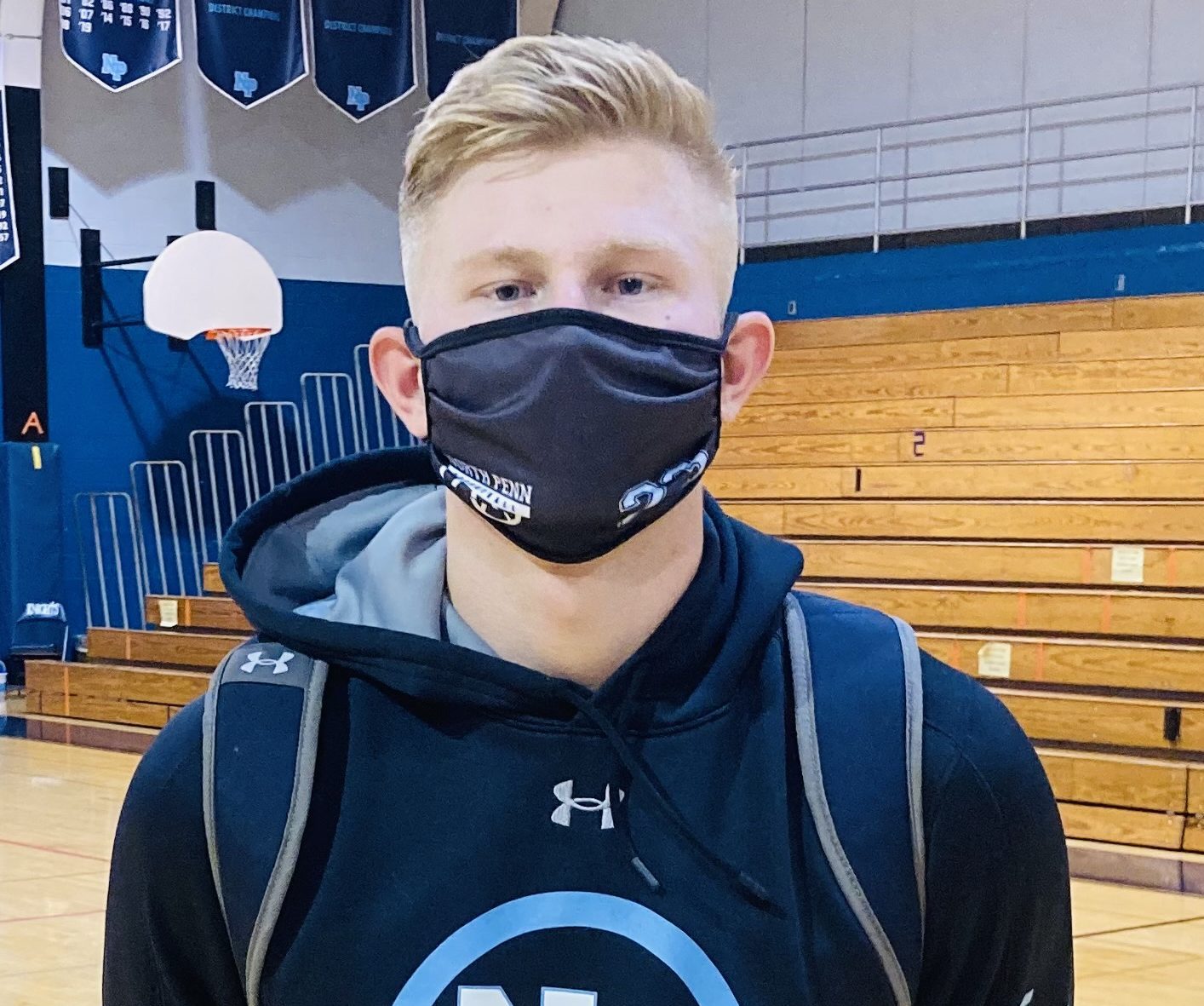 TOWAMENCIN >> The wait was over.

“We’ve all really been anticipating this first game and to come out here and get a win is the right way to start the season,” said North Penn senior Josh Jones. “We’re really proud of our effort tonight.”

Jones’ game-high 24 points led a determined Knights squad to a spirited 56-44 victory over rival Central Bucks West Tuesday night, as the two Suburban One League Colonial Division rivals finally got to open their seasons after a lengthy shutdown due to the pandemic.

The Knights’ 2020 season finished up pretty well, with a trip to states. Starting off better was the focus for 2021.

“Last year, we didn’t get off to the best start and we were pretty mad at ourselves,” Jones said. “This year, we wanted to get out on the right foot early and get that first win.”

The Knights led by as many as 16 in the first half and held off a CB West rally after the break. Larkins added 12 points for North Penn, with Ryan Zeltt adding nine. The Knights connected for six 3-pointers in the victory.

“We were able to spread them out,” Jones said. “They had to respect our shooting and then that opened up the lanes so we could drive more and dish down low.”

Taking control >> A Larkins three put North Penn in front in the opening moments and previewed the long-range shooting to come.

Three different players hit threes in the opening quarter for the Knights, including two by Larkins.

The second three by Larkins extended the margin to double digits at 17-6.

Said Jones: “I think we shot the ball really well off the start. Joe hit a couple threes, Billy hit a three, and I think I hit one too so we shot the ball pretty well in the first quarter.”

West tried to cut into the deficit in the second quarter, a three by Max Slaymaker bringing the Bucks within 19-12.

But it was almost all North Penn the rest of the first half.

In addition to the Knights’ outside shooting, NP’s transition game began to become a factor. Zeltt’s steal and layup put the Knights more firmly in front, and a fast-break bucket by Jones widened the gap further.

Larkins hit a pullup jumper in transition, and a three-point play by Jones helped make it 31-17 NP at the break.

Bucks come back >> CB West, led by John Lee’s 17 points, surged out of the gate to start the second half, with four points by Donte Mancini and a bucket by Teddy Spratt making things tighter.

West got as close as eight, but Jones played a pivotal role for the Knights.

Two key defensive rebounds by the senior prevented the Bucks from inching closer. At the other end, Jones drove and scored, finishing the three-point play to keep NP in control.

Jones would score six points in the quarter to help make it 40-32 Knights heading into the fourth.

The 6-foot-6 guard/forward was a towering, looming presence at both ends. His rebound in traffic and putback helped calm things for NP, making it a 46-38 lead with three minutes to play. He later finished off a fast break to shove this one into the win column.

“With the four seniors that we lost last year, I know I’m gonna have to step up and deliver in the clutch, provide more scoring,” Jones said. “I’m glad I was able to do that tonight.”