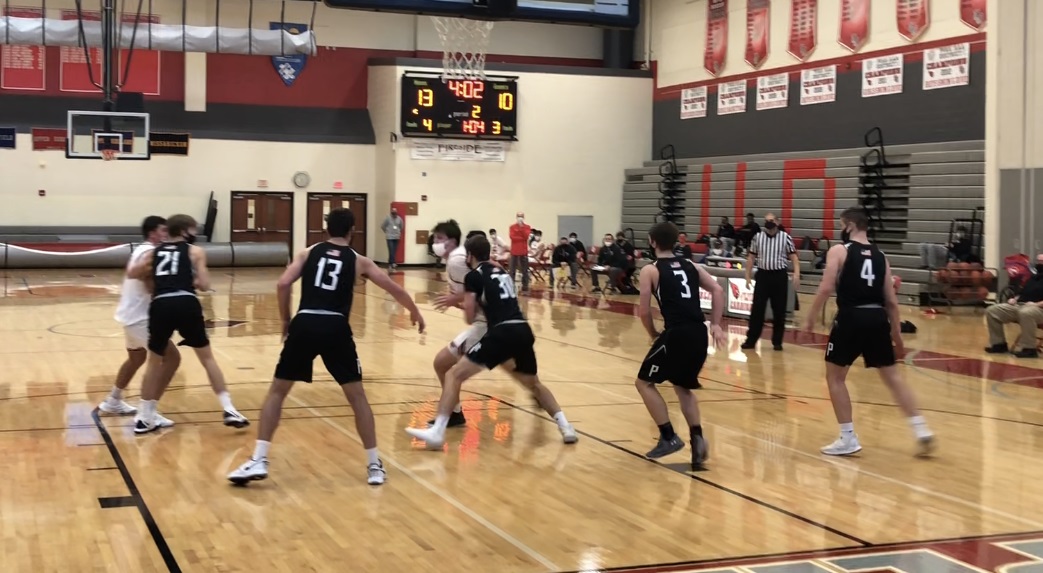 Upper Dublin's Drew Stover had plenty of attention from Pennridge's defense during their game on Saturday, Jan. 9, 2021. (Andrew Robinson/MediaNews Group)

UPPER DUBLIN >> All the good work Upper Dublin had done was in danger of slipping away.

A double-digit Cardinals lead had been erased as UD found itself locked in an overtime struggle with Pennridge. It was a moment Drew Stover had spent months preparing for and given the chance to deliver, he did just that for his team.

Behind 26 points from the senior center, Upper Dublin held off Pennridge for a 46-43 overtime season-opening victory Saturday afternoon.

“All summer long, especially with quarantine and COVID, I spent a lot of time at the local elementary school’s court working on my game,” Stover said. “I was getting shots up, getting up and down the court for conditioning, everything you could think of.”

Pennridge, which was coming off a quick turnaround following Friday night’s win over Quakertown, never led on Saturday but also didn’t fall apart after going down double-digits. The Rams fell behind 5-0 to start the game, but rallied to tie the game on three occasions and had a chance to force a second overtime, only for Colin Post’s 3-pointer to go in-and-out at the buzzer.

Rams coach Dean Behrens still took positives from the outcome, including the fact his team had the ball with 5.5 seconds left in regulation and a chance to win. The veteran coach felt it was a matter of effort, with the Rams showing more resolve after halftime.

“They came out and really hit us hard,” Behrens said. “We were down, I think 14 at one point and did anyone think we could tie this game? Probably not. But, we have the ball with six seconds left and got the last shot, I thought that was impressive.”

Certainly, going from a Friday night game to an 11 a.m. tip was a challenge for Pennridge, which had three players go at least 30 minutes against Upper Dublin after heavy minutes on Friday. That’s just something teams will have to contend with this winter as schedules will constantly be in flux.

“We owe the seniors at least, really the whole team, to play as much basketball as we can,” Behrens said. “We’re scrambling to find other teams, it’s frustrating but my job is to find as many games for these boys as possible so as long as we can keep playing, that’s what we’ll do.”

Stover tallied 10 points in the first half, then equaled that output in the third quarter as Upper Dublin built a 35-23 lead capped by a lob dunk from the senior. As the only player with significant varsity experience in the Cardinals program, Stover knows the team will go as he does.

“He’s going to get a lot of attention from the defense all year,” UD coach Chris Monahan said. “He gets fouled all the time but he’s so much bigger, they don’t give him the foul calls. He gets on probably half his shots and doesn’t always get the foul. He’s going to have to power through that and he did a good job of it today.”

Late in the third, Pennridge switched to a compact 2-3 zone that clogged the paint and kept no less than three bodies around Stover at all times. The defense’s effect didn’t really show until the fourth quarter, when the Rams held the hosts to just three points as they stormed back from the 12-point deficit.

Behrens said he probably should have changed defenses sooner, but liked the way his guys buckled down and got stops. Post, who went scoreless in the first half, scored nine points in the second half that included five in the final period.

Coupled with Luke Yoder, who led the Rams with 18 points, the Rams got within a score, got a stop then tied the game on Colin Monahan’s driving layup.

“No one wanted to come out of the game, they’ll compete,” Behrens said. “I was upset with the boys at halftime because I didn’t think we were playing with the passion that Pennridge basketball plays with but I felt in the second half and overtime, we did.”

Stover chalked the struggles in the fourth up to a mix of inexperience and first game rust. The center noted the ball wasn’t moving enough against Pennridge’s zone and guys were taking the first open shot they saw, which helped fuel the Rams’ comeback.

At the end of regulation, Monahan told his team to take a collect deep breath and focus back on what had worked prior to the fourth quarter.

“The game ends up being tied and everybody starts looking at each other,” Monahan said. “It was great we could say let’s get stops, let’s get good shots, we’ve done it for three quarters so we can do it for four minutes in the overtime. I was happy for them; it would have been tough losing that one.”

Stover, who connected on 11-of-16 shots, added seven rebounds, three assists and a block that came during a key juncture in the fourth quarter. Colin O’Sullivan didn’t score but tallied six assists including a helper on the go-ahead hoop in overtime.

“It was huge for the mentality, one thing we had over them was they were never in front,” Stover said. “The pressure was on them pretty much the whole game, so that puts them in the tougher situations.”