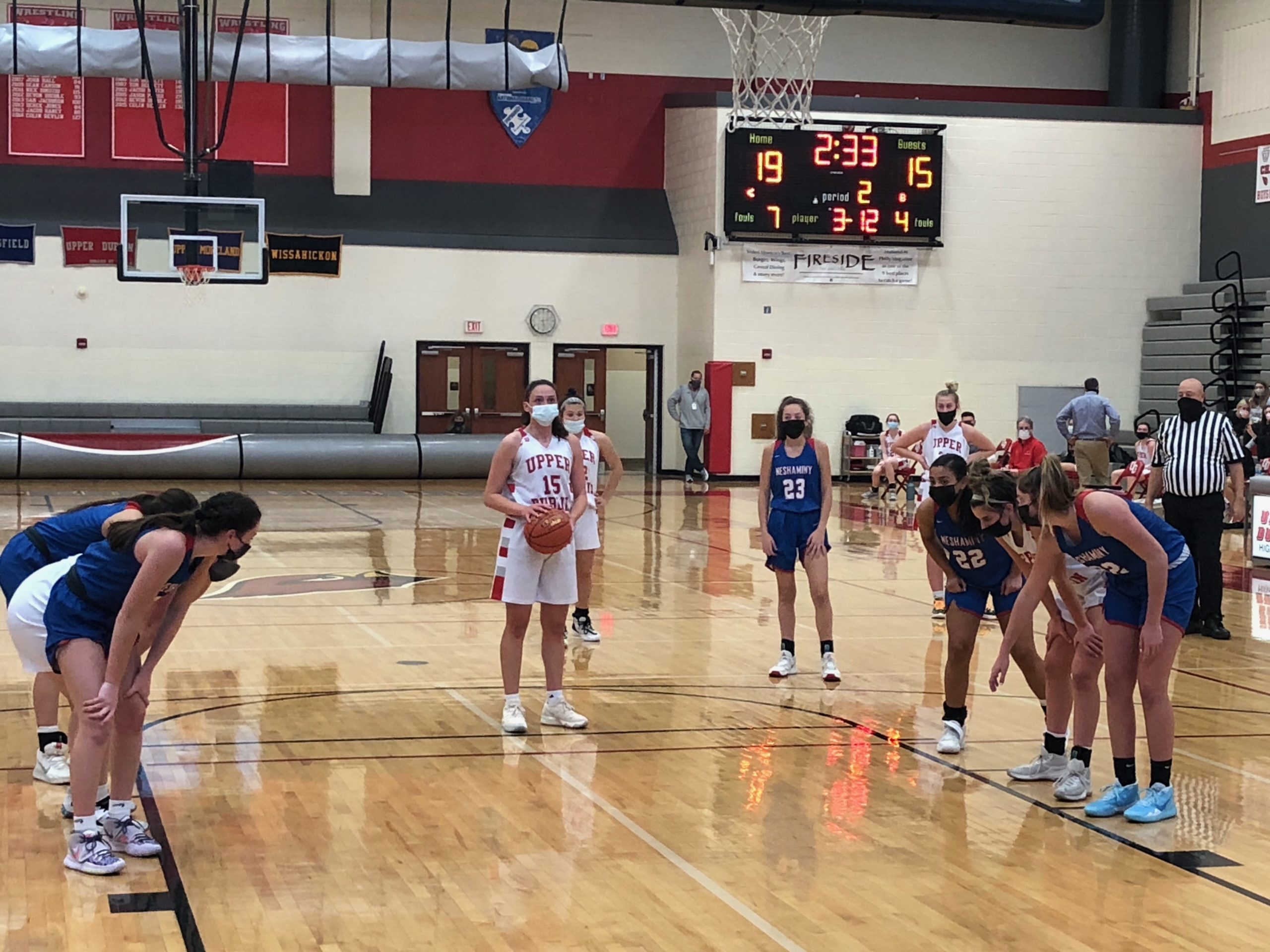 Upper Dublin's Jess Polin (15) lines up a free throw against Neshaminy during their game on Saturday, Jan. 9, 2021. (Andrew Robinson/MediaNews Group)

UPPER DUBLIN >> Jess Polin hasn’t needed to be Upper Dublin’s first option but it doesn’t mean she can’t take up the task if needed.

With her team struggling offensively in its season opener with Neshaminy on Saturday, the senior guard took over in a crucial stretch. Many things are different for UD this year but the Cardinals know what they have in Polin, even if she has to give out a few reminders.

An eight-point spurt in the second quarter and a game-high 12 points from Polin helped push Upper Dublin past Neshaminy 42-31 on Saturday.

“If I’m open, I’m always looking to shoot,” Polin said. “I know I’ve been considered a pass-first player in past years, but I’m always ready to shoot if I’m open and I’m just getting more comfortable from the outside.”

Saturday’s opener brought a new look for both teams. Neshaminy, with just one senior on its roster, is hoping to get a relatively young team up to speed quickly while Upper Dublin is replacing its top three frontcourt players from last year, including three-time Pa. first team all-state center Jackie Vargas.

Vargas, now at Lehigh, not only served as the keystone in Upper Dublin’s defense the prior four years but she and Anajae Smith and Kara Grebe helped the Cardinals control the glass and tempo offensively. Now a smaller, more-guard oriented team, the Cardinals needed time to adjust to their new reality.

“In the first half we didn’t rebound the ball all that well, but in the second half there was a noticeable difference,” UD coach Morgan Funsten said. “You can talk about it in practice all the time but until you play against real competition, that’s when you see the difference.”

Neshaminy got a nice debut from freshman Reese Zemitis, who scored 11 in her first varsity action. The lefty showed an outside shot and a good presence in the lane while sophomore Taylor Gurysh had seven points and senior Kacie Sienko hurt UD on the glass with nine rebounds.

GIRLS BASKETBALL: Upper Dublin's Rachel Bilger with a nice move to draw the and-one Q3 against Neshaminy
Bilger hit the FT for a 27-18 lead pic.twitter.com/vE18lu4EKk

“Overall, it was our effort, we have to work a little bit on our mental toughness, but that’s something to be optimistic about,” Neshaminy coach Joe Lally said. “Defensively, we gave up too many open shots they probably hit on a normal day, but we’ll take it for what it is and know it’s going to be a get better every day type of thing for us.”

Gurysh gave Neshaminy a 13-12 lead near the midpoint of the second quarter and the next trip down, Polin drove to the rim but missed a shot after taking a fair bit of contact on her way through the lane. That seemed to be the spark the senior needed, as she got a block on the defensive end before canning a pair of deep 3-pointers on consecutive possessions.

Following a Neshaminy hoop, Polin drove again and this time got the whistle and converted her freebies to end the 8-2 run with her team up 20-15.

“We were struggling shooting the ball all day, which is to be expected but those back-to-back threes were huge,” Funsten said. “Then she got to the foul line and hit both foul shots, she ended up with like eight points in a minute and a half and it helped settle us down a little bit.”

Polin said she just wanted to give her team a spark of energy and look to open up a close game. The co-captain felt it worked and after she gave UD a 24-18 lead early in the third, her teammates finished it off.

GIRLS BASKETBALL: @NeshGirlsHoops Reese Zemitis swishes a three a few steps beyond the line Q4 against Upper Dublin
The freshman led her team with 11 points pic.twitter.com/wG9mjkjmXG

A popular new analytic in basketball is the “screen assist,” which charts scores that were aided by a teammate screening for the scorer. Polin doesn’t chart them officially, but she was more than happy to point out teammate Rachel Bilger as a prolific screen-assister.

“She sets the best screens ever, I give her an assist every time I score when she sets a screen for me,” Polin said.

Bilger, a senior, made her first career start and scored five points including an and-one off a nice post move in the third.

Funsten credited the play of Bliss Brenner, who guarded Zemitis on defense and came up with three steals and senior Dayna Balasa, who powered through a rough shooting game to help the team’s rebounding effort with six boards.

“The number one thing is we’re actually able to play games,” Funsten said. “Everybody was excited to come back today. We tried some things defensively and got back a little more to what we’re used to.”

GIRLS BASKETBALL: Upper Dublin's @PolinJess with a great pass to the cutting Rachel Bilger for a Q1 basket against Neshaminy pic.twitter.com/NSPZNeoxZs

Things may be different for Upper Dublin this season but all that matters to the team’s seniors like Polin, Balasa, Sarah Eskew and Bilger is the fact they’re playing. Polin noted any game could be their last one, so they’ll do what it takes to keep going.

“It’s honestly been a lot of fun,” Polin said. “The game is more uptempo now without a true big, so we get to push the tempo, we can press, we run off pick-and-rolls. It was hard getting used to it, but I think we’re starting to pick it up.”

Stover, Upper Dublin hold off Pennridge in overtime
No longer an underdog, Ridley looks to repeat as Central League champs