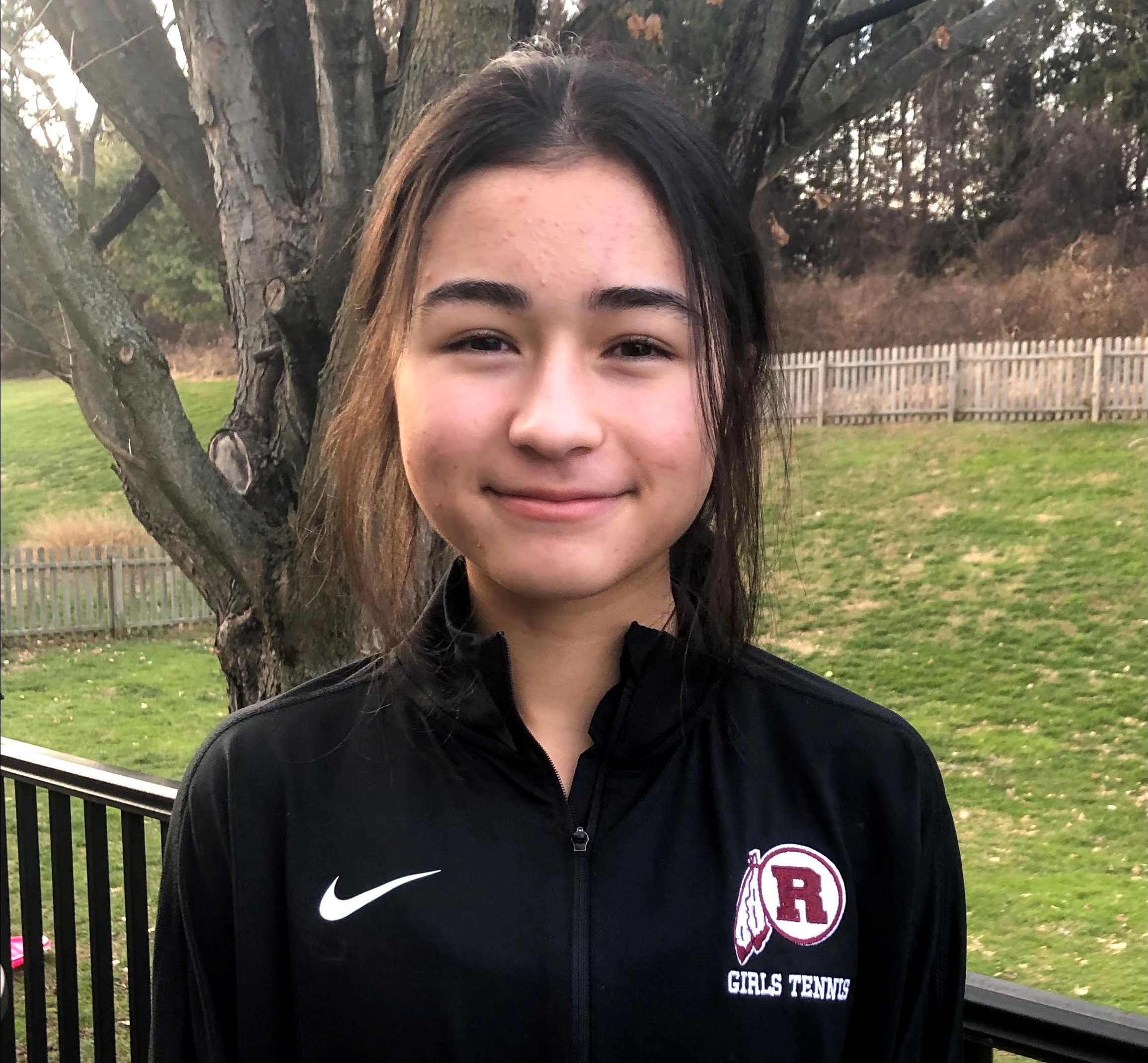 Q: Your favorite memory of the Radnor 2020 girls’ tennis season was the Raiders’ first match of the season, against Conestoga. Tell us a little about that experience.

A: Knowing that I was going to be playing someone very good, I was pretty nervous at first, but after a couple games I started to feel more confident and calmed down a bit. My match was one of the final ones, so everyone was watching from the sides and that only made me even more nervous. However, I ended up winning in one of the closest matches I’ve ever played.

Q: You mentioned that the Conestoga match was your best match of the fall 2020 season. What was the biggest key to your success?

A: I started off by winning the first set comfortably, but after losing the second set, I knew I had to change something about my game to win the tiebreaker. My key to success in the third set was being able to switch between playing aggressively and defensively. This allowed me to cope with the situation, and win that match.

Q: Tell us a little about the biggest challenge you faced during the first 6 months of the COVID-19 pandemic regarding keeping your game in shape, and how you dealt with that challenge.

A: During the months of the stay-at-home-order, one of the biggest challenges I faced was finding somewhere to play and figuring out different ways to stay in shape. I ended up going for long runs and doing at-home workouts frequently, but because none of the courts were open, I was forced to hit against a wall for a couple months. This definitely slowed down my progress as a tennis player, but as soon as I got back to playing on the courts, I felt better about my game.

A: At the moment, I feel that the strongest part of my game is my serve and my forehand, and these things helped me in difficult situations in my matches. Lately I have been working on my net game and my backhand with my coach.

Q: Tell us a little about Kanon’s influence on your tennis game.

A: Kanon’s game is very different from mine, and I get told that a lot especially by Coach Pat [Radnor head coach Pay Kurz]. She plays a little more aggressively than I do, and I want to do that more in my game as well. There are some things like her serve and forehand that I try to pick some things up from, but other than that, I like my playing style and want to make it different from other players.

A: Some of my favorite tennis players include Sofia Kenin and Dominic Thiem. I like how they are able to play every style from defensive to aggressive and I really like their mindset and mentality on and off the court, so I try to mimic some of the things they do.

Q: You started playing tennis at about age 4. Who have been your top tennis mentors, and what was the most important thing you learned from each of them?

A: My current coach, Margarita Sadovnikova from UNLTD, has helped me improve my game so much and has made me a mentally and physically stronger player overall. And I can’t forget Coach Pat, who has encouraged me a lot on the court to give everything I have.

Q: Tell us a little about your pre-match preparation the day of a match.

A: Usually, on the day of a match, I will try to wake up early and eat some good food to fill me up and I will drink lots of water. Then, I try to stretch and will either go for a walk or a light jog to warm up.

Q: What is your favorite course at Radnor?

A: My favorite course would be art even though I’m not the best, but I find it to be very relaxing and fun. There aren’t many options for courses as a freshman, but I would like to take business related courses in the next couple years and take that experience with me to college.