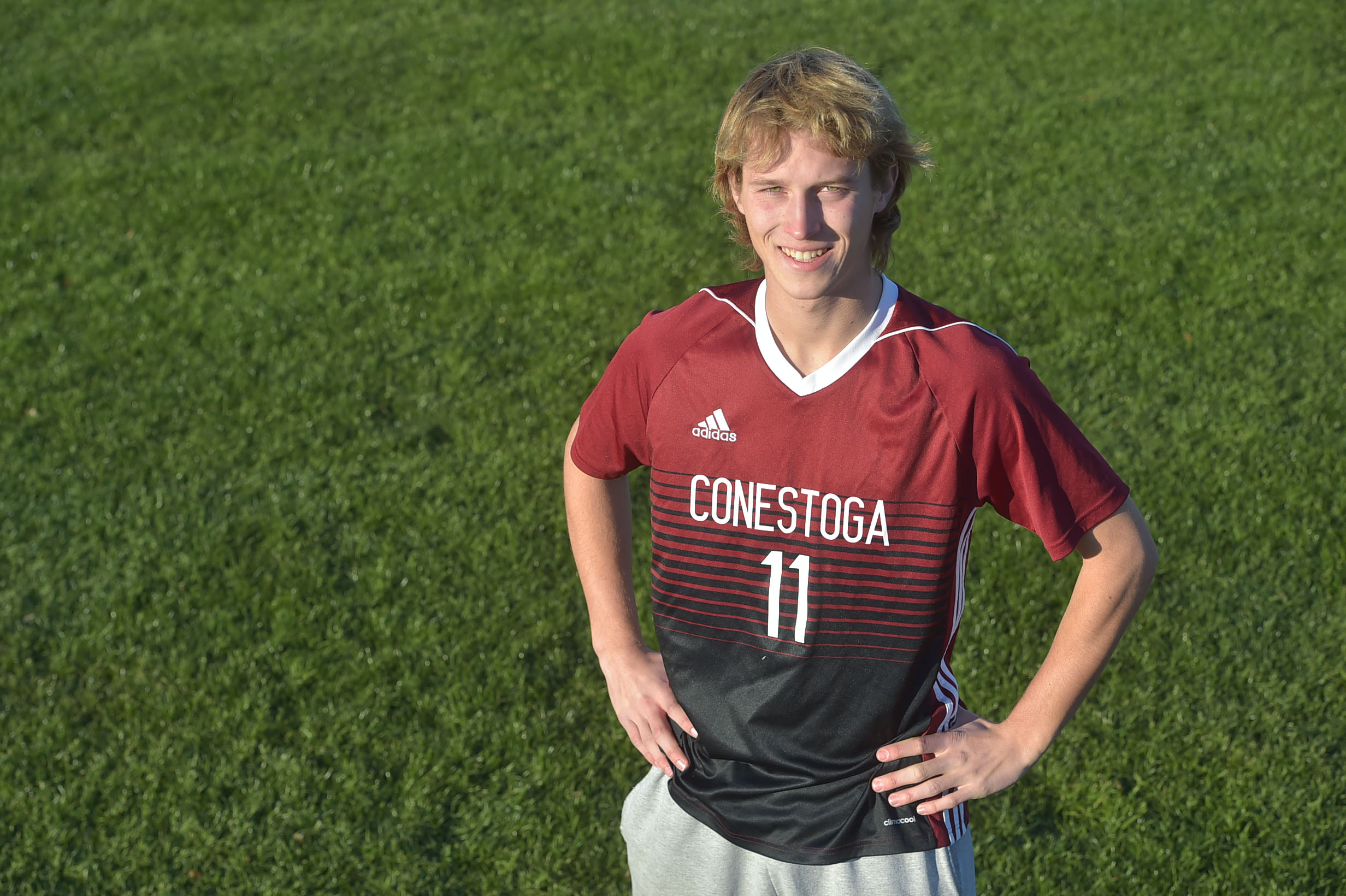 Virtually all of the local high school soccer players were thrilled that the 2020 season actually took place, but nobody seized the opportunity more than Conestoga’s Tyson Burling.

A solid but unspectacular performer as a junior, Burling put together a remarkable senior campaign, and the Devon resident is now garnering all sorts of postseason accolades — including All-Area Player of the Year honors from the Daily Local News.

“If I’m honest, I would not have necessarily predicted the season he had,” said ’Stoga head coach Dave Zimmerman. “It was a pleasant surprise that he played so well.”

While others were lamenting a shortened season staged during a global pandemic, Burling was excelling. The left winger poured in an area-best 15 goals in just 14 outings, and helped lead the Pioneers to an unbeaten season and the Central League crown. “To be honest, I did surprise myself,” Burling said. “I didn’t have a particularly great junior season. So I focused on soccer with this being my senior year.

“I seemed to find myself in the right position at the right time. My soccer IQ and experience just seemed to come together and I was in good spots to find the ball and finish.”

Over the years, Burling’s soccer prowess has been underestimated, particularly at the club level. But time and time again, he exceeded expectations as long as somebody was willing to give him a chance.

“I’ve always believed in myself but it’s been tough in the club system,” he said. “They just didn’t believe in me. But my high school coaches all believe in my ability.”

Zimmerman added: “Tyson’s always been a ‘B team’ player in his club system. He was always told he wasn’t good enough to be on the ‘A team.’ That always motived him. He has a chip on his shoulder to show people that they had misjudged him.

“I always saw good things in Tyson. But he came out this season and played at another level that I hadn’t seen. He was a good player last season, but not like this.”

Burling was named the Central League MVP, and then garnered all-region and all-state honors as well. He finished with 15 goals and three assists, and was particularly impressive in big matches. He opened the scoring with a goal in a 3-2 overtime regular season win against Lower Merion, and then added two more goals in a 5-3 rematch against the Aces in the Central League Championship Game.

“He just loves to play,” Zimmerman explained. “It looked like we weren’t going to play this season at all. So the fact that we got to play, Tyson more than anyone else recognized the opportunity, even more than any of the other seniors. He seemed like he was on a mission. He was playing like he was possessed.” “We didn’t even know if we were going to have a season, but once we started playing I knew I had to make the most of it,” he said. “When I am on the field, if I want the ball more than the opposing player, I feel like I am going to get it.”

Burling’s production is even more impressive when you consider that he is a winger. And that he plays on the left side even though he is not left-footed.

“I’ve played on the left side for my whole career at Conestoga,” Burling pointed out. “I’ve just grown with my left foot to the point where I am just as confident with the left as with the right.

“Usually the striker gets the balls in crossing passes from the wingers, but I give credit to my teammates for finding me.”

His season was so impressive, it was enough for Zimmerman to term it the “greatest by a wing player in Conestoga history in terms of scoring.” And keep in mind that Zimmerman’s won multiple state titles in 19-years as head coach.

“To score that much, from the wing, is an absurd amount of production,” he said.

“In all my years of coaching, I’ve had maybe two who have scored 10 goals from the wing. What he did was nearly double.”

And in addition to it all, Burling was voted a team captain. According to Zimmerman, he was demanding of his teammates in a good way.

“As a coach, you love it when your best player is also the hardest worker on the team,” he added.

So far, Burling has had a few nibbles from college recruiters, but very little for a player who just staged this type of breakout season.

“I’m reaching out to coaches,” he said. “I just need the opportunity, whether its Division III or Division I. I’m up for any challenge.”