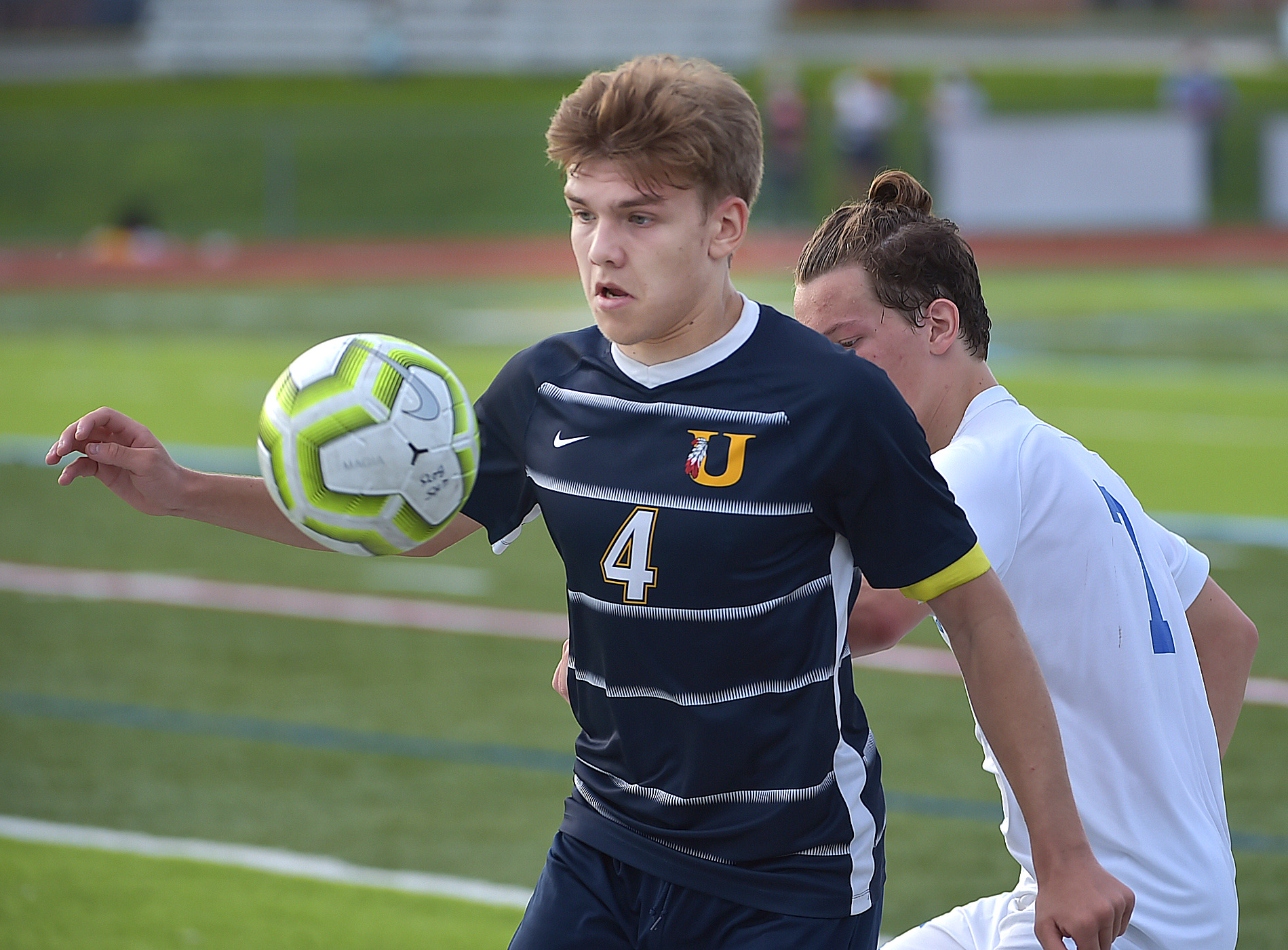 Among the top scoring threats in the Ches-Mont, Cogill notched nine goals in 10 matches this fall and was named all-league. The Vikings went unbeaten in the regular season and shared the league title with Downingtown West and Unionville. “Ryan scored against every team in our league except for Unionville,” said his coach Charlie Dodds.

Third in the voting for Ches-Mont American Player of the Year, Wellener is a four-year starter and has scored nine career goals. “He is a dynamic attacking player that was always a danger with the ball at his feet,” said Patriots coach Dave Moffett. “As team captain he kept the group of players focused, motivated and active throughout the uncertainty of the fall before the season officially began.”

A repeat first-team all-area selection, Ketterer scored 28 goals in his final two high school seasons. He had seven goals (and four assists) this fall and was named All-Southeastern Pennsylvania. “Kyle is a dangerous attacking player,” said his coach Rich Garber. “He has a combination of speed and a knack to go to goal.”

His coach, Mike Barr, calls Seele the “best midfielder in the area.” A first-team all-league pick, Seele scored five goals and added six assists. He has already drawn interest from Division I colleges. “Gavin has amazing first touch and dribbling skills, and has the ability to break down defenders are better than any player I’ve seen,” Barr said.

A first-team all-league selection, Zurlo led the Warriors with five goals and three assists in just eight contests. He has received recruiting interest from several Division III college programs. “He was one of the fastest players on the field each game,” said Henderson coach Dominic Popolizio. “Had is strong in the air off restarts and has a strong shot.”

A two-time all-league selection, Van Dyke was among the top vote-getters for the All-Ches-Mont team in 2020. A center midfielder, he had a big hand in orchestrating an attack that helped East go 7-1-2. “All of our offense ran through Owen,” said Vikings’ head coach Charlie Dodds. “He would start for every team in our county.”

The Pioneers went 14-0 this fall, outscored opponents by 56 goals along the way, and Tis was at the center of it all. The midfielder tallied three goals and two assists and is a first-team All-Central League pick. “Sebastian is a dominant defensive center-midfielder whose ball winning and passing helped control the middle of the field,” said ’Stoga coach Dave Zimmerman.

A team captain, Taglianetti helped lead the Friars to a 6-3 record against a challenging array of non-league opponents. He scored two goals and added three assists in 2020 and was a four-year varsity performer. “He is an extremely technical and creative player that is dangerous both attacking and defending,” said Malvern Prep coach Susan Barr. He is also the president of his school’s National Honor Society.

The linchpin for a defense that logged four shutouts and surrendered just four goals in eight outings, O’Leary grabbed all-league, all-region and all-state honors. A four-year starter for Unionville, O’Leary was the C-M American Player of the Year. “This year on a team with not a lot of previous varsity experience, Alex’s leadership was a major reason the team was successful,” said heads coach Rich Garber.

’Stoga surrendered just 10 goals in 14 matches (.71 goals per outing), and Dorsey was the defensive anchor. In addition, he contributed offensively with two goals and three assists, and garnered all-league accolades. “Sim is a fast, skillful center back who controlled the ball on the ground and in the air,” said his coach Dave Zimmerman.

The anchor of the Red Devils’ defense, Dunn was named first-team all-league in a vote of coaches. “Elliot is a very strong central defender with excellent technical skills,” said Avon Grove coach Mark Puican. “He was our captain and led our team.”

The Whippets went undefeated in league play, and defense was the main reason. West conceded just five goals all season for the Ches-Mont co-champs. Ernst was selected runner-up in voting for Ches-Mont National MVP.

It wasn’t easy to score goals against the Eagles – nobody scored more than one goal in any outing — and Cunningham was a major reason. He was Shanahan’s co-MVP and a first-team all-league pick. “He was one of the best players in the Ches-Mont and possibly the most talented kid I’ve ever worked with,” said his coach Jim Kalavik.

The Vikings won six matches by a single goal and Regester was a major factor in every one. He notched five shutouts in 10 matches and surrendered a total of just six goals overall. Regester was named the MVP of the Ches-Mont National as well as all-region and all-state. “Our team was ranked number one in the PIAA rankings, and the reason we were ranked so high was from the play of Johnny,” said East head coach Charlie Dodds.

Coming off a sub-.500 season in 2019, Dodds orchestrated a big turnaround as his Vikings grabbed a share of the Ches-Mont title by going 6-0-2. Buying in to his defensive schemes, East won all six of their matches by a single goal. The Vikings advanced to the District 1 Quarterfinals before falling. They finished with a 7-1-2 mark and allowed just six games for the entire season.