DLN ALL-AREA: Shanahan goalie Leppert may have come late to field hockey, but her rise to the top is ahead of schedule 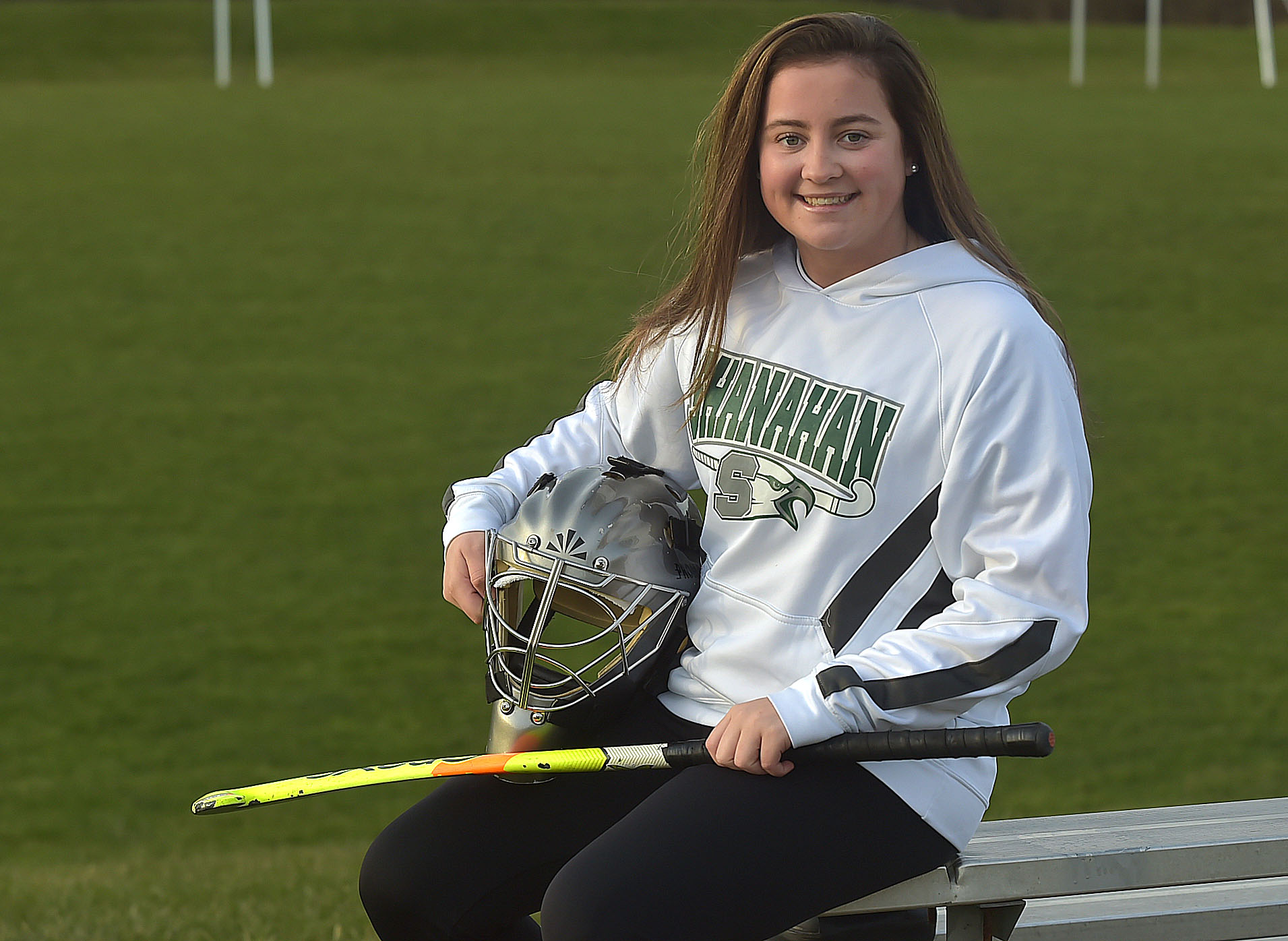 DOWNINGTOWN >> Bishop Shanahan goalie Emma Leppert didn’t get on board for field hockey until relatively late compared to many other elite athletes in the sport. It wasn’t until she was in seventh grade when she signed up for CYO field hockey on a whim. Even then, she wasn’t in the cage right away, playing as a field player at the start.

In just a few short years since, Leppert has developed into one of the very best goalies in District 1, and is the 2020 Daily Local News All-Area Player of the Year. Leppert’s first sport was soccer, a game she picked up at the age of 5. She was a “rotating goalie,” splitting her time between keeper and on defense all the way through eighth grade, when she gave it up to put her focus on field hockey.

“My field hockey career began in seventh grade when I decided to try CYO field hockey as a field player,” said Leppert. “I soon transitioned into the goal because, to be honest, no one else wanted to play as goalie. My coaches knew I had played as a club soccer goalkeeper and figured that was close enough, so they threw me in the position. In eighth grade, we won the CYO championship in triple overtime with a shootout on the goalies. After that I was hooked.”

It takes a special breed to find comfort in the cage, a willingness to withstand relentless pressure with poise and calm leadership.

“I love the competitive nature of the sport and the strong sense of community in field hockey, especially among the goalies,” said Leppert. “I love the adrenaline rush when I have a player coming down the field about to shoot. I also like the physical demand of being a goalie, like when you go for a dive and then have to get up immediately to get set for the next shot.”

Her new-found love of field hockey also meant a farewell to soccer. It didn’t take too long before field hockey coaches realized the kind of potential Leppert had, particularly as a goalie. Soon enough, they suggested Leppert find a reputable travel club, and she began playing with Main Line Mayhem. “I was a defender in grade school before becoming a goalkeeper,” said Leppert. “In eighth grade, I put all my time and efforts into goalkeeper training because I had to catch up with the other goalies who had been playing keeper since they were five.”

She caught up, and then some, blossoming into one of the top cage minders in the area. By the time she was a junior, she was leading her Bishop Shanahan team on a big post season run, with the Eagles making the state tournament for the first time in school history.

“Making it to states last year for the first time in Shanahan school history was very exciting,” said Leppert. “I definitely had high hopes for my senior season, especially as one of the team captains.”

And then COVID hit, putting any plans for any kind of a season on hold, as sports all over the world figured out how best to continue, or whether to continue at all.

“I would have never thought that we would be in a world pandemic, so it definitely changed the tone of the season,” said Leppert. “Our focus became following the rules and staying safe to ensure we would have a season. Getting back on the field brought a sense of normalcy in a time that was so uncertain. Each game was so special as we didn’t know if it would be our last.”

Not only was her senior year different because of the pandemic, she would also be adjusting to a new coach, as long-time coach Nancy Roselli had stepped down. Taking over was Maria Mastrocola.

“I think any coaching change is always an adjustment,” said Leppert. “Coach Roselli was a great coach for so many years. We lost both her and Coach Wick. The bigger adjustment, however, was adapting to COVID changes. We initially had to have practices in two different cohorts, which was such a different experience. Coach Maria did a great job of coming into a new team during a pandemic and we were still able to make it a great season.” Once again the Eagles battled tough in the Ches-Mont, with wins over Downingtown East, West Chester East and Coatesville, along with a tie against Avon Grove. Despite tough losses to Downingtown West and Henderson, the Eagles earned the fifth seed in Districts.

Leppert was as good as ever, with shutouts in all three wins, and a save percentage of 89.23.

“She is a very solid keeper,” said West Chester East coach Jessica Rice. “She was the one on their team that prevented us from beating them this year. We lost with no time left in overtime on a corner. Heart breaker!”

With the season cut to seven games from the usual 20-plus, Leppert’s senior season was gone in a blink. But that doesn’t mean there won’t be plenty of fond memories.

“I will miss my Shockey teammates, my coaches, and especially watching the underclassmen grow not only as players, but as individuals,” said Leppert. “It meant so much to me to get back on the field again with my high school teammates. We always manage to make such great memories.”

Leppert will continue her field hockey career at the Division 1 level, but staying close to home at Villanova University. Still unsure of long-term academic and career goals, Leppert will enter as a Liberal Arts major.

“Villanova has always been my dream school,” said Leppert. “I fell in love with the university the second I was on campus. There is so much school spirit –– you can tell everyone who goes there loves it. I was looking for a school that would challenge me both academically and athletically. The field hockey team is so welcoming and I couldn’t have asked for a better coaching staff.”

Family will always play a big role in Leppert’s life, though, as the youngest of three sisters, Leppert carved out her own niche in field hockey. Rachel and Rebecca serve as role models for life.

“Neither of them played anything but intramural sports,” said Leppert. “I am incredibly proud of both of them. Rebecca is a senior at The George Washington University and spent her junior year studying abroad at the University of Oxford. My oldest sister, Rachel, is a hematology-oncology nurse at Georgetown University Hospital. Their talents were in different areas.”

“We are all big sports fans in general, and my family never misses a game,” said Leppert. “Although my parents are my biggest fans, who I was as a person mattered more to them than my performance on the field. They have always supported me in whatever sport I was playing. They would be the parents watching my game in the pouring rain. They have shown me the importance of hard work and dedication.“

Every great athlete needs that kind of support system, and Leppert recognizes that.