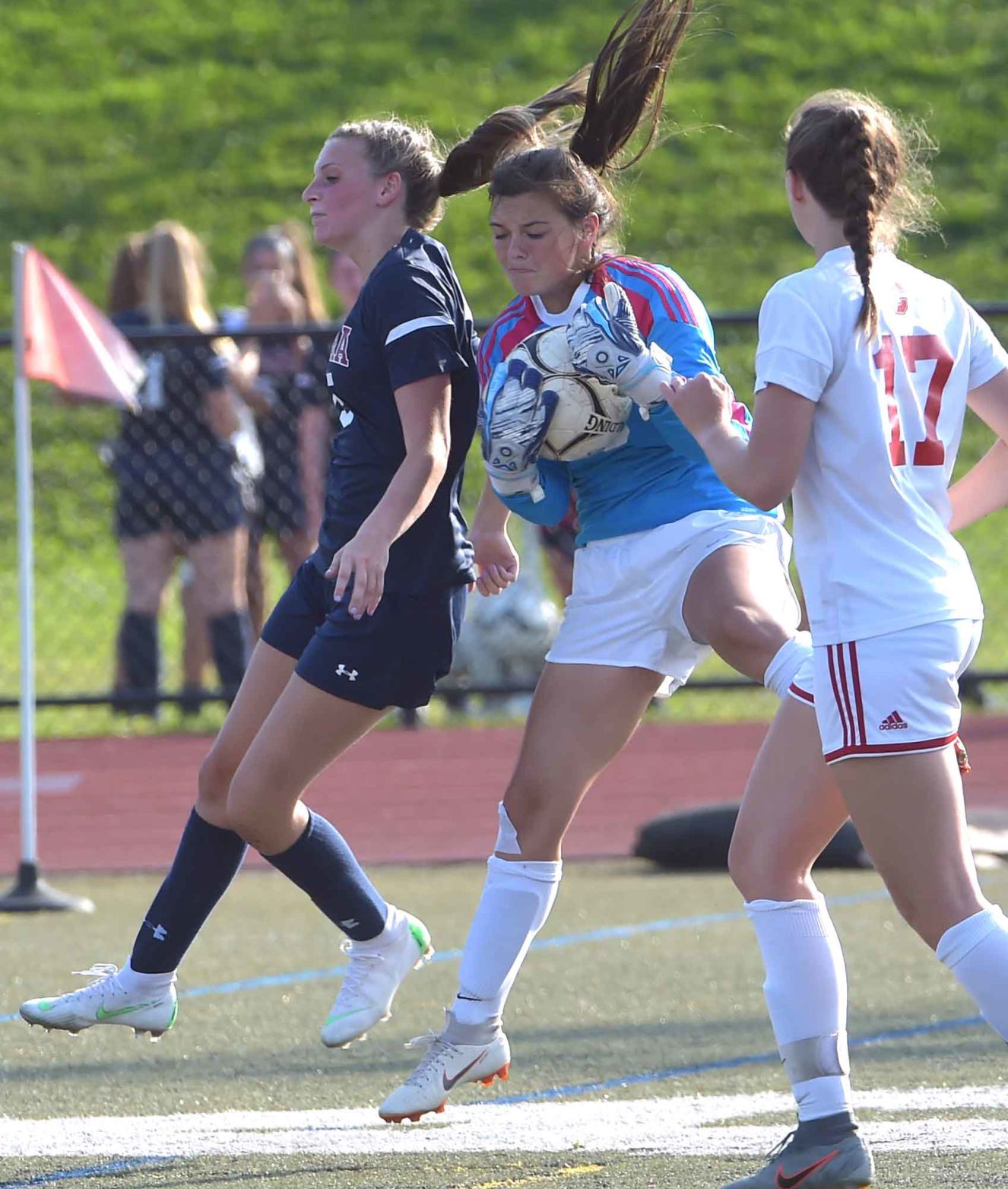 Archbishop Carroll goalie Nicollette Cashin, center, collects a ball into the box under duress during a 2019 game against Cardinal O'Hara. This fall, Cashin led Carroll to the first PIAA tournament in program history. (Pete Bannan/MediaNews Group)

Were this a normal year, Nicollette Cashin could imagine the excitement in the halls of Archbishop Carroll during the fall.

Girls volleyball: In the state tournament.

Girls soccer: In states, for the first time in program history.

Field hockey: Not just in states but in a state final, a first for Carroll and for District 12 in the sport.

Football: In states, after Neumann-Goretti tested positive for COVID-19 and had to withdraw, but even able to win a game over New Hope-Solebury.

Were it a normal year with that level of athletic accomplishment, the buzz would’ve been palpable. But in the era of COVID-19, with hybrid schooling and no more than half the student body trekking to Matsonford Road each day, imagination was all Cashin, the soccer team’s senior goalie, was left with.

In their own ways, uniquely so in a year that has been so unique, Carroll’s athletic community made the best of it.

“When we were in school, the school did try their best to make every team feel like they’ve accomplished everything and give us our spotlight for the time being and give us the recognition we deserved,” Cashin said recently. “They wanted each team to feel special in their own way, so they made sure that happened. I definitely wish we could’ve been in the school all together, but due to COVID, we had to make do with what we got.”

The recognition came after the season, too. Cashin was one of the three Patriots on the All-Catholic League first team, as chosen by league coaches. She was joined by forwards Keri Barnett and Kiley Mottice, the high-scoring axis that Cashin credits with taking the team to the next level.

Cashin led the way at the back, a multi-year starter who used years of experience to lead Carroll into uncharted program territory. In 11 games, Cashin allowed just 11 goals and made 67 saves, helping the Patriots to an 8-3 record.

For two of the four states-bound Carroll teams, the stay was brief, with PIAA tournaments permitting only district champions. The volleyball team was swept out of its opener of the PIAA Class 4A tournament by Unionville, which would reach the state final. The Patriots put three players on the All-Catholic volleyball first team – Meghan McCann (an All-Delco in 2018), Ava Adams and Erin Matthews.

The girls soccer team made the trip to Mechanicsburg and was dealt a 4-0 loss by District 3 champion and traditional powerhouse Cumberland Valley. Though not the end they envisioned, it didn’t dampen what they had accomplished.

“It was nerve-wracking, but after a few games and getting into the swing of things and us just playing outstanding and the team finally playing together, it was so good,” Cashin said. “Especially senior year, making that such a big accomplishment, it was definitely one of the best feelings.”

The field hockey squad placed four on the first team All-Catholic. Carleigh Conners, a James Madison signee, was the standout in midfield, an imposing, do-everything player who controlled both phases of the game. She scored four goals and added four assists.

Four seniors saw action in the state final, led by Keith and Conners. But the youth in the side, epitomized by Kingsbury and Golden, show how much promise remains for the future.

“I just think it gives a pep start to Carroll,” Conners said after the state final. “It increases the student-athletes coming into Carroll. … I just really think this is the start to Carroll field hockey. We’re going to be here again.”

Cashin hopes this season’s soccer success set down a similar marker. Cashin expects it’ll take time for next year’s team to grown and stake out its roles in this way this year’s Patriots did. But the talent is there.

So too, thanks to players like her, is the pathway forward.

“They’re going to have to work their way up to find different parts that are missing again and it’s probably going to be another slow building process,” Cashin said. “I think they’re going to get there quickly because there are so many freshmen that are doing phenomenal and growing and I know the juniors that are going to be upcoming seniors are going to be great leaders. They just need to find a few key parts, but the expectations will definitely still be there.”