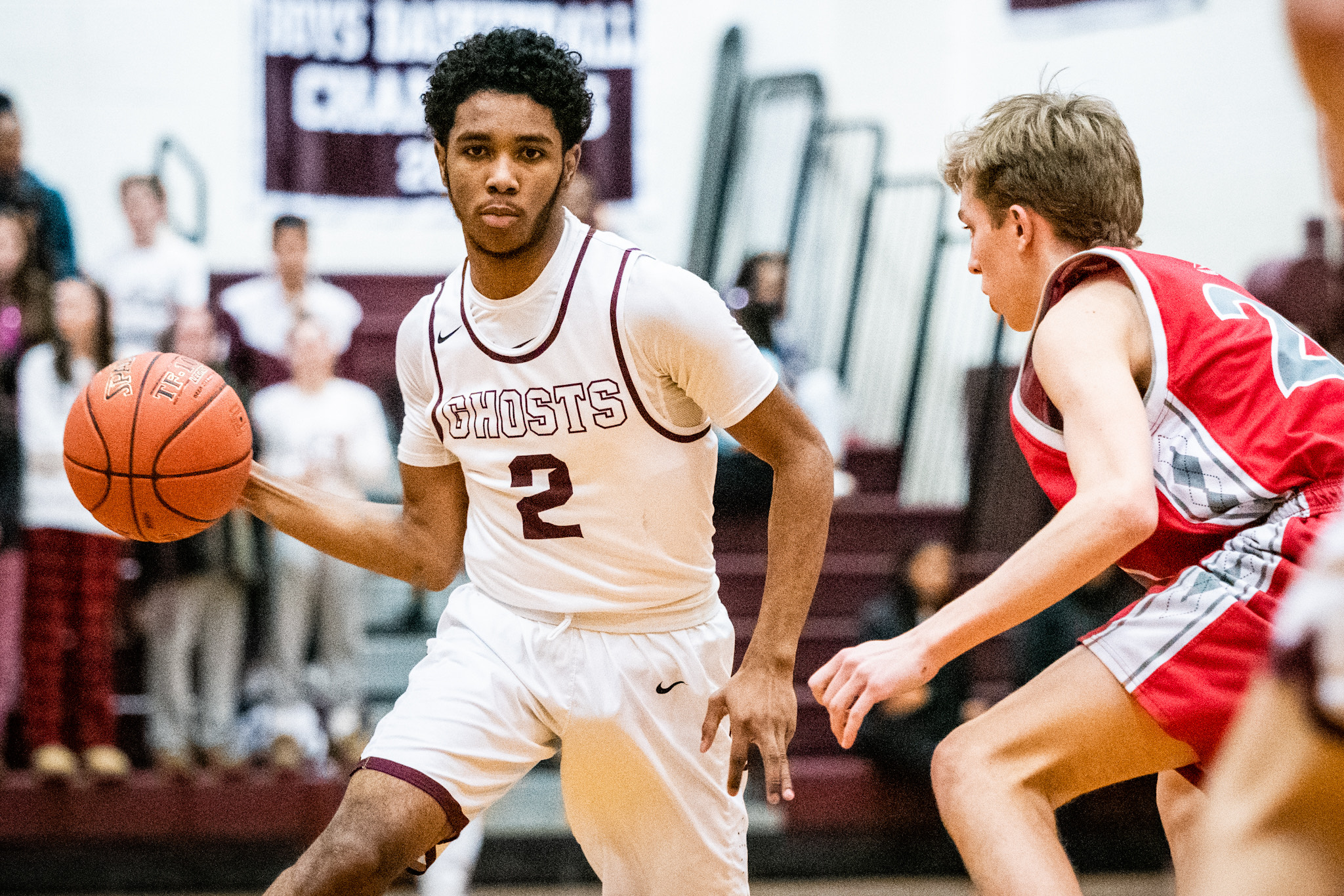 Abington’s Antoine Ellis (2) looks to pass to the corner against Upper Dublin during their game on Friday, Jan. 24, 2020. (James Beaver/For MediaNews Group)

The long-awaited return of high school basketball in Pennsylvania is going to have to wait a little longer.

New mitigation efforts from Governor Tom Wolf released last Thursday in the wake of rising COVID-19 numbers across PA included a three-week shutdown of all K-12 athletics. For are high school programs, many just ramping up into preseason practice, it was another sudden halt as all activity was paused until at least Jan. 4.

As they’ve had to numerous times in the past nine months, local coaches and players will have to bridge the gap as best they can and pick up where they left off as soon as they are able.

“There’s nothing you can do about it, the league shut us down for two weeks, now the state has us down for three weeks but I get it,” Pennridge boys basketball coach Dean Behrens said. “The numbers are going up, if they were going down, I’d feel better about it. The biggest thing for us is we’re going to have to stay in shape.”

The Rams were one of the last teams in the Reporter/Times Herald/Montgomery area to play a game last season before all PIAA competition was halted on March 12. After his team’s loss to Roman Catholic in a PIAA 6A second round game the night before, the veteran coach talked about a sense of closure and that his players at least got to play a final game.

That was unfortunately not the case for a handful of other area teams that were still alive in their respective state tournament brackets. Among them was the Plymouth Whitemarsh girls basketball team.

Knowing the Jan. 4 target date was not a surefire bet for an all-clear, the Colonials organized an in-team scrimmage last Friday in their final practice before shutting down. PW, which returns all five starters and its top reserve players, broke its squad in half, donned its uniforms and had a competitive game before going their separate ways.

Normally, the week leading up and the week between Christmas and New Year’s Day is an extremely active period for local teams. Archbishop Wood’s girls team usually competes in the Nike Tournament of Champions in Arizona in late December, but that event has changed to a club tournament this year.

Many teams opt to host or participate in holiday tournaments, either locally or out-of-state like PW did last year going to Delaware while plenty of others take part in showcase events. Abington boys basketball is frequent participant in Play-By-Play Classic events held over the holiday season, but won’t have that chance this month.

“Everybody’s affected by it, everyone is on the same playing field now,” Ghosts coach Charles Grasty said. “It’s not like other people are playing in those showcase and we’re not. Our league in Suburban One tends to do well every year and we expect it to be competitive again and we’ll get games in against each other and hopefully get better.”

Due to a two-week shutdown in Montgomery County in late November, the Ghosts hadn’t even completed tryouts when the new regulations came down from the Governor’s office. While Abington expected to return most of its starting lineups, there are always new players looking to make their mark.

It’s the same across the board whether a team has plenty of continuity like Jenkintown’s girls or Archbishop Wood’s boys or has a lot of positions to fill like Cheltenham’s boys and North Penn’s girls teams.

“There’s a chance we could have a number of seniors, these guys are all friends, when they could, they would go shoot together or work out together,” Grasty said. “These kids, they love the game. It’s just fun to them so they enjoy playing and you could see in the two days we had that love of the game and wanting to get back at it.”

In the spring and summer, athletes could compensate by either going to a local gym or park and putting up shots or getting a workout in. Upper Moreland’s girls basketball team got creative over the summer, meeting for group workouts at an outdoor park with their gym still closed and other teams took a similar approach.

With temperatures falling and a potentially significant snowfall coming Wednesday, the outdoor option may be difficult to make use of.

“It’s the middle of December, the chances of being able to go shoot hoops in the park are pretty slim,” Behrens said. “There are a couple workouts on Zoom the kids can do, but it has to be in your house. We’re not promoting the kids getting together and doing things.

“The boys can go shovel the snow for their parents; that may keep them in shape.”

The PIAA, which met last Wednesday, had established that like the fall, the winter state tournaments would only feature district champions. Teams that didn’t make the postseason or got eliminated would be able to schedule games through the end of states as the PIAA touted maximum flexibility.

At this point, there’s no guarantee Jan. 4 will see teams return to the gym and even if it does, programs will need time to get back to where they left off and keep moving toward a season.

“We have to deal with it, take it and use and try to learn from this experience,” Grasty said. “We’re staying in touch as much as we can, it’s the situation we’re in and it seems like we’re going to be in it for a while so let’s learn from it.”