Cheltenham’s Sykes learns what it takes, signs with St. Francis 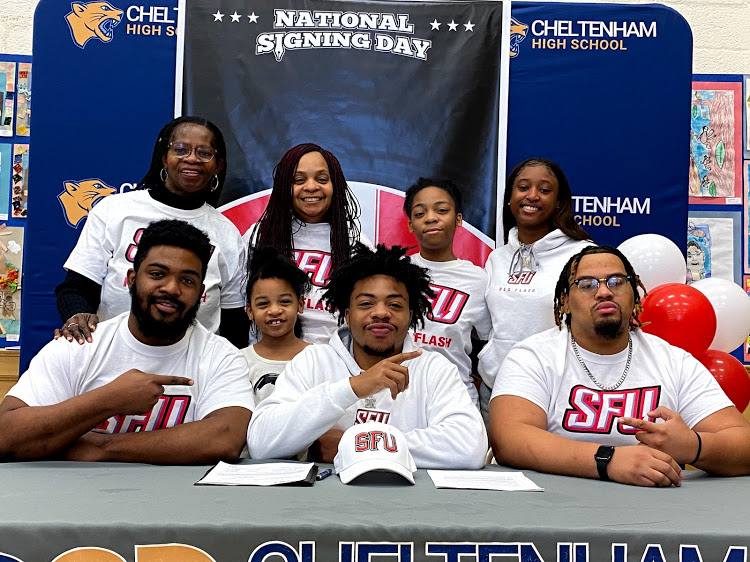 The Cheltenham senior is a gifted athlete, a dedicated student and as of Wednesday afternoon, a future college football player. Signing his National Letter of Intent with St. Francis (Pa.), Sykes put a mark on a three-year journey

For Sykes, his family, his coaches and program, it was day worth celebrating because it was a moment that was truly earned.

“When I first had a conversation with the coaches, they were really excited about my film and they gave me an opportunity I couldn’t pass up,” Sykes said. “They offered me a full scholarship and for me, that was the biggest thing, to be able to go to college and not have my mom pay a thing is really a blessing and it’s a dream come true.”

The relationship with St. Francis started with Sykes taking some initiative. He reached out to the coaching staff, introduced himself and sent some film after his sophomore year. The Red Flash liked what they saw.

“They really liked me and it was mutual,” Sykes said. “I really feel comfortable and this is where I’m going to be the next four years. I’m excited for what’s ahead.” Sykes, who played outside linebacker on defense and split between running back and receiver during the Panthers’ District 1-5A championship and PIAA title game run in 2019, expects to play defensive back at the next level. Cheltenham coach Ryan Nase noted that was another sign of Sykes’ growth that the senior could earn a Division I scholarship for a position he hasn’t played a snap of in high school.

Getting Sykes into a position of production for Cheltenham took a lot of tough love during his freshman year. The ability was there, but Nase and his coaches had to get the young man to understand the importance of academics so he could actually be on the field to use it.

“I think this one is one of the best because Sam will be the first to tell you he didn’t get it right away,” Nase said. “He didn’t walk into Cheltenham and say ‘I got this thing figured out,’ he really struggled to adjust as a freshman football-wise, accountability-wise and especially academically. It didn’t go well, but he listened, we talked to him three or four times a week about what the right things to do were.”

Sykes gave Nase a ton of credit for putting him on the right path, citing the fourth-year Panthers coach never hesitated to tell him what he needed to hear, even if it was something Sykes didn’t want to hear. On the same page, Nase gave Sykes plenty of props for applying himself and said the All-SOL performer has posted at least a 3.5 GPA in every semester since the start of his sophomore year.

Cheltenham did not participate in any fall athletics this year due to COVID-19, but Sykes didn’t let that be an opportunity to slack off and had a 3.7 GPA for the first marking period. Nase, who played collegiately at Lafayette and coached at the college level, noted the importance of academics in a player’s quest to reach the next level.

“He’s a guy that all you have to do is mention how hard it was freshman year and he’s right back on track,” Nase said. “The growth he’s shown not just as a football player but mostly as a student is the best part of Sam’s story. The reality is he probably doesn’t get a football scholarship if his GPA isn’t over 3.0.”

Sykes said he plans to major in communications at St. Francis.

On the field, Sykes’ journey began in Olney where he actually started out playing as a lineman. That wasn’t it for him and following his brother Nate Edwards’ steps, slimmed down and got a chance to play running back at Lawncrest.

“I scored three touchdowns in one game and after that, it was over,” Sykes said. “That’s when I fell in love with it and it was something I wanted to pursue. Whether it’s my senior year of high school, senior year in college, the NFL, wherever it ends, I want to ride it until the wheels fall off.” Last fall, on a senior-dominated team, Sykes played a critical role. At linebacker, he recorded 118 tackles, an interception, forced two fumbles and recovered one with one sack. Offensively, Sykes rushed for 485 yards and two scores while he caught five passes for 145 yards and two scores.

His standout performance came in one of Cheltenham’s biggest wins of 2019. Locked in a back-and-forth battle against Plymouth Whitemarsh with the winner getting the inside path to an SOL American title, Sykes caught the go-ahead touchdown then made the game-saving tackle on a fourth down run at the Panthers’ goal line as time expired.

While the Panthers did not compete this fall, they plan to play this spring as part of the “United Ten” league of other schools that did not have a regular football season. With plenty of teammates hoping to follow Sykes into the college ranks, the senior is eager to get his team back on the field.

“I’m looking forward to ballin’ with my guys one more time, the seniors worked hard for this and deserve it,” Sykes said. “We had a lot of good players who couldn’t play because we had so many studs on the field at the same time, but we have a lot of guys who can play. We want to prove last year wasn’t a fluke and we’re here to play.”

Nase doesn’t give out the title of captain lightly, in fact the Panthers only had one team captain last season, but Sykes wants to earn that title when the team returns to the field. With another very talented crop of young players in the program, Nase is looking for the right guys to lead them.

Sykes has stepped up, taking freshman Zaire Williams under his wing and pay forward all the advice, time and sometimes tough love he got to set him on the right path.

“It’s something he takes seriously and knows I take seriously too,” Nase said. “Zaire Williams will really open some eyes, he reminds me of Sam as a ninth grader and Sam even sees that. They have similar stories and I’ve already seen Sam pull him in and tell him ‘dude, please don’t make the mistakes I made as a freshman. Don’t make it as hard on yourself as I did, and (Williams) listens to him.”

Sykes’ family means a lot to him and his family has unified through Cheltenham football. Older brothers Manny and Dan Rouse were standouts on the 2011 team while Edwards is preparing for a spring season at Lackawanna College.

St. Francis isn’t right around the corner, but it’s not far enough away that Sykes’ family won’t be a fixture at Red Flash games.

“My mom, she made so many sacrifices, even if she didn’t have the money, she made sure I had the equipment I needed to get me out there,” Sykes said. “My grandmom is always at the games supporting me and my brothers, they all played football, they’re my inspiration and my reason why I’m here today and why I go so hard.”