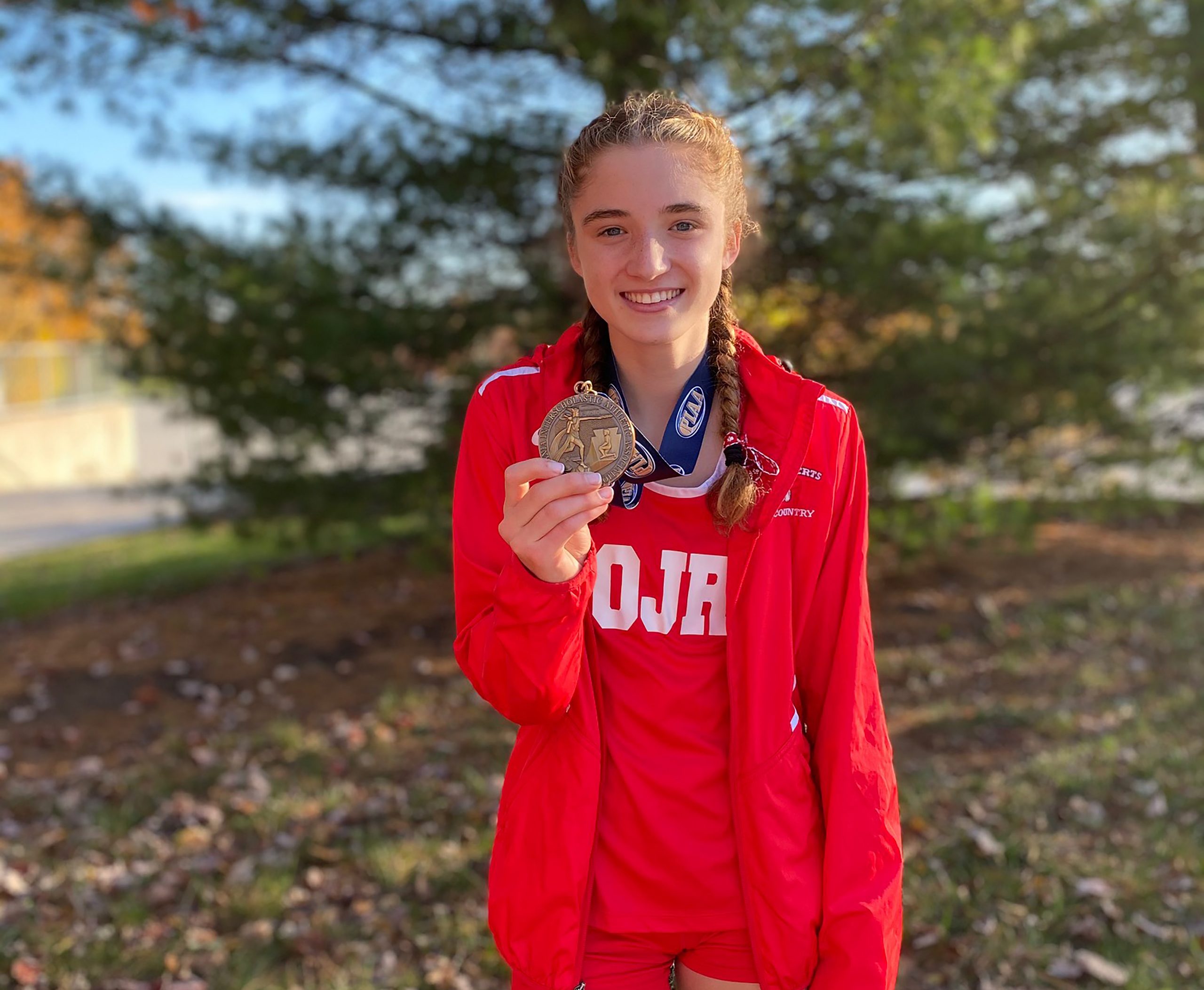 Like every other high-school runner in the state, Claire Zubey came into the 2020 cross country campaign facing previously-unexperienced challenges.

But like a select few of those competitors, she came out of the season with a higher measure of success.

Zubey used several encore performances to achieve the ultimate repeat: The Mercury’s 2020 Girls Cross Country Runner of the Year. She did so in a season where the COVID-19 pandemic left an indelible mark on the competitive landscape in Pennsylvania. forcing runners to adapt to different circumstances and requirements than those previously faced.

And her high-level goals remained the same.

“With less meets and invitationals, I was working toward districts and states,” the Owen J. Roberts sophomore said. “I began with a little injury but worked to get back for districts.”

Zubey’s tuneup for the postseason showed flashes of excellence. In three duals she ran — at home against Spring-Ford Oct. 14 and Pottsgrove Oct. 16, at Upper Perkiomen Oct. 23 — Zubey finished ahead of the rest of the field by more than 1-1/2 minutes.

The meet with the Falcons was marked by two signficant statistics. The season-best 19:10 she ran also had her finishing close to four minutes in front (3:53) as a prelude to the Nov. 2 District 1-AAA meet … one that became the postseason start-up, with the Pioneer Athletic Conference championship meet not being staged due to the pandemic.

“It was weird not having PAC meet,” Zubey noted. “But I was proud of how I did. It was good to be racing.”

“It was tough. We didn’t really know if we would have a season,” OJR head coach Tim Marcoe added. “It was a challenge for one (me) who likes to plan.”

In the district meet at Newtown’s Tyler State Park, Zubey got a taste of what she dished out to regular-season opponents. The 19:19.7 she clocked got her second place, little more than a minute behind the 18:18.2 that got West Chester Henderson junior Jenna Mulhern the gold medal.

“For most of the race,” she recalled, “I ran second or third, in the front pack. Jenna was before me. I wasn’t sure who was third place.”

Third place was claimed by Mulhern teammate Liesl Scherrer, who crossed the line in 19:35.50. They headed the “fast” first heat in a field where the top 10 finishers all cracked the 20-minute mark.

“It was nicer being in the bigger heat, because I didn’t have to wait long to find out the finish,” Zubey, who had to wait about 20 minutes for word of the final result, said. “Hopefully, by next year, it won’t be the same.”

In her second trip to the state championships, Zubey was part of a configuration in which each of the six categories ran four heats, then had the finishing times collated to determine the overall finishing order. She just missed a second Top 10 outing, consigned to 11th place with a time of 19:46 matched by Oakland Catholic’s Tesslyn Helms.

The 10th-place finisher, Meredith Price of Pine-Richland, was just three seconds ahead of Zubey/Helms at 19:43.

“I didn’t know how I did, with the heats,” Zubey noted. “I didn’t go out crazy. It was pretty quick.”

“Hershey has a lot of hills. It can be challenging. The Warwick course definitely prepares you,” she said.

In preparing for the 2020 cross-country campaign — her first competition since the 2019-20 winter track season — Zubey adjusted her sights on what to accomplish.

“My goal for the season was to medal,” she said. “I wasn’t on course to set a PR (personal record).”

She was able to work with some teammates at Warwick prior to the start of team workouts. The quarantining restrictions placed on athletes ultimately limited the number of runners a team could put in a meet (12) … a problem for Roberts’ super-sized team.

“I felt bad because our team is bigger,” Marcoe said. “Our jayvees, I give them credit for sticking with it.”

In a variation from the program’s usual training regimen, Zubey and her Wildcat teammates engaged in intrasquad “track” races at Wildcat Stadium. It ran those races twice.

“There was a lot more waiting this year,” Zubey added.

With hopes for running another season of winter track, Zubey will have to wait and see how the pandemic shapes the competition format.

At present, Marcoe noted, meets will not start until January and be of the “polar bear” variety, run outside. Competitors will have to wear masks, and certain events like relays, pole vault and high jump may not be staged.