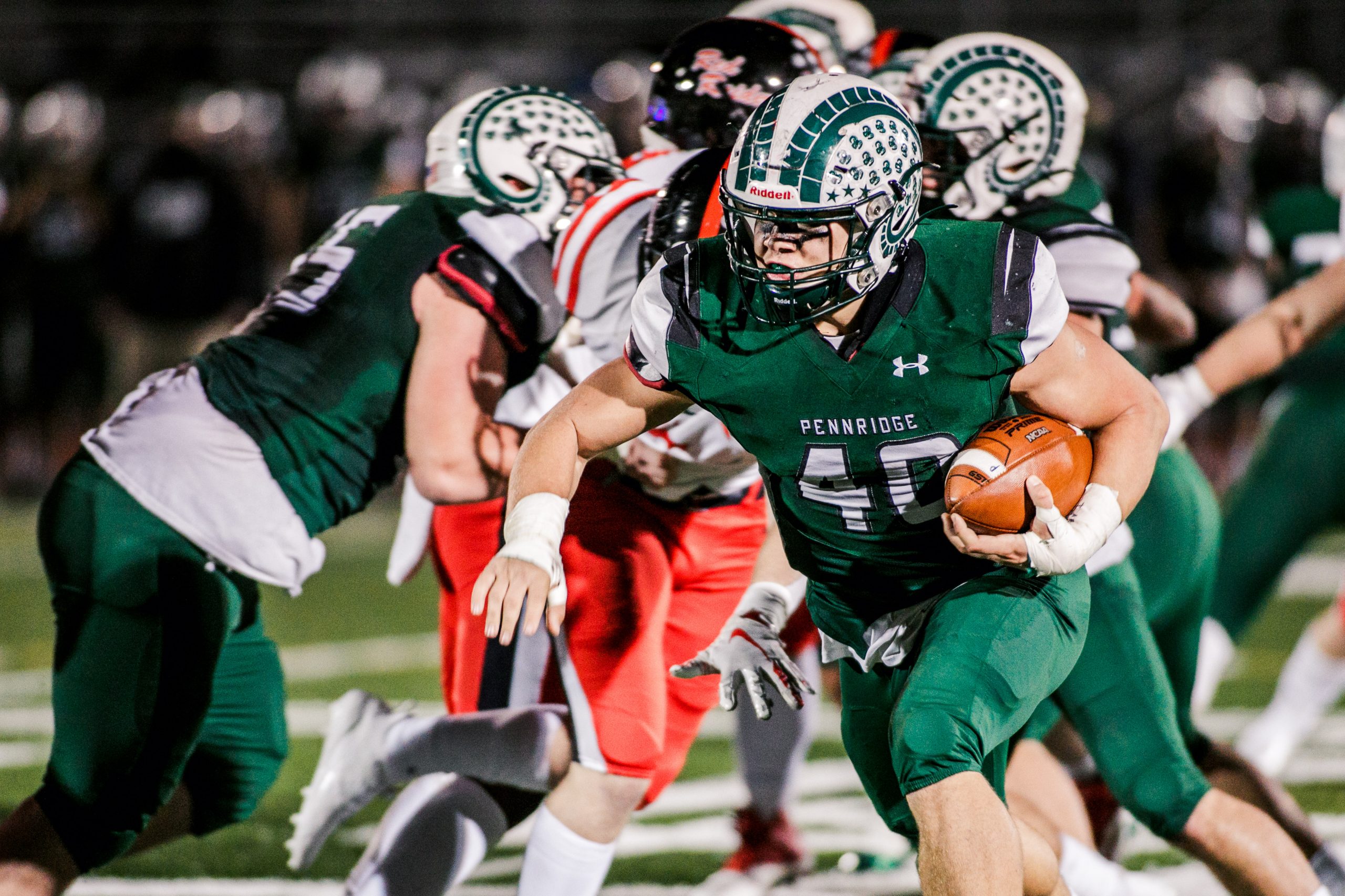 An ankle injury took the majority of Shane Hartzell’s junior season. For a moment is seemed COVID-19 might end his senior year before it even started.

So when the Pennridge football team’s 2020 finally kicked off on in early October at Central Bucks West’s War Memorial Field, he was ready to go.

Hartzell ran for a pair of touchdowns in the first quarter – the first from 47 yards out – then added a third score in the second quarter. The Villanova commit finished with 124 yards on 10 carries while also anchoring the defense from his linebacker position as the Rams rolled to a 35-14 win.

“But it felt amazing just to be back out there. I mean, there’s nothing like it coming back from a season-ending injury and then we weren’t even sure if we going to be able to play. And then do that in the first game and then have the season we did, it was really amazing.”

And through a condensed and uncertain season, Hartzell and Pennridge kept showing what they could do. Hartzell – the 2020 The Reporter/Times Herald/Montgomery Media Football Athlete of the Year – helped lead the Rams’ turnaround from a 3-8 squad in 2019 to a side that went 7-1, earned the program’s first conference title in eight years and its first-ever appearance in the District 1 final.

“Just got to be grateful, we were in a position that a lot of kids weren’t able to be in,” Hartzell said. “A lot of kids had their seasons taken from them and they won’t get that back. Put it into perspective, it was really special. It was something really special. With everything going on in the world now, being able to come together as a family, as a team and to do what we did, we all will remember it for the rest of our lives.”

Hartzell paced Pennridge’s rushing attack that averaged 243.1 yards in its eight games, carrying the ball 65 times for 559 yards and six touchdowns, caught five passes for 82 yards and also found the end zone on a 70-yard kickoff return against Abington Oct. 20. He ran for touchdowns in both of the Rams’ District 1-6A playoffs contests, including a 97-yarder in the semifinal win over Coatesville.

“The line did it all. I just had to do my part and outrun ‘em,” said Hartzell on the long scoring dash. “Once I got to the end zone, I felt like I needed an oxygen tank.”

Hartzell, who said his biggest improvement this season was in his leadership role, was superb at linebacker for a defense that allowed just 13.4 points per game and had a streak of three consecutive shutouts as the gave up only 29 points in five regular-season contests.

“Last year I was also a captain but I wasn’t as vocal as I was this year,” Hartzell said. “Last year I was more leading by example and then when I got injured, I mean I was still there every single practice, every game but this year I think I definitely stepped up into the leadership role and that’s huge. Coach (Cody) Muller challenged me to do that and you know I met that challenge. I mean, we have leaders out there at every position so that was huge.”

Hartzell earned All-Suburban One League National Conference first team honors at linebacker – one of six Rams on the first team defense – and was also second team selection at running back as Pennridge went 5-0 to claim its first SOL title since the 2012 squad that won the Continental Conference.

The Rams qualified for districts for the first time since 2017 and collected their first postseason win since that same season when it rallied to beat Coatesville 36-33 in the semis. Pennridge fell to Souderton in the district final but capped its 2020 with a 21-14 comeback win over Quakertown on Thanksgiving.

“I think it kind of puts Pennridge back on the map a little bit,” Hartzell said. “We had a good season in ’17 but other than that our seasons were a bit rough. Now it really establishes us as a program. This senior class, we’ve done so much for this program, whether it’s just giving back, doing what’s right and this year we just played like Pennridge has played in the past, which is physical, we were just more physical than every other team.”

After Hartzell’s 124-yard, three-TD rushing effort helped the Rams cruised past West in the season opener, Pennridge handed Neshaminy its first shutout loss since 2012 – and its only defeat of2020 – with a 30-0 victory. Hartzell ran 12 times for 79 yards and also caught two passes for 48 yards.

“Right from the beginning, even before the games, I think we all were bought in, we all believed,” Hartzell said. “But really after the West game and then going into the Neshaminy game, we got our confidence back which is huge in the game of football. I mean, going out there, beating Neshaminy and not allowing any points that gave us a lot of confidence which really helped I think.”

The Rams did not allow a point in either of its next two games in completing a sweep of the Central Bucks schools. They beating CB East 42-0 on the road with Hartzell pacing Pennridge with 65 yards on nine carries then went to 4-0 with a 32-0 home victory over CB South.

“The shutout’s nice and all but at the end of the day the win’s the win,” Hartzell said. “Defense played well and it’s really nice having a change that our offense would put up points. Last year we struggled putting points up on the board, but now this year the way our offense was, it really helped the defense out a lot.

“Last year, defense was on the field probably three quarters of the game and you know when that happens it wears us down. But this year running the ball, really establishing that, got the defense on the field and we were real fresh for the next drive.”

Against Abington, Hartzell took a second-quarter kickoff back 70 yards for a TD but later left the contest due to injury. The Rams beat the Galloping Ghosts 21-15 for the SOL National crown and the top seed in the District 1-6A playoffs with Hartzell back in action for a semifinal clash with Coatesville.

In the second quarter against the Red Raiders, Hartzell produced points on both of the ball. First, he got into the backfield to force a fumble recovered in the end zone for a safety and a 19-14 Pennridge lead. He made it 26-14 with the Rams at their own 3, bouncing a run around the right side and racing down the sideline for the 97-yard TD. Hartzell finished with a game-high 123 yards on eight carries.

Coatesville took a 33-29 lead in the fourth but Pennridge responded to go back up 36-33 on Jack Ferguson’s 40-yard touchdown run with 2:44 remaining. The Rams defense held on the ensuing Red Raider drive to advance to the district final at 7-0.

“That really defined us. Just the grit we had, the drive, we never gave up,” Hartzell said. “That last drive we had where we faced with a fourth down, 4th & 5 whatever it was and Bobby (Croyle) throws the ball, Adam (Mossbrook) picks up the first down. Not a lot of teams can do that. A lot of teams will break under that but us as a team, we played as a family, we weren’t going to go down without a fight and we came out on top.”

Against Souderton in the District 1-6A final, Hartzell pulled the Rams within 17-10 in the third quarter as he burst up the middle for a 47-yard touchdown run but that was as close as Pennridge got from there in a 31-17 loss to the Indians.

The Rams, however, made sure to finish 2020 on a high note with a Thanksgiving win over Quakertown. Hartzell ran for a TD for a third straight game, putting Pennridge up 7-0 with a 9-yard run in the first quarter. Down 14-7, the Rams scored two touchdowns in the fourth to rally for a 21-14 win – their fifth straight over the Panthers on Turkey Day and their sixth overall in the rivalry.

“That whole week leading up to the Quakertown game, coach Chuck Muller was talking about redemption,” Hartzell said. “And this game was all about redemption for us. We didn’t play very well against Souderton but we weren’t going to let that define us. We still had one more game to go out on top.

“And it wasn’t the prettiest game but a win’s a win. I think we were very physical and there’s nothing better than beating Quakertown on Thanksgiving.”