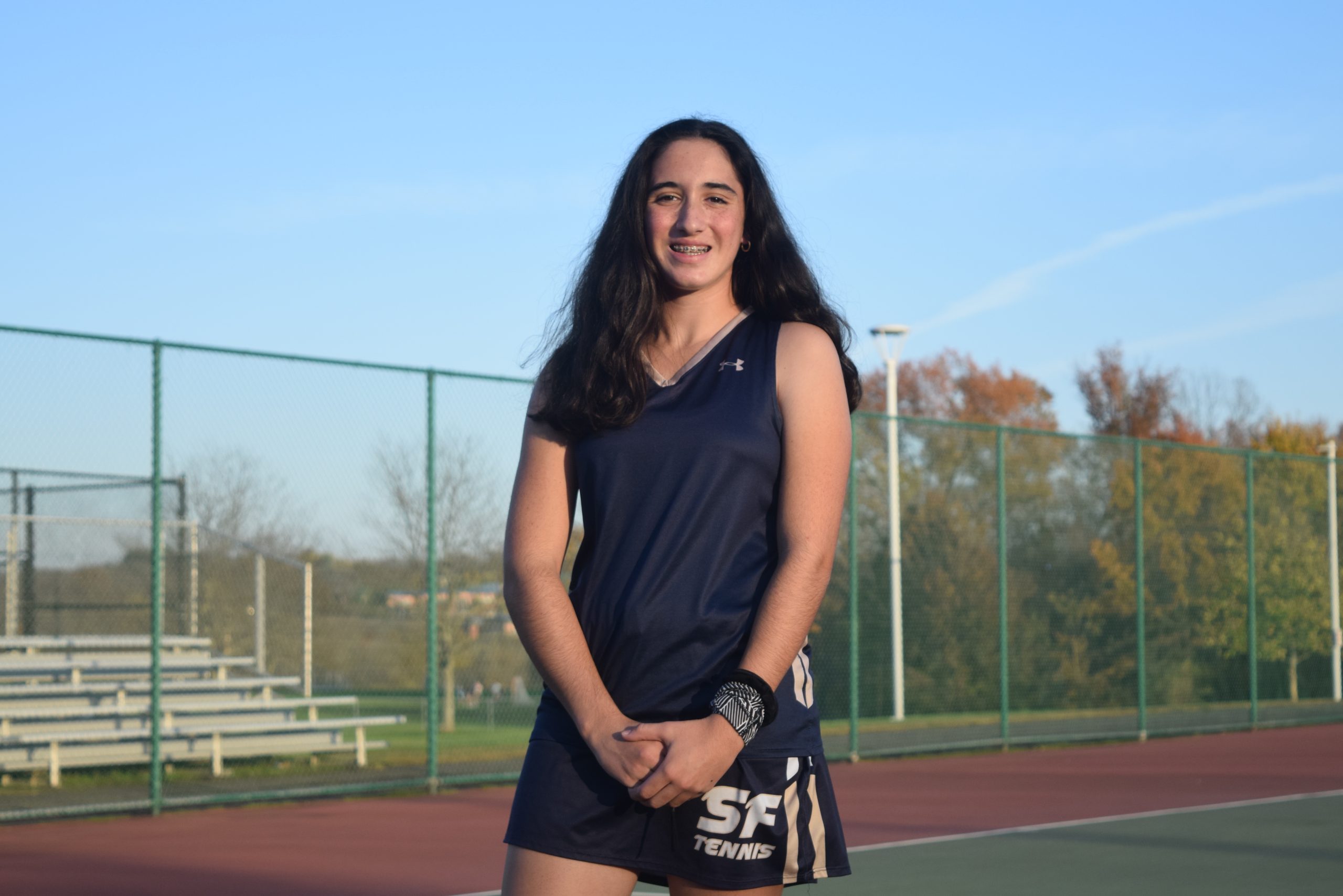 The Spring-Ford girls tennis team sat on the bus shortly before entering Hershey Racquet Club to play for the PIAA Class 3A championship, the most significant match in program history.

It was the biggest match in every player’s career, and more than a few were suffering from a crisis of confidence.

The Rams were in need of a pep talk.

Naturally, a freshman had the words to set her teammates’ minds right.

Naturally if that freshman is Mia Matriccino, Spring-Ford’s No. 1 singles player, the Pioneer Athletic Conference singles champion and District 1 runner-up whose game may be rivaled only by her wisdom.

Matriccino heard her teammates express nerves and doubt: ‘That’s when I decided, they need something.” For senior teammate Lucy Olsen, those pre-match nerves were never higher. Despite being the two-time Mercury Girls Basketball Player of the Year and being no stranger to PIAA competition in basketball, tennis is a side sport for half of the Rams’ No. 1 doubles team and she was unsure she had what it takes to win.

“We were sitting on the bus before the state championship match and Mia was like, ‘Guys, you’ve gotta go out there and play with confidence. You can’t get down on yourselves if you make a mistake. Just keep playing for the next point,’” Olsen recounted. “I said, ‘Mia, that’s easy for you to say because you have the skill to back up your confidence.’ Me and Tiff (partner Emily Tiffan) are sitting over here feeling like we don’t really have anything to back up our confidence, so we can’t be confident. Mia goes, ‘That’s your problem already. Your mindset is already wrong.’

“I said, ‘All right, I’m going to be confident. If it works for Mia maybe it’ll work for me too.’ And Tiff and I go out there and we have our best match ever.”

Matriccino talked the talk that aided Olsen and Tiffan’s 6-2, 6-1 win at No. 1 doubles. Simultaneously, she walked the walk in a way few could.

Matriccino’s opponent at No. 1 singles, Jenna Bell of Greater Latrobe, wasn’t just formidable; she already owned a win over the Spring-Ford rookie, a 1-6, 7-5, 1-0 (6) supertiebreak verdict on Aug. 14 at Oxford Racquet Club, 20 miles north of Pittsburgh, in a under-16s tournament.

“I didn’t want to bring in any nervousness to my states match,” Matriccino said. “I was pretty nervous playing her again. I knew I had lost to her. I wanted to do the best I could against her and I didn’t want to be playing and think ‘I hope I don’t lose again.’ You can’t think that way against people who have beaten you.

“I was so determined. It was some of the most determination I’ve ever felt.”

That determination manifested itself in a 6-1, 6-0 blowout of Bell as Matriccino’s pivotal victory, coupled with the doubles wins of Olsen/Tiffan at No. 1 doubles and the undefeated freshmen duo of Evelyn Mejia and Alexis Luo at No. 2, gave Spring-Ford the 3-2 victory over District 7 champion Greater Latrobe to capture the PIAA 3A team championship on Oct. 31 in Hershey.

“In that state championship match against Jenna Bell, Mia just knew exactly when to put the pressure on and she was perfect on her timing each and every time,” said Spring-Ford head coach Todd Reagan. “Again and again, she just delivered the winning punch at the perfect time over and over again. It was awesome.”

The PIAA team title culminated a remarkable year for Matriccino and the Spring-Ford team, which ran the table in PAC play (8-0) and won its first District 1 team crown.

The clear-cut Mercury All-Area Girls Tennis Player of the Year, Matriccino went 20-1 on the season, all 20 wins coming in straight sets. Her lone loss came in the District 1 singles tournament final when she fell in straight sets to two-time PIAA singles champion Amelia Honer, a senior from Council Rock North. The Spring-Ford girls tennis team poses with the PIAA championship trophy after winning the 3A team title over Greater Latrobe at Hershey Racquet Club.

Matriccino entered her first foray into playing on a team – something outside the norm for junior tournament players who generally toil individually – with humble hopes that grew through success.

“I was definitely hoping to go for No. 1 singles and I wanted to be able to get recognized by colleges,” she said. “That was one big thing that my coach told me about for high school. District singles and PAC singles were also goals. I ended up being a finalist at districts which was really good.”

Her biggest highlights, though, were team-related.

“States was really awesome. I loved going there with the team, it was a lot of fun. Districts was pretty awesome too because everyone was there and we were all super excited. Those were definitely the best part of the season.”

Matriccino felt her play took major strides forward as summer turned to fall and the results showed. Most of the progress came between the ears, she says.

“During the summer I was having a hard time with my intensity. I wasn’t intense enough in the point,” Matriccino said. “One day my mom (Jodi) showed me an article about intensity and it just clicked for me, how to do it. That week and ever since I was building on that.”

Matriccino credits the focus and training program CP Elite, developed by the father and brother of nine-time Grand Slam doubles champion Bethanie Mattek-Sands, for the strides in her mental game.

Matriccino first picked up a racket at age 8, her parents Mario and Jodi, who Mia says have athletic backgrounds but not as serious tennis players, taking her to a clinic at Frog Hollow Racquet Club in Lansdale, where she still trains year-round.

Equipped with a powerful serve, unflappable forehand and picturesque one-handed backhand, Matriccino’s ability was admired by teammates, even the seniors.

“I think she knows we all look up to her,” Olsen said. “I was really impressed with how encouraging she was being a freshman and that she’s never played on a team before; she’s always been an individual. Her confidence gave us confidence and it really made a difference.”

After such a debut, it’s apparent the admiration of Matriccino is only beginning.