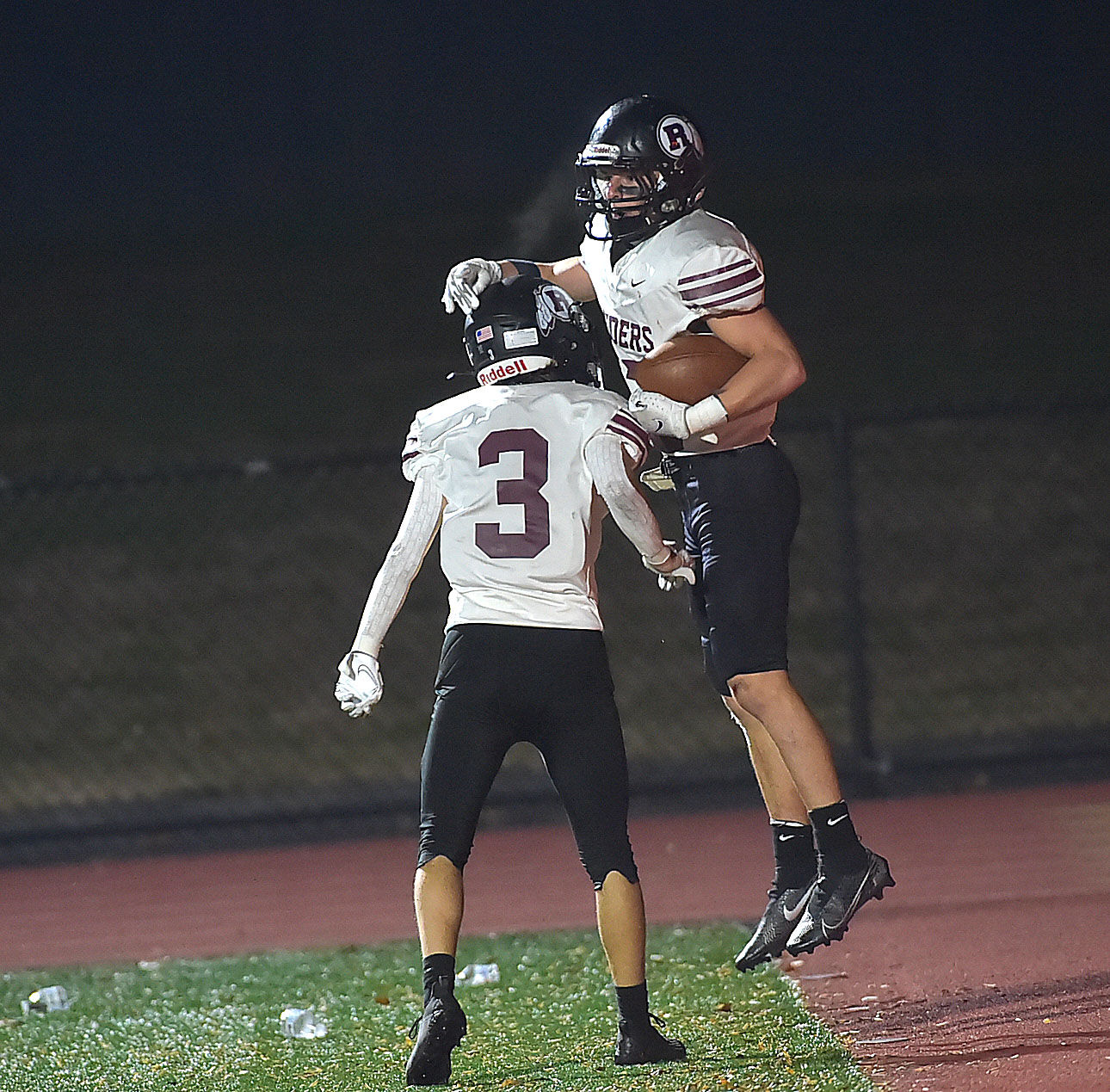 RIDLEY TWP. — Thomas Hannum and Mark McKeon practiced the exact play every day at practice since they were freshmen.

McKeon runs a hitch route about 10 yards deep and Hannum hits him in stride. It’s their play.

In Hannum’s first varsity start at quarterback Friday, he connected with his buddy McKeon for a touchdown. And it was a pass-and-catch the seniors won’t soon forget, the one that got their team on the scoreboard and on the way to an emotional 12-7 victory at Ridley’s Phil Marion Field to close the 2020 season.

“What a lot of people don’t know is we’ve been doing this for four years,” McKeon said. “Me and Tom, after every practice, we would throw extra reps and out-and-up was our play. Every day we put in extra reps and it paid off in the biggest moment of our high school careers.”

Radnor coach Tom Ryan informed Hannum he was starting at quarterback for the first time after J.P. Moreland, who is the team’s No. 1, was hobbled by an injury throughout the week. Moreland was ranked as the second-leading passer in Delco entering the week.

The call to Hannum paid dividends for the Raiders. Hannum played with confidence and smarts. He showed tremendous athleticism running the ball (79 yards on 12 carries). and completed 7 of 17 passing attempts for 100 yards. The most memorable pass, of course, was the touchdown to McKeon to put the Raiders ahead 6-0 in the third quarter.

Radnor effectively the iced the win — its second against Ridley in three seasons — when senior running back Scott Belveal broke off an 80-yard scoring run with 4:32 to go. Belveal was a bulldog for the Raiders all year and carried the offense once again Friday night. He gashed the Ridley defense for 223 yards on 30 carries.

Radnor’s Scott Belveal takes the ball 80 yards to put Radnor up 12-0 late in the fourth quarter. Belveal had 223 yards rushing in the season finale against Ridley. (PETE BANNAN/MEDIANEWS GROUP)

“We said at halftime that we have 24 minutes left and then it’s over,” Belveal said. “I think our O-line played tremendous all season and definitely tonight. To be honest, I’m just running the ball. It all starts with the line. Coach (Brian) Ross, who is our line coach, said that everything starts with them. We can’t be successful without them. They brought the energy and the intensity and we kind of fed off it.”

“I can’t really describe it, I’m just so proud of these guys for battling,” senior lineman Duncan McDermott said. “Tom stepped up in the biggest moment of his career and balled out. What more can you ask for?”

Radnor’s defense was stingy all night and forced three Ridley turnovers. If not for a 53-yard touchdown pass from Shaun Kennedy to Tahir Mills with 19 seconds to play, the Raiders would’ve had a well-earned shutout. Belveal and Damian Falcone flourished at linebacker and Jahmir Dixon and Reece Evans were excellent in the secondary. Jack Codran and Keaton Monaghan were among the standouts on the line.

“All year we’ve met some pretty strong offenses, but we’ve never backed down,” said Evans, who was named co-captain one year after transferring to Radnor all the way from Colorado. “They’re going to punch us, but we’re going to punch them back. I was thinking we can punch harder tonight.”

Dixon jumped a slant route to intercept Kennedy deep inside Radnor territory in the fourth quarter. Kodi Nixon had an interception in the first half for the Raiders.

Ridley was led offensively by senior running back Gavin Kingsborough, who produced 112 yards on 22 carries.

Ryan choked up while speaking to his team in the post-game huddle. This was a trying year for everybody, but the Raiders never came unglued. Ryan’s guys showed up every day to voluntary practice in the summer, not knowing whether they’ll have a season at all. They went on to have a successful 4-2 record, taking fifth place in the Central League.

“The scariest part for me was every Monday expecting a call from my athletic director that we’re shut down,” Ryan said. “I’m a grown man, but to put that in a bunch of 17-year-old’s mindsets was a scary thought. The kids would text me every day, ‘Anything?’ and I would say, ‘Guys, we’re good. We can get through this week.’ And so we approached it, especially with COVID, one week at a time because we didn’t know.

“I can’t believe we got through six games, but it’s a testament to these guys wearing the masks in practice and doing it the right way. My boss told me if we don’t do it, they’re going to take it away. These guys listened to us and we got to game six.”