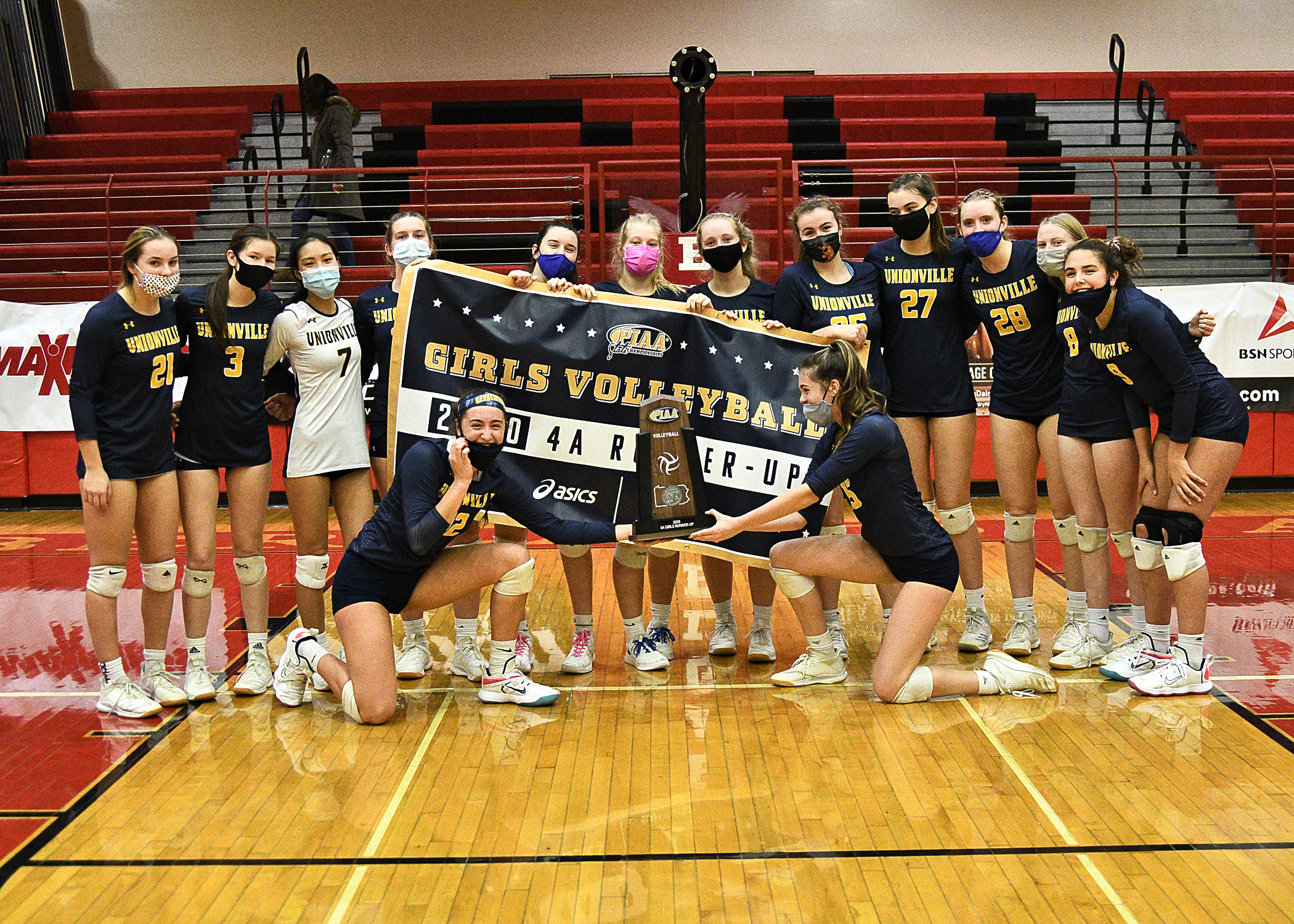 Unionville players leap to try to block a reverse shot at the net Saturday against North Allegheny. (BILL RUDICK – FOR MNG)

“North Allegheny has been in this position multiple times before,” said Unionville head coach Stephanie Smith. “They came out a little bit calm, and we came out with some nerves, and it took us a little time to get caught up. We knew defense was going to win this game, and North Allegheny had some big hitters that we were unable to shut down.”

The leading hitters for North Allegheny (18-0) were a couple of All-District 7 outside hitters, senior Paige Miller and sophomore Mia Tuman. Both of them came up with some big hits when needed, particularly in the second and third sets.

North Allegheny head coach Heidi Miller said, “I was nervous coming into this game. Unionville is big and very offensive-minded. We try to strike that balance of offense, IQ, finesse and smart play. I think we served and passed very well tonight, and Unionville had a lot of offensive weapons that [I’m sure] they didn’t get to really showcase. When Unionville hit, it was hard for us.”

In the opening set, Unionville hung with North Allegheny, and though they never led, cut the Tigers’ lead to 9-8 on some strong hitting by standout senior outside hitter Sophie Brenner and some solid play up front by middle hitters Emily Harper and Genna Weeber. North Allegheny came back with a 7-1 run, led by the hitting of Tuman and Paige Miller, to take a 16-9 lead. And despite some potent play late in the game from Unionville sophomore outside hitter Maddy Lowe, North Allegheny rolled to a 25-14 opening-set win.

In the second set, Unionville fell behind quickly, 5-0, but battled back and went on a 5-0 run of their own midway through the set to cut the Tigers’ lead to 13-12, thanks to some North Allegheny errors and a well-placed tip-in by Harper.

After North Allegheny went up 19-14 behind a couple of potent Tuman hits and a well-placed tip-in by All-District 7 senior setter Paige Morningstar (a Louisville commit), Unionville stormed back to twice come within two (22-20 and 24-22), the first time on a Brenner kill and the second time on another Harper tip-in. With the Tigers leading 24-22, Paige Miller’s kill clinched the hard-fought victory.

“We made some nice runs tonight, but I think we’re really not used to this situation,” said Brenner, who will be playing volleyball for Loyola (Md.) University next year. “But we never gave up, that’s kind of our goal, to always play our best no matter what. We were all kind of nervous tonight, which is alright.”

“Sophie put everything into the game tonight, and I tried to put as much as I could into it,” said senior setter Ashlyn Wiswall, the quarterback of the Unionville offense.

In the third set, Unionville took its first lead of the match, and built their advantage to 9-6 on some fine hitting by Brenner and Lowe, and strong play up from Webber and Harper. Late in the third set, North Allegheny’s 6-foot-2 junior middle hitter Jadyn Perkins made her presence felt at the net, and combined with a couple of Paige Miller kills, the Tigers worked their way to a 25-20 win and their fourth consecutive PIAA 4A state title.

“I’m proud of how far we came this season,” said Wiswall a few minutes after talking to some Unionville fans who came to Cumberland Valley. “That’s the only way to look at it. We didn’t even know if we’d have a season, and we got to state finals for the first time ever. From the JV baseball field [in pre-season practices] to the state finals.”

Smith said, “Our team this year had a lot of energy and love for the game and drive. They came to play outside just to start the season, and then when we were finally allowed to play they were so driven and so excited. We weren’t even allowed into the building until October, so it was a very short season, a quick season, but our girls made the most of it, they really did.”

Brenner said, “I’m really proud of the way everyone played, and I think it was still a good way to end our season.”

The only two seniors on the Unionville squad were Brenner and Wiswall, and when Sophie was asked what kind of legacy she hopes the two UHS seniors left, she responded, “I hope we leave a legacy of having fun together, and never giving up, and playing as a team always. I hope that’s our legacy.”