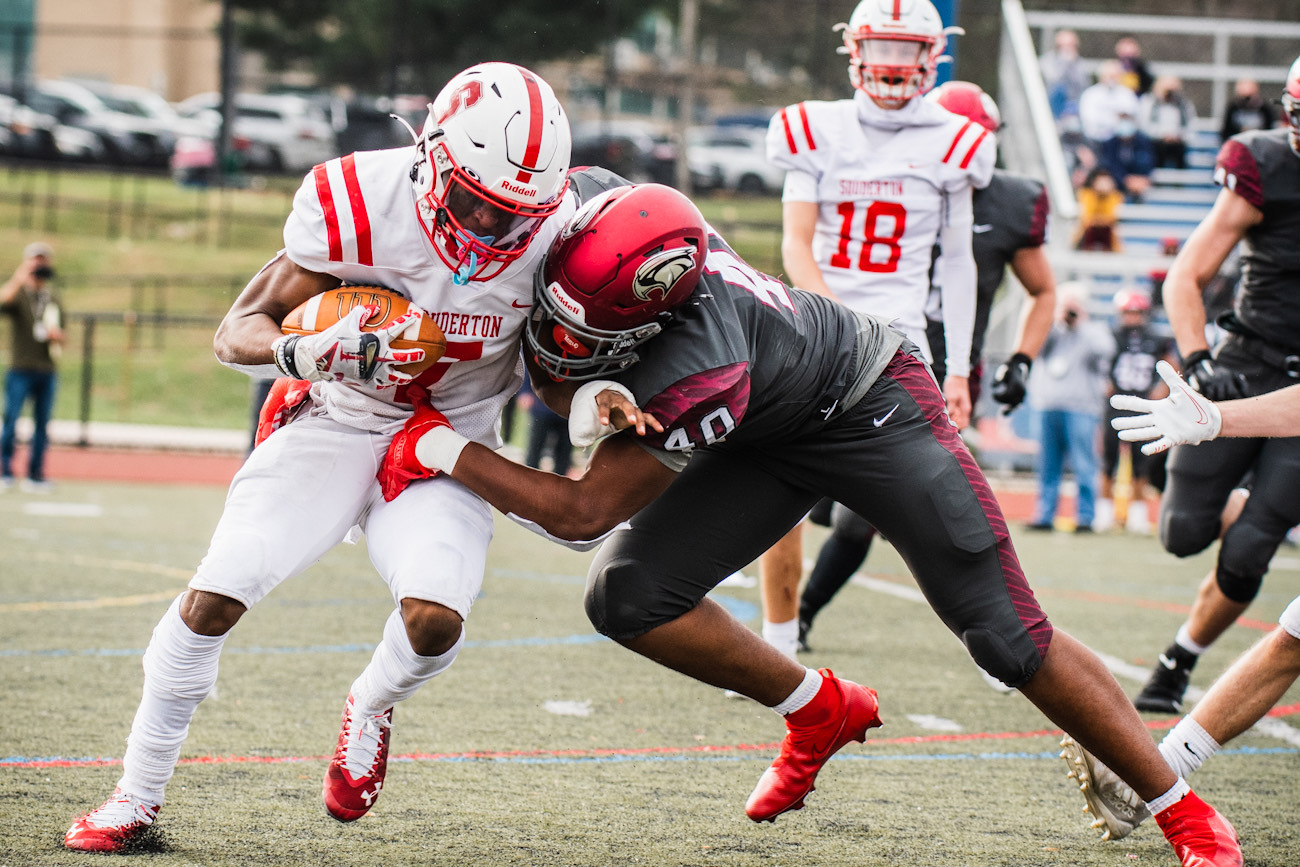 MARPLE >> It was a first-half performance expected from a football team seen as one of the best in the nation.

McCord threw six touchdown passes before halftime as the Prep went out to a 44-7 lead at the break. And just seconds into the third quarter, the margin increased to 51-7 after Malik Cooper returned the second half’s opening kickoff back for a touchdown.

While the final outcome ended up in favor of the two-time defending state champ Hawks, Souderton did not go quietly. “They’re an outstanding football team – no one can take that away from them,” said Souderton coach Ed Gallagher of Prep. “But I was just happy and proud of the kids and their effort, especially in the second half. They could of said ‘All right, they’re better we’re moving on,’ but they decided to just play. And they played and they played and it’s a great football game, it’s a great football team and we just lost to a better team.”

Battling until the very end of the mercy-rule running clock in the second half, the Indians scored the game’s final 36 points but Big Red’s first-ever trip to the state semis ended in a 51-43 loss at Cardinal O’Hara.

“They’re a really good team so we’re trying our best but I love how we came back that second half,” Souderton senior quarterback/safety Evan Kutzler said. “The seniors, at least, this is our last two quarters so we went all out, everyone put it on the line for each other, sacrificed and we put up a fight.”

“So I’m just really proud of this team, proud of my teammates, proud of the rest of the seniors and it was a great second half against a really good team so I couldn’t of asked for anything better.”

Playing its first game in two weeks, St. Joseph’s Prep (5-0) showed no rust, running 10 offensive plays in the first quarter and scoring touchdowns on four as the Hawks – ranked third in the nation by both Maxpreps and USA Today – built a 30-0 lead after the first 12 minutes.

“For two weeks, we’ve just been working, waiting to see who we’d play and came out here and performed as we should,” St. Joe’s Prep’s Sahmir Hagans said. “We hold ourselves to a standard so that’s what we did.”

Prep, however, answered by going 64 yards on eight plays – the last one having McCord connect with Reese Clark for a 3-yard TD at 26.0 seconds as the Hawks rolled into intermission up 37.

McCord, who played just the first half, was 11-of-20 passing for 191 yards, six TDs one interception – a pick by Kyle Bob in the end zone off a deflection. Three of McCord’s scoring throws went to Hagans while another two were hauled in by fellow Ohio State commit Marvin Harrison, Jr. as Hawks earned a chance at a state Class 6A three-peat in Hershey Saturday. Prep faces District 3 champ Central York, which topped District 10 champ McDowell 37-21 in the other semifinal at Altoona High School.

“We had a little shorter season than usual but we’ve been working out since summer, restrictions and all we always kept ourself safe,” Hagans said. “We’ve been waiting for this moment so we’re finally here.”

St. Joseph’s Prep is making its fifth consecutive appearance in a PIAA final and seventh in the last eight seasons. The Hawks are looking to win the program’s sixth state crown.

Cooper’s 85-yard kickoff return TD to open the third provided the Hawks their final points of the afternoon. From there Souderton found offensive success through its passing game, Kutzler throwing a trio of TDs after the break – two to Shaun Purvy – as Big Red reached the end zone five times in the second half.

“They still had seven starters out on defense when we scored our third touchdown so to me we scored three times against their starters,” Gallagher said. “And again unfortunately we had to do it throwing the ball and that’s what I said, still credit to them for what they did cause they did stop us and force us out of our comfort zone.

“But, hey, our kids fought. Our kids didn’t quit. I couldn’t be more proud of this group.” St. Joe’s Prep’s 44-point first half was helped by advantageous field position – the Hawks’ first six series began from the Souderton 36 or better with five of the drives ending in touchdowns. Two TDs were set up by a fumble recovery and an interception while another came after the punt block. A second punt block by the Hawks resulted in a safety.

“I credit (defensive coordinator) Mike Heath every week cause we have a really good defense but I don’t know what you’re supposed to do with that team,” Gallagher said. “I mean, seriously. They didn’t even try to run the ball to be honest with you cause they didn’t have to. I mean we’re trying to stop the pass and they’re just – yeah, they’re really, really good.”

A punt block led to Prep’s first touchdown as McCord found Hagans for a 25-yard score at 9:45 in the first quarter. Bob intercepted McCord in the end zone on the Hawks’ next drive but three plays later the Indians fumbled the ball back to Prep at the Souderton 10. A McCord-to-Hagans 10-yard TD pass made it 14-0 at 5:03.

The Hawks tacked on two more after Julian Talley blocked a Big Red punt and Souderton knocked the ball out of the end zone for a safety at 2:45. A Matthew DuMond interception led to the Hawk’s fifth TD drive – McCord finishing a 7-play, 26-yard series with a two-yard TD pass to Hagans at 7:36 in the third to go up 37-0.

Kutzler’s 3-yard TD run on a QB keeper made it 37-7 before McCord found Reese for a 3-yard TD pass in the second quarter’s final seconds. Cooper’s 85-yard kickoff return to begin the second half extended Prep’s advantage to 51-7.

After the Hawks’ Cooper began the third with his kickoff return TD, Souderton made it 51-14 after recovering a fumble at the Prep 26 as Bob hauled in a 31-yard touchdown pass from Kutzler at 6:56 on a 2nd-and-15. After Big Red recovered an onside kick, Kutzler hit Purvy behind the defense for a 48-yard TD at 6:15.

Jalen White pulled the Indians within 51-28 with a 3-yard touchdown run as time expired in the third quarter.

In the fourth quarter, Kutzler rolled right on 4th-and-24 and hit Purvy for a 33-yard touchdown with 3:49 remaining. Kutzler’s shovel pass to Sean McGoldrick on the two-point conversion got Big Red within 51-36.