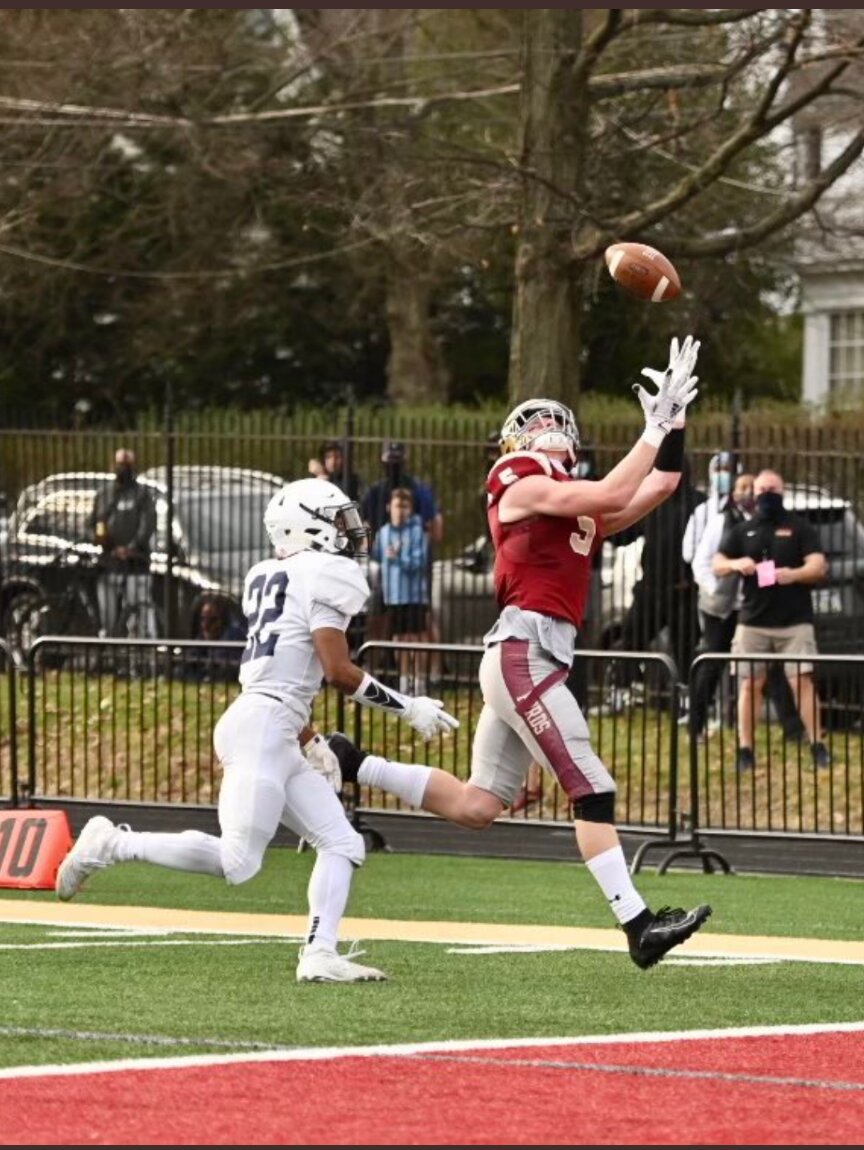 Matt Rosato catches the first of two touchdown passes in the second half of The Haverford School's 13-12 victory over Episcopal Academy Saturday. (PHOTO CREDIT: @PhillySportsDigest on Twitter)

AVERFORD — Sometime after he transferred from Radnor prior to his junior, Matt Rosato pictured himself celebrating a victory on Haverford-EA Day.

The 6-3, 190-pound senior tight end never predicted the celebration would occur in the finale of a three-game season that was shortened significantly due to the coronavirus pandemic. Rosato is like every senior football player in the country who wishes he could have played a full season in 2020.

There was no championship on the line Saturday. After Malvern Prep bailed out of league competition to pursue a nonleague schedule, the Inter-Ac did away with championships this fall. Saturday’s rivalry game certainly deserved to have something at stake other than bragging rights.

Nevertheless, Rosato and the Fords were able to go out winners against Episcopal, something the Haverford School hadn’t accomplished since 2016. Rosato caught a pair of touchdown passes from Gavin Wright to help the Fords defeat the Churchmen, 13-12, at Sabol Field.

Matt Rosato with the 21 yard TD catch from Gavin Wright. We have a score!!! 7-0 @FordsFootball 6:40 3Q#delcofootball pic.twitter.com/fJLwWGN73J

“When I first visited here, all that was talked about is EA Day and the tradition,” Rosato said. “Coming here last year, and losing this game last year at EA, we’ve been waiting a year and 11 days just for this. It’s incredible, and I’m so happy we were able to finally win this. We’ve been talking about beating them for a long time.”

The ending was pretty chaotic. Rosato’s second TD catch from six-yards out extended Haverford’s lead to 13-6 with 1:57 to go. Haverford went for two points to make it a two-possession game, but couldn’t convert. Episcopal quarterback Jake Fant and the Churchmen offense went to work. Fant connected with Jake Jasczsz on a 25-yard pass, then found TJ Lamb for a 10-yard touchdown pass with no time left on the clock. EA coach Todd Fairlie rolled the dice and went for the win … what did either team have to lose? Billy Adams, EA’s senior running back who dominated in the second half, was given the handoff but met around the one-yard line by linebacker Louie Atkinson and several other Fords.

“I knew it was me and him,” Atkinson said. “I had my teammates there, too, and I knew we had to make the play and hold him right there.”

At some point, before the play was whistled, Adams gave the ball to Dylan DiBeneditto, who emerged from a pile of players in the end zone with the ball, celebrating what everyone on the EA sideline thought was a successful two-point conversion and a walk-off win. But officials told Fairlie that they determined Adams had made an illegal forward pass to DiBeneditto.

“It is what it is,” Fairlie said. “This was a great football game. You know, we could’ve done things better. We missed an extra point (in the third quarter) and it came back to bite us. We made a lot of mistakes … but it was great for the kids to come back the way they did and fight back and finish the game, so I think we can take a lot from this. It’s unfortunate the way it ended, but we had our guy (Adams) at the end there and I thought he made a great play to give the ball to someone else. … They said he threw it forward and they blew it dead, but I’m not sure if they actually settled on one explanation. (DiBeneditto) was already seven yards deep in the end zone when they blew it dead. So, you know…”

Adams ran for 105 of his game-high 124 yards after halftime.

Game-ending controversy is nothing new to Fairlie and the Churchmen. A year ago they lost at Germantown Academy on a Philly Special-type of play that included an illegal forward pass. That time, the officials missed the call. Saturday was a frustrating way to end the season, but at least the Churchmen will enter the 2020 offseason as reigning Inter-Ac champions from 2019.

The first half was a bit of a snoozefest as both defenses were in complete control. Haverford quarterback Michael Benincasa had to leave the game after a sack by DiBeneditto in the second quarter. Sophomore Gavin Wright, the Fords’ third signal caller in three weeks, stepped in and looked nothing like a third-string quarterback. Wright completed 7 of 10 passes for 61 yards and a pair of TDs in the second half. Not bad for a kid getting his first real playing time on varsity.

Senior co-captain Chris Sims, who recently committed to Bucknell for football and track and field, was proud of the way Wright handled the adversity.

“After Mike Galasso got hurt (in Week 1), Gavin was ready. He was the first person to text me and say, ‘Yo, let’s go throw and get it going.’ Benincasa did a great job when he was in as well, but Gavin really gritted through that for himself and the team,” Sims said. “I said back in the summer that this was the biggest game in my 14 years at Haverford and I really meant that. Our team came into practice this week like they’ve been waiting 14 years for it, too, and we prepared very well. Everybody on the team, especially the seniors, really earned this win.”

Injuries forced Sims to move from wide receiver, where he’s played his entire career, to running back this week. The Bucknell recruit finished with 33 yards on eight carries and had a big 50-yard punt return. Sims backed up lead rusher Mekhi Ajose-Williamson, who amassed 73 yards on 13 carries and came through with several big gains in the second half to help the Fords move the ball and set up Wright’s touchdown passes to Rosato.

Junior lineman Bill Brosko, an All-Delco wrestler, had three sacks. He was involved in the scrum on the final play of the game, too.

“This whole game was for the seniors,” he said. “It was for the seniors and the alumni and it was amazing to win. I didn’t know the rivalry before I came here (after transferring from Marple Newtown), but I learned a lot about it. It’s amazing. This is a game I’ll remember for a long time.”