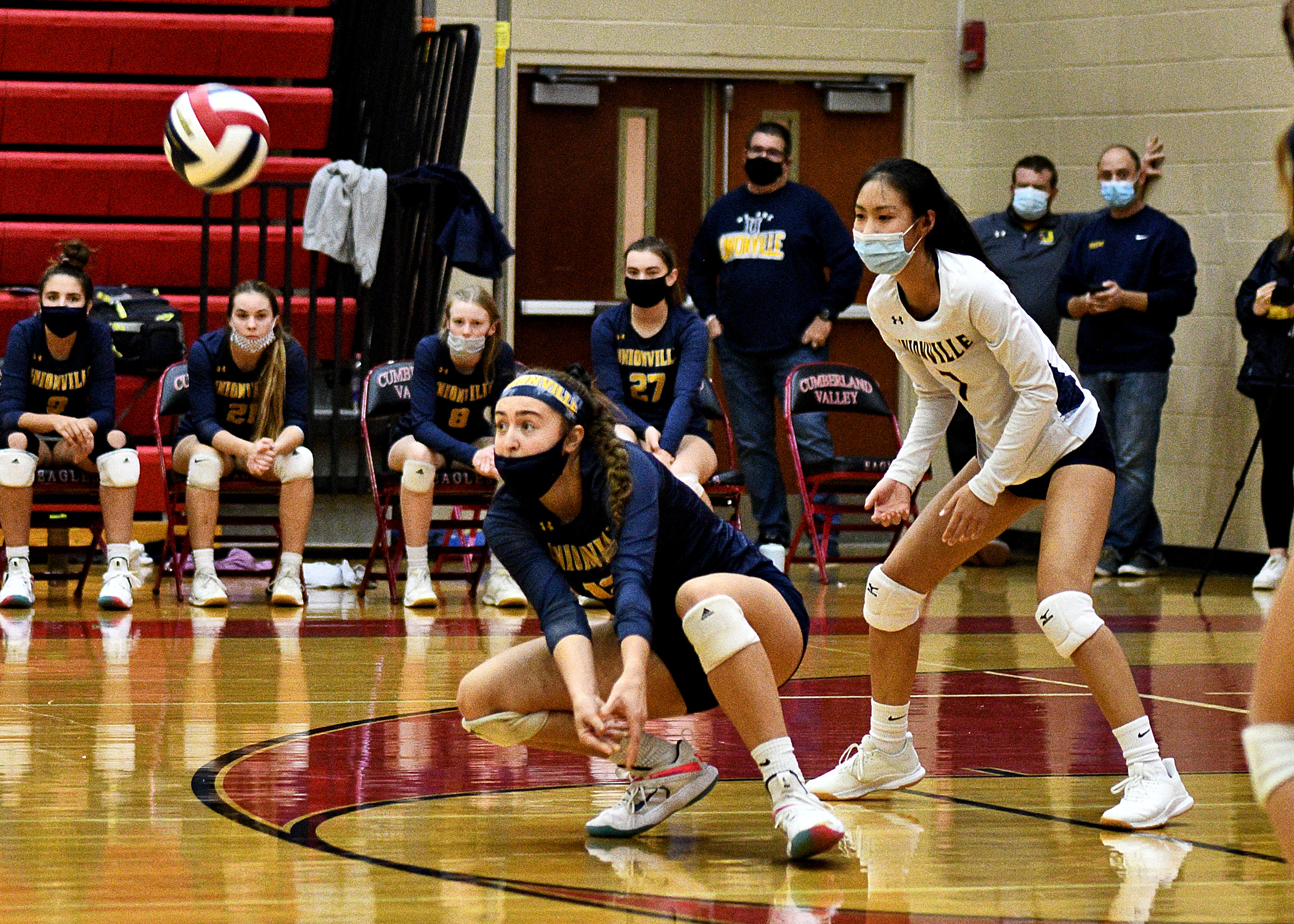 MECHANICSBURG >> On Saturday, it was over much quicker than anybody wearing blue and gold could imagine. But in the grand scheme of things, the 2020 volleyball season lasted a heck of a lot longer than anybody at Unionville could have possibly hoped for.

The greatest volleyball season in school history ended with a 3-0 sweep in the PIAA Class 4A State Championship Game to powerful North Allegheny, a program that has now won four crowns in a row. But afterwards, despite the disappointment, Unionville’s head coach and team captains were just grateful for the chance to play this abbreviated season. “We didn’t even think we were going to have a season, so we are so lucky we got to play at all,” said senior standout Sophie Brenner.

“It was a great season and I am just so happy to be their coach,” said mentor Stephanie Smith.

Just two months ago, Smith and company weren’t even allowed in the Unionville gymnasium due to coronavirus concerns. In late August, the Ches-Mont announced that the season was being suspended, and it wasn’t until a month later that a plan was formulated for the season to begin in early October.

“Two months ago we were practicing outdoors on grass courts, not knowing if we were even going to get a chance to play this season,” said senior setter Ashlyn Wiswall. “So to make it to the state final is a great accomplishment.”

Along the way, this group proved it was more than willing to endure and overcome every hurdle put in their path just to be able to compete this fall in the midst of a pandemic that has taken more than a quarter million lives so far in this country alone.

“We were very lucky and fortunate, but that doesn’t mean I wasn’t super-stressed every day,” Smith acknowledged.

Every step of the journey, Unionville played the 2020 season, both during matches and practices, with masks firmly affixed to their ears. For a portion of society that has resisted doing this in public because it’s inconvenient, can you imagine the challenge of wearing a mask while trying to compete athletically at the state’s highest level? “We wear masks all the time and try to limit exposure,” explained Wiswall, a captain.

“It can be hard to catch your breath sometimes. But my mask kind of falls off sometimes, and it’s a little difficult to have it on when you’re talking to teammates. But we do it to keep everyone else safe.”

Parkland didn’t wear masks on the court in the state semifinal on Tuesday, and yet Unionville still prevailed, 3-1. And neither did North Allegheny. According to the competitors, it wasn’t really a factor. But it was emblematic of a program doing its best to do things right.

“We weren’t required to wear masks — we knew it was the correct decision,” Smith said afterwards. “Want to keep each other safe and everybody else around us.”

For Unionville to get all the way through this abridged season without a single major COVID-19 hiccup is actually quite astounding. The team finished with a 14-1 record, and grabbed a league and district title along the way. And although none of UHS’s matches were cancelled or postponed, the squad was without three starters who were required to quarantine during the first two outings of the district tournament.

“It’s a very special team with a special group of girls,” Smith said. “This was their dream and they did everything they could to make it happen.”

“We’ve definitely gotten used to the masks,” Brenner added. “It was a little weird seeing our opponents not wearing them, but it really didn’t make much of a difference.”

Keep in mind that volleyball is fall’s only indoor sport, and yet Unionville managed to stay healthy, kept on playing and kept on winning. The same can’t be said for a whole slew of other fall teams, including Unionville football and girls’ soccer, who were forced to bow out of districts.

Playing and practicing in closed confinement for two months without missing a contest is close to miraculous during these dark days. It is just another example of this squad’s total commitment to achieving a shared goal. “We were all OK with sacrificing because we love this team so much,” said Brenner, the other captain. “This whole season we haven’t really seen anyone except each other.”

Smith added: “Every day I kind of held my breath because you never know what can happen. But these girls were so committed to the team that they sacrificed so much. They didn’t go out on weekends, they didn’t hang out with friends because they wanted this to happen.”

Wiswall and Brenner were at the forefront, constantly reinforcing the idea that if the team can stay healthy, the team can continue to play volleyball together.

“We just didn’t go out,” Wiswall said. “It definitely took a toll on my social life, but it was worth the sacrifice.”

Don’t forget, it was also the program’s first-ever trip to the state final. Yes, UHS looked a bit wide-eyed at the start, but it was mostly just going up against a premier foe that has one of the most accomplished high school programs in the country.

All of the discipline and focus of the last few months led directly to Saturday’s championship appearance at Cumberland Valley High School. Unionville seemed to get better with every set, but ultimately fell 14-25, 22-25, 20-25.

Chester County’s other volleyball powerhouse, Bishop Shanahan, fell in straight sets against North Allegheny in the title game in 2017 and 2018 before taking the Tigers to the limit a year ago only to fall in five.

“I am really happy the way my senior season turned out,” Brenner said.

“We were able to overcome a lot of obstacles, and that just shows what a strong team we have,” Wiswall added.

“This is the farthest we’ve ever gone as a program. No matter what happened today, that is rewarding.”