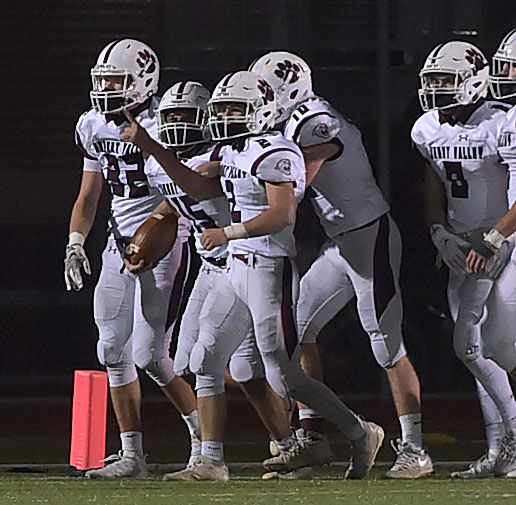 Garnet Valley's Alex Nicolaides (15) celebrates with teammates after his interception return for a touchdown in the fourth quarter of the Jaguars' 39-8 win over Haverford. (PETE BANNAN/MEDIANEWS GROUP)

HAVERFORD — When Alex Nicolaides intercepted a pass in the fourth quarter Friday night, the Garnet Valley co-captain thought he could return it all the way.

That’s not a problem for Nicolaides, one of GV’s speedy defensive backs who helped steal the show against Haverford High. In a game that determined the Class 6A division’s representative in next week’s Central League final, the Jags leaned on their power running game and their excellent defensive secondary to pull out the victory.

“I knew I had my boys out there, ready to block for me,” Nicolaides said. “Our defense just flies to the ball. As soon as we see a pick, it’s let’s go, we’re going off running, and everybody starts heading to the end zone until we’re in there.”

Garnet Valley (5-0) will play for the Central League championship Wednesday night at home against Marple Newtown (5-0). The Jags are vying for their third consecutive title.

Late in the first half, when the score was much closer, Max Busenkill intercepted sophomore quarterback Tommy Wright in the end zone to thwart an impressive Haverford drive. At the time GV was clinging to a 16-8 advantage.

“They gave us a fight, especially in that first half,” said Shane Reynolds, who opened the scoring with a 50-yard touchdown run in the first quarter. “We took the challenge head-on and I think we overcame it. I think we were really excited to play them and we were ready for the challenge.” Garnet Valley quarterback Kevin McGarrey, right, dives to score the first of his two touchdowns in the second half Friday night as the Jaguars defeated Haverford. (PETE BANNAN/MEDIANEWS GROUP)

After George Moscony picked off GV quarterback Kevin McGarrey in the end zone in the waning seconds of the first half, Haverford felt pretty good about its chances at intermission.

But Garnet Valley executed a perfect onside kick to start the third quarter, a turning point in the game. The Jags would score 23 unanswered points in the second half against a Fords defense that allowed only 17 points all season prior to Friday.

GV’s offense controlled the tempo — as it normally does — by running the ball. On this night, it was Reynolds and Brian Bradley who carried the load. McGarrey also had a pair of keepers go for big games and ran for a pair of touchdowns in the second half. In the end, GV’s offensive line and ground attack grinded down Haverford’s stout defenive front.

In recent weeks, coach Mike Ricci has entrusted McGarrey to air the ball out. In fact, both McGarrey and Reynolds were among Delco’s leaders in passing and receiving yardage, respectively. For a Ricci-coached team, that’s … unusual.

Friday night, the Jags got back to the basics and leaned on their excellent ball carriers. Reynolds gained 89 yards on 13 carries, while Bradley amassed 78 yards on 21 carries.

“They’re a great team,” McGarrey said of the Fords. “They knew exactly what we wanted to do and stopped us in the first half. They did a great job and they stopped the pass really well. Their defensive backfield did an awesome job, but we just came back and we changed it up a little bit, just pounding the ball like we usually do. We went back to our roots and we were successful.”

Haverford was without head coach Joe Gallagher, who was quarantining at home after recently coming in contact with someone who tested positive for COVID-19. At halftime, Garnet Valley coach Mike Ricci sent Gallagher a text to let him know he was missing a good one. “I texted him at halftime, ‘What a great half of football,'” Ricci said. “I talked to him before the game and I told him it’s great that we had a chance to play this game at the end of the shortened regular season because our games the last several years have been spectacular. I think the last two games came down to the last play,” Ricci said. “We knew it was going to be a good football game, the kids were excited to play against Haverford because it always is such a battle and it’s a fun game to play in. They’re very physical and we know we have to play at the top of our game in order to be successful. And I was thrilled with the effort.”

Defensive coordinator Dan Milewski, who has played under Gallagher and coached on his staff for the better part of three decades, was Haverford’s interim head coach Friday.

“Garnet Valley, we all know, is a very well-coached team. They’re tough to beat,” Milewski said. “Our kids played hard. It was 16-8 at halftime and they got an onside kick right out of the half. … We mentioned it, but Garnet always tries to throw some kind of trick at you. Good teams do that to you.” Garnet Valley running back ran for 78 yards and a touchdown in the Jaguars’ 39-8 win. (PETE BANNAN/MEDIANEWS GROUP)

The Fords tried to get Jimmy Wright going, but the explosive senior running back had only one run of 10 or more yards in the first half. While he finished with 109 yards, he failed to reach the end zone and, by and large, GV’s defense did a decent job of limiting the county’s No. 1 rusher. The lack of explosiveness in the running game forced Tommy Wright, Jimmy’s brother, to attempt 28 passes, far more than Milewski and the Haverford coaching staff expected from their young QB. Tommy Wright threw a TD pass to Will Higson in the first quarter to even the score at 8-8.

Haverford will play Strath Haven in the Central League’s third-place game next week. This year’s Thanksgiving game with Upper Darby was officially canceled on Friday.

“I’m just proud of our kids, with all the adversity this year,” Milewski said. “It’s good to just be out here playing football. When you look at life, you’re just happy to be out here, and I’m happy for the kids they have the chance to play football.”