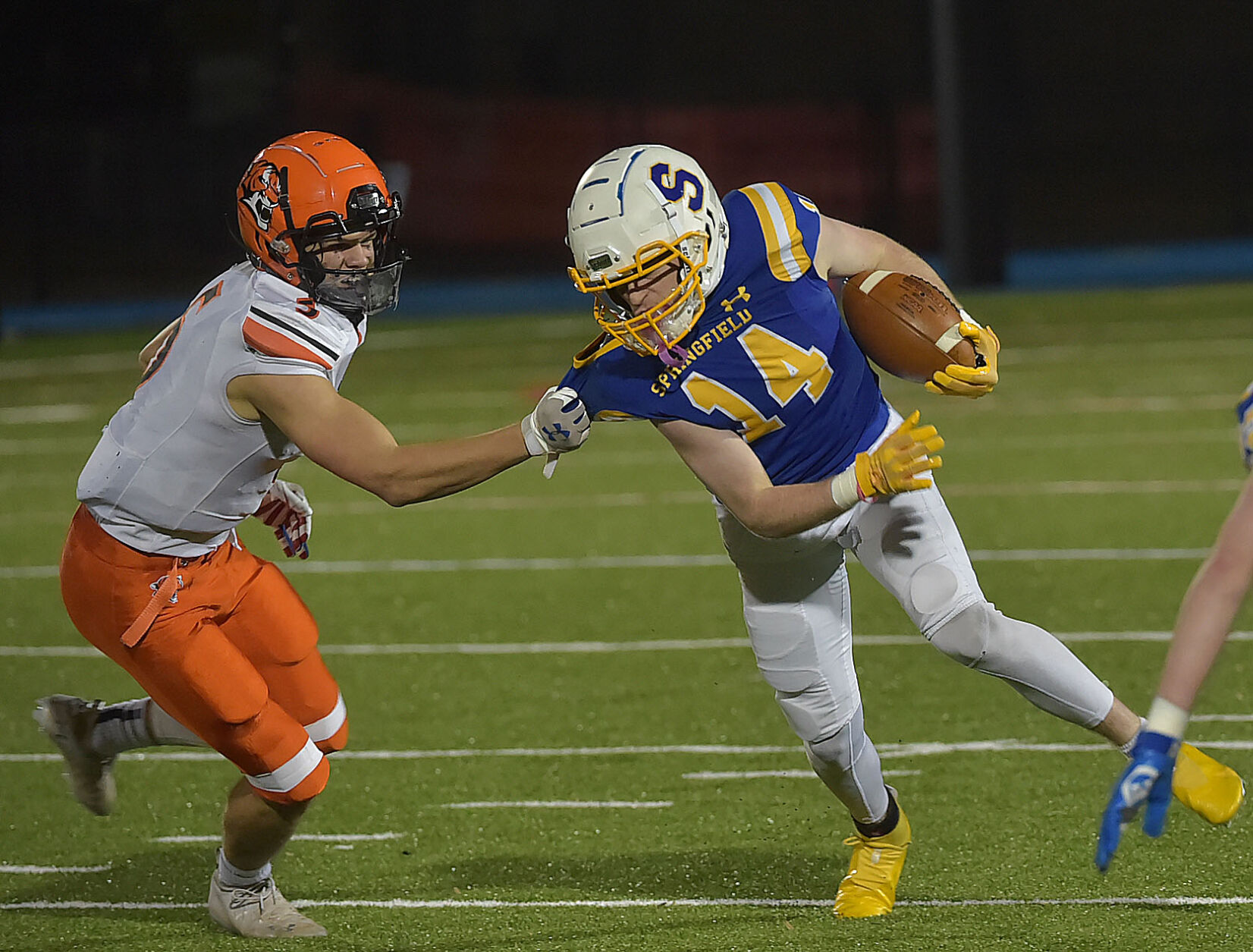 SPRINGFIELD — Marple Newtown’s lead had been threatened. Springfield had one minute in which to attempt to get into a position to be able to at least tie the score.

Tigers defensive lineman Johnnie Ebert saw the challenge presented to him and was ready to pounce and did two plays before the final whistle made Marple Newtown’s 24-21 Central League victory official Friday night.

An Ebert sack of quarterback Jake Rama, who had hit seven of eight throws in leading his team to a pair of touchdowns, forced Springfield to throw on fourth down from its 5-yard line.

The resulting incompletion and an MN kneel-down put the finishing touches on the Tigers’ fifth consecutive victory. Marple Newtown and Garnet Valley, which also is 5-0, will play for the Central League’s 2020 championship next week, bringing the curtain down on a most unusual season which has turned out to be rewarding for all who had the chance to make it happen.

“This is just huge,” Ebert said of his team’s success. “I’m not much for words. About all I can say is that this is huge.”

Ebert and his teammates led, 3-0, at the end of the first quarter then fell behind 7-3 in the second before coming back to earn a 14-7 halftime advantage.

A 14-play Tigers drive, which took up 7½ minutes, ended in the team’s third field goal of the game to open the third quarter, then Marple claimed the ball on the kickoff and used up four minutes before turning the ball over on downs.

Joey Small’s interception and return put the visitors six yards from the end zone, and 31 seconds before the third had ended the Tigers were up, 24-7.

Springfield then came back with a scoring run by Connor Roche and a Rama TD pass to Brett Gougler to cut its disadvantage to 24-21 with 6:03 to play. Jack Clark made a key defensive stop for the Cougars inside the 10 before Springfield made its last drive.

“I was ready for them to throw,” Ebert said of the third-and-four play on which he dropped Rama for a 10-yard loss. “I was just going to put it all into my rush. I got around my guy and there was the quarterback. He hadn’t thrown the ball, so I made sure I got to him.” Marple Newtown’s Johnny Small is run out of bound by a Springfield defender in the first quarter. (Pete Bannan/MediaNews Group)

“We got a great effort and never gave up,” Springfield coach Chris Britton said. “The fourth quarter was the best quarter we’ve played this season. What we did then showed what we could do when we put everything together.”

Jimmy O’Brien kicked field goals of 35, 36 and 35 yards and one extra point for Marple Newtown. Charlie Box (25 carries for 81 yards and five receptions for 44 yards) took a Joe Paoletti pass 25 yards for six points 18 seconds before halftime, getting key blocks from Small and Eric McKee, who grabbed the conversion pass after Box’s score.

Brian Joslin added a scoring run late in the third quarter for the Tigers.

Alex Sciarrino made a dandy reception for a 15-yard touchdown in the second quarter for Springfield.

“The credit goes to our coaches and these kids,” Marple Newtown head coach Chris Gicking said. “Springfield was tough, but we were resilient and battled our way through the fourth quarter.”