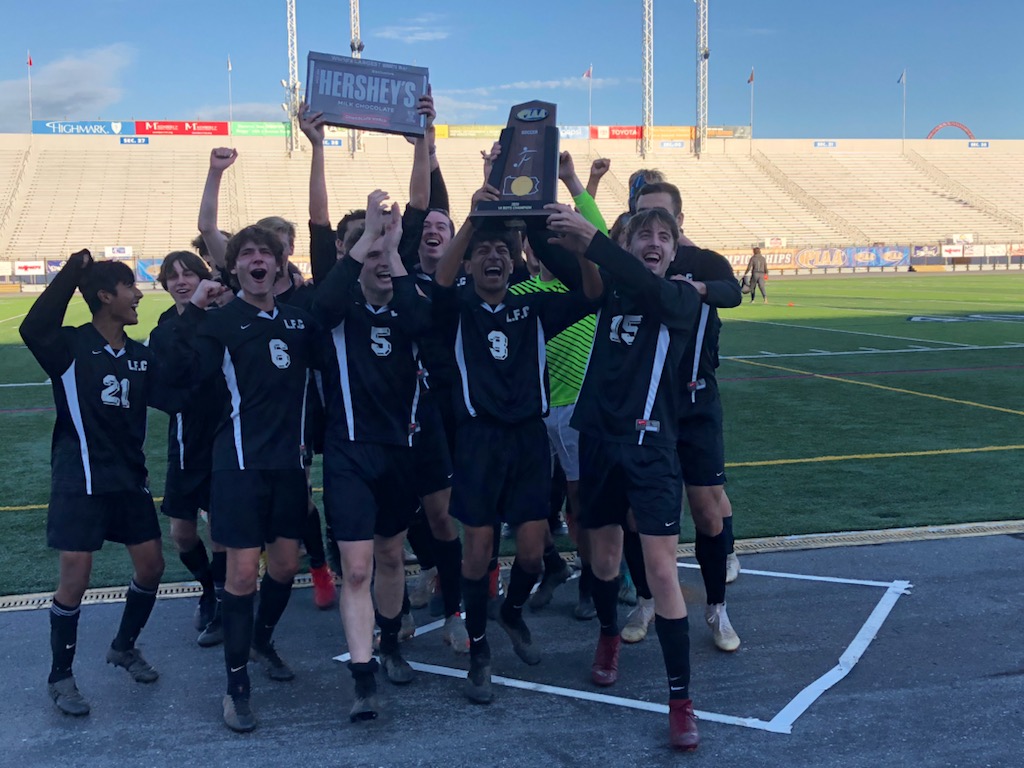 HERSHEY >> Luke Perreault felt the knot in his stomach.

The Faith Christian Academy senior had just given his team a lead in the PIAA A title game against Greensburg Central Catholic early in the second half but he and his teammates were only just getting started. A self-proclaimed second half team, the Lions put together one of their best 40 minute stretches of the fall in their biggest game.

Perreault went out with style, scoring a second half hat trick as FCA topped the Centurions 5-1 at HersheyPark Stadium.

“We got down 1-0 right away but we knew we had what it takes to come back, we’ve been a second half team all year,” Perrerault, the starting left back, said. “Our defense doesn’t let in more than one goal. It was the same thing we’ve been doing all year.”

After years of knocking on the door, the Lions (16-1) not only reached Hershey for the first time but got to go home with the program’s first-ever state title.

Greensburg CC (17-2), the District VII champion, has long been a small-school power in the PIAA and the Centurions showed their class early. Just seven minutes into the game, a through ball from Ricco Ciccarelli set Carlo Denis loose on the right side of the box.

Slipping a defender, Denis stuck a left-footed shot in for a 1-0 lead. It was just the second goal allowed by Faith keeper JR Roberts this postseason but the junior wasn’t overly worried.

Roberts made a big save three minutes later and once the Lions defended a corner and the Centurions failed to capitalize on a prime cross in front of goal, things began to calm down.

“After the first goal, we just settled down and realized we still had a chance,” Roberts said. “It was seven minutes into the game, we knew there was so much more game time left. Coach (Ryan Clymer) has told us all year we are a second half team.”

The difference, at least in Clymer’s view, was depth. After the first 20 minutes, the Lions shifted into a standard 4-4-2 formation and decided they were going to wear down the WPIAL title-holders. Every eight to 10 minutes, FCA three or four players to the line to sub in.

Among those subs was freshman Colin Moyer, who gave his team a needed spark. Off a booming long ball out of the back from Marcus Pringle, Moyer unleashed a take from about 25 yards out that sailed neatly into the net with 15:38 left in the first half.

“It’s just them, if we can keep it a one goal game by halftime, this team is going to win,” Clymer said. “I played five or six freshmen today in a state final game, which is unbelievable. Our bench is a big reason why we won.”

A minute into the second half, the Lions drew a corner. Perreault, a co-captain, takes most of the team’s set pieces and hit in the initial ball. He conceded it wasn’t his best ball, but the rebound fell to Evan Wright, who slipped it right back to Perreault.

With a touch, he juked a defender then ripped a left-footed hit just inside the box to the far post for a full broadside go-ahead tally with 38 minutes to go.

“I knew I had to go run over and thank my fans and put my first up,” Perreault said. “I’m not going to lie, my stomach kind of hurt. It was hard to believe.”

Faith dominated the second half and didn’t need long to build.

After having a shot saved five minutes into the frame, Kieran Rea cashed in when a free kick by Pringle was nodded right to his path. Rea’s bright red cleats put the ball on a yellow brick road to the back of the net, giving Faith a 3-1 lead just eight minutes into the second half.

A team with just five seniors, the Lions used an unlikely mix of freshmen and underclassmen jumping up from JV with its few returners to make history.

“Our coaches told us we had 40 minutes to prove ourselves and prove our school could do the impossible and get our first state championship,” Roberts said. “It was all our chemistry. The diversity of the group this year really helped, we had a lot of young bucks come up and fit right in.”

With their rotation of subs coming in and out at will, the Lions kept the pressure on Greensburg CC the rest of the way. While they had a fourth goal wiped out on an offside call, the Lions just kept coming.

Titus Gardner, another of Clymer’s freshmen sparkplugs, got tripped up in the box with 12:53 to play and earned FCA a penalty kick. Perreault stepped up and confidently buried the take, all but sealing up the title for his side.

About three minutes later, the Lions drew another corner and this time, the senior co-captain didn’t go to take it. Instead, he join the jumble in front as his teammates cleared the path to his hat trick heroics.

“A couple of my teammates said they knew I could get a hat trick so they let it through to me,” Perreault said. “I put it right on the money.

“I don’t really know what it was. I have a good left foot, but I’ve never had a hat trick before. This is amazing, I didn’t expect it at all.”