Unionville slips past Parkland and into PIAA volleyball title match 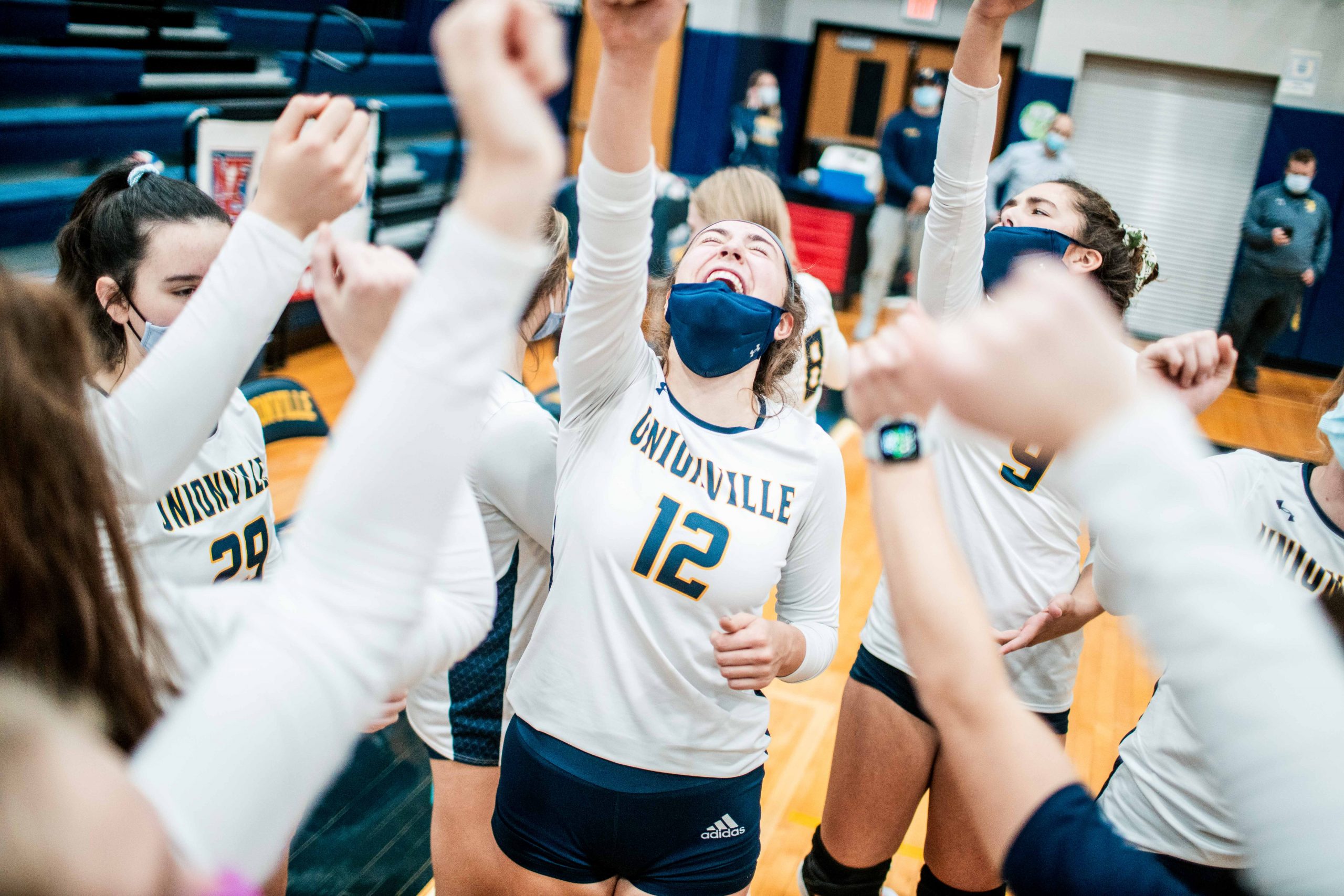 EAST MARLBOROUGH >> After Unionville captured its first district volleyball title in a quarter century last week, head coach Stephanie Smith said that anything else is going to be gravy.

If that’s the case, her squad is now ready for another heaping helping of mashed potatoes. That’s because on Tuesday Unionville earned its way into this weekend’s PIAA Class 4A State Championship Game.

“Honestly, this is unbelievable,” Smith said. “But the girls have been fighting so hard, they really deserve it.”

The only team in Chester County still alive in the fall postseason, UHS slipped past District 11 powerhouse Parkland 3-1 in semifinal action at Unionville. The squad will tackle three-time reigning state champion North Allegheny in the final on Saturday, 1 p.m., at Cumberland Valley.

“This (match) was definitely a stepping stone to Saturday going up against North Allegheny,” Smith said. “They have been the state champs for years and they are a force to be reckoned with – but so are we.

“We plan on bringing it.”

Now a perfect 14-0, Unionville’s already made history regardless of what happens on Saturday. The 2020 squad becomes the first UHS volleyball squad to win more than one state tournament contest and are the first to advance to a final.

“We wanted to make some history,” said sophomore Jillian Murphy. “If you would have asked me before the season, I didn’t think we could get this far, but this team has positive energy and confidence.”

“We liked our matchups but Unionville made some plays at critical times,” said Trojans’ head coach Mike Krause. “It’s a very good team.

In all, Parkland had a slim edge in points won, 92-91, but Unionville grabbed critically close decisions in sets one and three to pave the way. With it deadlocked 1-1, UHS led wire-to-wire in the third, but it wasn’t easy. Two of standout senior Sophie Brenner’s seven kills in the set gave Unionville a 19-15 cushion. But it wasn’t secured until a big kill by junior Genna Weeber at 24-23.

“The third set was super-important and that helped our energy for the fourth set,” Murphy explained.

In the fourth, UHS raced out to an 8-2 lead and never gave it back. Down the stretch, Unionville got three kills from Brenner, two mores from sophomore Maddy Lowe and critical late blocks by Weeber and Emily Harper. And for the final two points, libero Emma Yin delivered back-to-back aces.

“To beat these good teams we have to be well-rounded and be willing to use it,” Smith said.

“We know that teams are going to defensively stack against some of our players, so (setter) Ashlyn (Wiswall) just does a great job of mixing up the sets and keeping our opponents off balance,” Brenner added.

Unionville was somewhat fortunate to squeak out a win in an extended first set. The squad was clearly a bit nervous to start, and it showed with eight errant serves in the opening set.

“There was definitely some nerves early,” Brenner acknowledged. “One of the things we focused on was minimizing our errors, and once we did that it showed.”

In all, there were 14 ties in the opening set. And Unionville found itself trailing 21-19 before scoring seven of the final 10 points to pull it out. The first of two Brenner kills gave UHS its first lead, and then Wiswall helped close it out with a clever dink at 24-24.

“We made a lot of unforced errors in that first set,” Smith said. “But the girls wanted it and they were willing to fight for it.”

In set number two, the Trojans raced to a 5-0 lead, fought off a UHS comeback and wrapped it up with a 13-3 closing rally.

“It was motivating (in the second set) to get killed the way we did,” Brenner said.

“This is huge,” Brenner said. “I am just so excited and proud of the way my team is playing.”