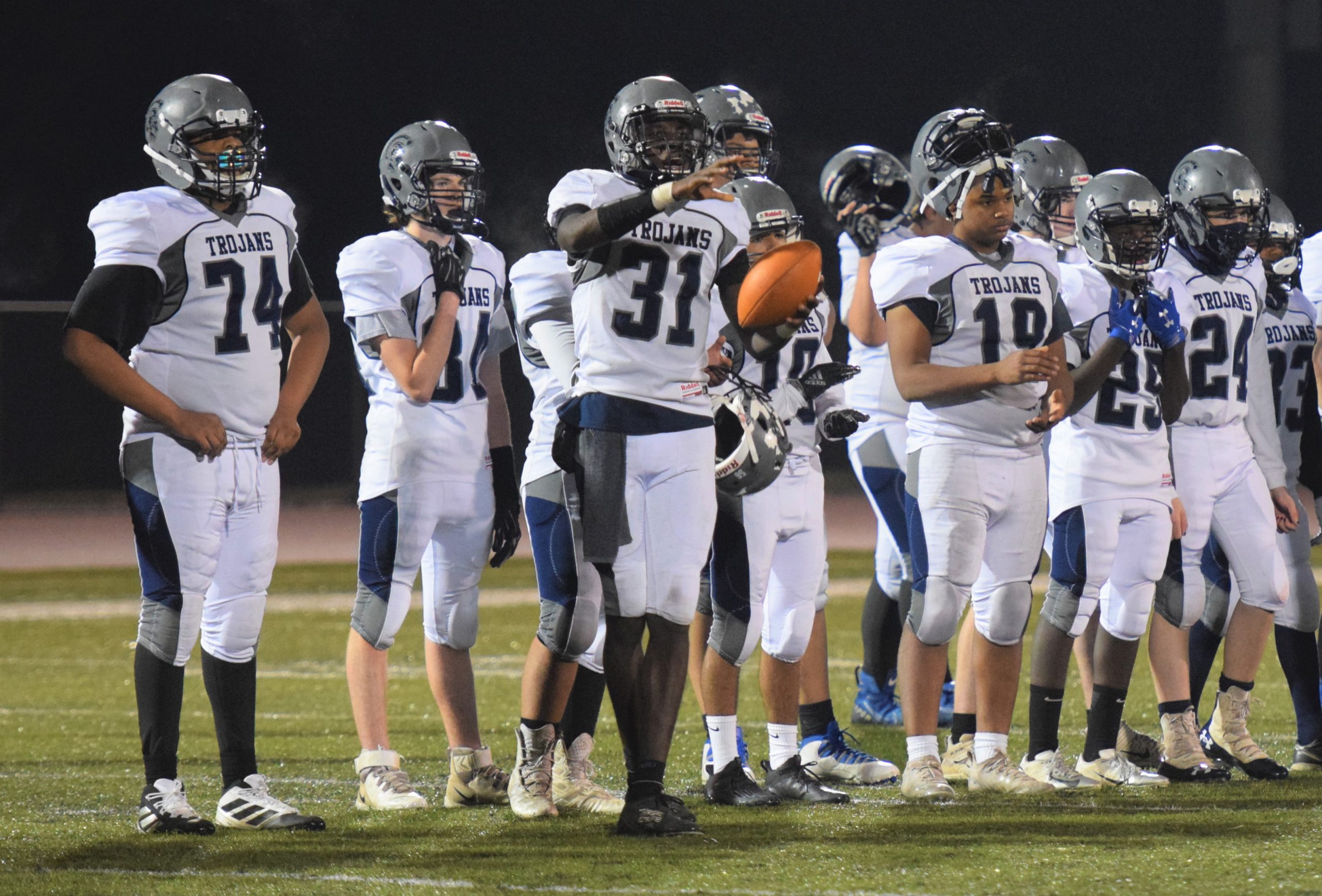 Last Friday night was fitting in a way only 2020 could comprehend.

The embattled high school football season had teams in The Mercury area converging on the final night after trajectories as varied as you could scheme up due to the COVID-19 pandemic.

There was Daniel Boone visiting Conestoga Valley as the Blazers closed out a 2-6 campaign that spanned nine weeks, the longest run for any local squad. Perkiomen Valley also extended its season with a trip to Quakertown and subsequent 35-28 comeback victory. It capped a 6-2 record, just two games short of a traditional 10-game regular season.

There was nothing traditional for the members of the Pioneer Athletic Conference that were concluding runs that only began in mid-October.

The Pottstown football team hopped on the bus bound for Phoenixville early Friday evening to finish out its abbreviated four-game season. At the same time two miles up the road, preparations should have been underway at Rick Pennypacker Field for Pottsgrove’s season finale against visiting Pope John Paul II, a game originally set for Oct. 9 but rescheduled due to a positive COVID-19 case among the PJP coaching staff.

Six Fridays later, the fate was the same. The Falcons-Golden Panthers’ meeting was cancelled again due to COVID-19 precautions related to positive cases around the PJP program, unceremoniously and painfully ending the season for both teams. Pottsgrove played four games and went 2-2; Pope John Paul II finished 3-0 including an attention-grabbing win at Perkiomen Valley on Oct. 30 but endured three cancellations in six weeks.

Pottsgrove’s Rick Pennypacker Field sat empty last Friday after the scheduled game between Pottsgrove and Pope John Paul II was cancelled due to a positive COVID-19 test. The cancellation ended the season for both teams. (Austin Hertzog – MediaNews Group file)

Throughout Friday, as Pottsgrove and PJP were left to find other plans or Pottstown and Phoenixville played out the string of their abbreviated four-game seasons, it was hard to believe the finish line of this turbulent fall was already here.

So turbulent in fact, I was left pondering: Was it all even worth it?

The final day merited reflection on the road traveled: the complete shutdown of last spring, the uncertainty of fall sports happening through July and August, the wrought school board meetings that decided the future of fall sports in August and September; the varied fates of schools in the PAC with 6 football teams given the go-ahead to start preseason Sept. 7 and games Sept. 25 while the others were sidelined indefinitely after having their seasons suspended.

For a month or more, they could only sit, wait and wish. Then, after 29 days for Pottsgrove and as much as 56 for Pottstown, their fates were reversed and they were afforded the chance to play beginning in mid-October.

Six weeks can feel like a year in 2020, but the memories of being told they would not have a season are still fresh for the players whose lasting impression is appreciation for getting to play the sport they love even for just a short time.

To put in the work at practice, to put on the pads and gameday jersey, to run on to the field and battle alongside your teammates even just once was enough to satisfy nearly every soul.

Pottsgrove’s Rylee Howard cuts back for a huge gain during the second half against Upper Merion. (Austin Hertzog – MediaNews Group)

Pottsgrove senior running back/safety Rylee Howard and his teammates had a case to feel among the most let down after having two games cancelled, but that’s not the lasting takeaway.

“Absolutely it was worth it. I’m just glad that we got a chance to prove something,” Howard said. “We were doubted definitely in the beginning of the season. We had a lot of doubts going into and at the start of the season and we battled a lot of adversity obviously with COVID and just doubt because we lost a lot of really good player’s last year and faced a lot of injuries this year. I was just thankful because I put in all that work in the offseason, and every player on that field put in all that work not even knowing that anything was going to happen.

“I’m going to be completely honest, from all the talk in the offseason, all of us were scared that we weren’t even going to have a season. We were working through the summer, 6 feet apart workouts, just battling all of that. I just feel blessed we got an opportunity to play.”

The only time the lights were on this fall at Pottsgrove, Howard ‘came out blasting’ in his words and ran for 149 yards and a touchdown to go with an interception on defense in a 20-7 victory over Upper Merion on Oct. 15.

Instead of running onto the field under the lights last Friday, Falcons players took to the field Thursday afternoon to take a moment together after learning of the news that their season finale was off.

“It was definitely difficult,” Howard said. “My last game ever at the home field, I know me and all my boys just wanted to ball out in our last game. Me and all the seniors, all the work we put in the four years we’ve been playing … I know all the underclassmen look up to us and we all showed great leadership. It was definitely hard hearing that game got canceled.”

Senior wide receiver/defensive back Jahzeel Watson, the undeniable leader of the team, found himself in unexpected positions this fall. An outspoken advocate for football competition this fall, Watson was interviewed by HBO’s Real Sports while Pottstown’s season was cancelled.

Last Friday he found himself in another unfamiliar spot: playing quarterback for the first time in his career.

After starter Mason Miller went down in the third quarter and backup Joneil Oister, the Trojans’ starting running back, went out with injuries, Pottstown was out of options. In stepped the 6-4, 165-pound senior who was a shining example of positivity amid an otherwise trying Trojans’ season.

“I made sure to stay optimistic. That was the goal throughout the entire year,” Watson said. “We were going to have ups and downs especially with a lot of young players coming in and the injuries that we had. We don’t have that many players so I made sure that my team was going to stick together the whole game and ball out.”

After throwing a 16-yard touchdown pass to Rashean Bostic to get Pottstown within a score of the Phantoms in the fourth quarter, a storybook ending almost seemed destined for Watson.Instead, Phoenixville stood tall with its seniors getting to bask in the victory. But even through an 0-4 run, a win was already secured in Watson’s eyes.

For Phoenixville and especially its seniors, Game 4 meant a great deal.

Senior captain Aidan Foley, a running back/linebacker, patrolled the sidelines on crutches (he suffered a Lisfranc fracture in his right foot against Upper Perkiomen on Oct. 30), locked into every play as the Phantoms attempted to finish .500 for the first time in his career.

The Phantoms got their wish, a fact not lost on senior lineman Liam McAdam. At left tackle, McAdam paved the way for Owen Koch’s 154-yard, three-touchdown night that carried Phoenixville to its 2-2 finish.

McAdam was overcome with emotion as he sang the alma mater arm-in-arm with teammates, walked through the senior guard of honor, and took a moment to kneel alone in the middle of the ‘P’ at midfield.

“I love this sport. Ten years playing this,” said McAdam. “I love all my guys. Our goal was to come out and play, give 150 percent. I’m proud of everybody.

Phoenixville seniors Nolan Martin (68), fifth from left, and Liam McAdam (66), sixth from left, led the Phantoms during the alma mater after winning their season-ending game over Pottstown on Nov. 13. (Austin Hertzog – MediaNews Group)

Appropriately, players on late-returning teams didn’t view their seasons as being short-changed. They were a ‘second chance.’

“There was a time where we didn’t have a season,” said McAdam. “We were all bummed and there were so many lows. Hearing that we were canceled, I think all of us were bummed, but we got a second chance and everyone was pumped. We took the second chance super seriously. I couldn’t ask for better teammates to do it with.”

While student-athletes were universally grateful to get to compete in football this fall, much more than game day goes into building the foundation and success of a program. Differing health and safety protocols and return-to-play timelines made for disparate circumstances for the area programs. Coaching staffs faced unique challenges of team building, restricted time and access to weight rooms, and inability to work in large groups, which understandably hindered progress while playing amid the COVID-19 pandemic. Those topics and more will be explored in part two of this story tomorrow.

Austin Hertzog is the Sports Editor of The Mercury. Email him at ahertzog@pottsmerc.com

HECKENBERGER: COVID is story of season, but it’s the players who will redefine 2020 in our memories
2020 All-Pioneer Athletic Conference Boys Soccer Teams