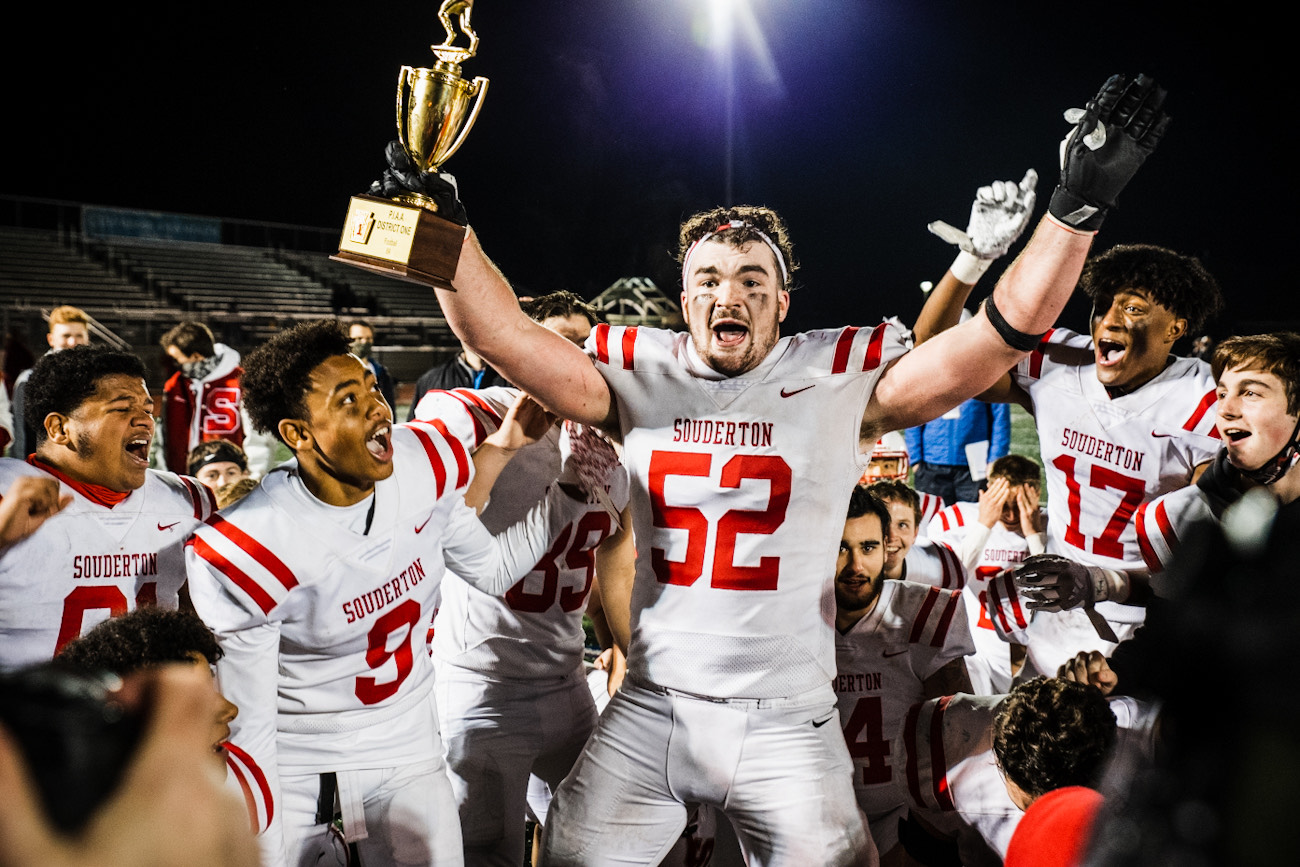 EAST ROCKHILL >> If people still have doubts about the Souderton football team, the Indians offer the nice trophy they claimed Friday night as rebuttal.

Jalen White, Brayden Porter and the Big Red rushing attack churned out chunks of yards behind its stout offensive line. The Indians defense, meanwhile, limited host Pennridge’s big plays as Souderton captured the program’s first-ever District 1 championship with a 31-17 victory in the Class 6A final at Helman Field.

White and Porter both eclipsed 100 yards on the ground for the No. 3 Indians (7-0), who pulled away in the third quarter after the top-seeded Rams (6-1) took advantage of a Souderton fumble to cut the margin to 17-10. The Indians answered with back-to-back touchdown drives to go up 31-10 then held on to earn the district crown along with a third consecutive win over its rival.

Souderton’s Jalen White (7) shows his emotions as he raises the District 1 championship trophy after the Indians’defeating Pennridge in the Class 6A final on Friday, Nov. 13, 2020. (James Beaver/For MediaNews Group)

“It feels amazing,” White said. “And I kept saying this all night, coach (Elijah) White has emphasized from freshman year that we need to leave this program better than we found it and that’s what we did. I’m so proud of these boys. It was a team effort tonight. I could not have done it without them.”

White ran for a game-high 144 yards on 25 carries and scored a pair of first-half touchdowns while Porter posted 101 yards on 15 carries. Quarterback Evan Kutzler and Shaun Purvy added rushing TDs after halftime as Souderton racked up 313 rushing yards in advancing to the PIAA-6A semifinals to face St. Joseph’s Prep. The Hawks are two-time defending 6A state champs and ranked third nationally by both Maxpreps and USA Today.

“This is the first time either school was in the district championship,” Souderton coach Ed Gallagher said. “To play these guys, with (Pennridge coach) Cody (Muller), who I love and (Pennridge assistant) Chuck (Muller), his dad, who I love. One I coached, one I coached with for years. My cousin’s kid plays nose guard for this team, there’s so many different connections here – this was important.

#FOOTBALL: Souderton receives the District 1 trophy after defeating Pennridge 31-17 in the Class 6A final. pic.twitter.com/pTJdQ9ejdN

Dillon Powles finished with 118 yards and a touchdown on 12 carries for Pennridge, which could not come up with the explosive plays it had in its semifinal victory over Coatesville as the Rams were held to their lowest scoring output of the season.

“We really just had to keep contain and we really just had to stop that run game because they had some really big kids,” Souderton senior Jacob Horton said. “Once we stopped the run game we had to make pass which is their weaker thing to do. So we just needed the inside to do what they needed and we did it and it all worked out.”

Pennridge produced just three plays of 26 yards more, none of which came from the passing attack, which registered only 29 yards on three completions. The Rams finish their season visiting Quakertown in the team’s traditional Thanksgiving Day game.

“Our defense has been really good all year,” Gallagher said. “Again, Mike Heath always puts together a good game plan. Our goal tonight was to stop the run and force them to beat us throwing the ball. I think that was Coatesville’s game plan last week as well and Pennridge executed in the passing game better last week than they did tonight.”

Shane Hartzell had the Pennridge’s longest play of the night early in the third quarter. Souderton led 17-3 at halftime but on the opening drive of the third fumbled the ball away at its own 47. The next play, Hartzell took a direct snap and dashed 47 yards to the end zone, pulling the home side within seven at 10:39.

A week prior against Spring-Ford in the semis, the Indians led 20-0 at halftime but had their lead whittled down to 20-17 in the fourth before holding on for a 27-24 win.

After Hartzell’s TD Friday, Souderton averted danger by recovering its fumble on the ensuing kickoff then proceeded to put together an 11-play, 82-yard drive to regain the 14-point edge. Porter almost capped the series but was ruled down at the Rams 1 for a 19-yard run. Kutzler plowed over the goal line from a yard out the next play at 6:05 in the third.

“When we took over I’m like all right let’s not make this into a Spring-Ford situation,” Kutzler said. “But we’ve been through it before and we hit adversity and our team is definitely we’re going to get over that adversity. So you could tell in the huddle everybody had a lot of confidence to make that drive happen and once we started driving I knew we would look back.”

#FOOTBALL: 6:00 2Q Souderton 14, Pennridge 3. Jalen White gets through traffic & goes down the sideline for a 60-yard TD run. pic.twitter.com/fLdyGJNd1X

After forcing a Pennridge three-and-out, Big Red grabbed its largest lead of the contest with a seven-play, 56-yard drive. Porter moved the chains with a pair of 3rd-and-1 runs – the second time for an 11-yard gain to reach the Rams 12. The next snap, Purvy spun to evade a defender in scoring on a 12-yard TD run with 1:18 left in the third for a 31-10 advantage.

“When we fumbled and then they scored, I’m sure everybody got down a little bit,” White said. “But that’s what happens in football. It’s adversity and you have to face adversity and that’s what we did and I’m so proud of my boys.”

Pennridge had two more possession in the final quarter but punted on the first then on the second came up two yards short on 4th-and-10 to give the ball back to Souderton at the Big Red 46 with 4:12 remaining. The Indians proceeded to run out the rest of the clock.

Souderton poses with the District 1 championship trophy after defeating Pennridge in the Class 6A final on Friday, Nov. 13, 2020. (James Beaver/For MediaNews Group)

The Rams took their only lead on Friday night’s opening possession – driving 66 yards on 10 plays to go up 3-0 at 7:41 in the first quarter on Brandon Shire’s 28-yard field goal.

Souderton, however, responded by eating up the almost the rest of the period to go ahead 7-3. The Indians went 67 yards on 14 plays – 13 of which were runs – in 6:47, White finishing the drive with his six-yard TD run with 50 seconds left.

“We stayed on our script and pretty much went through the things that we thought we were going to get from them,” Gallagher said. “We knew they were going to overplay Jalen on the sweeps so we ran a bunch of traps with Porter in the middle and popped a couple different things off of our little wider sets, we went to our spread sheets and did some speed things to kind of get their eyesight off.

“And Jalen ran hard, Jalen ran possessed until he started cramping up. He was not being stopped in that first half.”

Pennridge moved the ball to the Souderton 30 on the ensuing series but threw incomplete on 4th-and-4 from the 30. Four plays later, White increased Big Red’s lead to 14-3 as he escaped a few Rams’ grasps then raced down the sideline for a 60-yard touchdown run with 6:00 before the break.

“I slipped through some tackles and I want to give thanks to my lineman Jake Calin, he pushed me forward a little bit when I was stumbling,” White said. “But, yeah, that was a heck of a run.”

A Purvy interception gave Souderton the ball at its own 44 with 2:28 remaining in the half. On 4th-and-1 from the Rams 33, White picked up six on the ground while three plays later a late hit flag on the Rams put Big Red nine yards from the end zone.

A holding penalty negated a TD pass but Souderton ended up adding to its lead when Nick Haynes knocked through a 30-yard field goal with four seconds left to make it 17-3.